I don't know the date I was diagnosed with Type 1 diabetes, as so many of my peers do. But I do know this month marks my 40th year with diabetes.

I got it when I was 18 in 1972. I also remember when I was 37 years old thinking, "Wow, I have lived longer with diabetes than without." Trust me, that's an awesome thought.

When I was diagnosed it felt unreal. After months of being thirsty and peeing, which I dismissed, I woke up in my parent's house on a break from college with another symptom I'd been having -- excruciating leg cramps.

A simple blood test in the doctor's office revealed my blood sugar was 750 mg/dl (41.6 mmol/l). He told me, "Two more weeks and you would have died."

When I left the hospital -- that's where they put you years ago -- I went to two places simultaneously. I went back to college and into denial. I spent a good decade in denial; it was easy. There were no blood glucose meters and I was told to take one shot of insulin a day.

I got interested in helping others with diabetes nine years ago. Before that I was a successful ad copywriter and change communications consultant.

But at 48 years old two things happened. I was getting married for the first time (my husband still chokes when I say that thinking I may be planning a second time) and I went to a diabetes educator after having diabetes 32 years. Not wanting to burden my husband with an unhealthy wife, I began to learn all I could about diabetes, and then I wanted to share it.

I don't know what my life would have turned out to be if I hadn't gotten diabetes. I don't know what I'd be doing now or if the man I might have married would be as kind as the one I did. This one tucks glucose tablets into his pockets when we go out for a walk in case I have a "low."

A young woman I interviewed several years ago said to me, "I don't know who I'd be without diabetes and I really like who I am." Yep, I get it.

If I could go back all those years ago and choose not to get diabetes, would I? Sure. But since I can't, I do my best to live with it responsibly, use it to do good and be mindful of the positive things it's given me.

Beside my husband, I have incredible friends and generous peers. I've discovered that while I grew up shy and quiet, I love addressing carnival-size groups of patients and medical professionals.

I've written two books (they're down there below the post), contributed my life's story to a third, "My Sweet Life: Successful Women with Diabetes" and written numerous articles in magazines and on my blog.

I'm spreading a concept that I know is just ahead of the curve, but I can't stop. It's that we can "flourish" with diabetes, not just "cope." That we can have a great life, not despite, but because of diabetes. I know this because I've interviewed more than 150 patients, and I live it.

I love when talking to parents who have a child with Type 1 diabetes to see relief flood their faces as they look at me thinking maybe their child really will be OK. I have laughed (well, afterward) when a bunch of wheelchairs, commandeered by cerebral palsy patients, raced past me to get to the cake table during a diabetes talk I was giving.

This month also marks my anniversary here. Two years ago this month I began writing on The Huffington Post.

This year I will continue to bring you information about food, about news, about change leaders you may have never heard of, provocative ideas, and will likely stand against the tide, hopefully make you laugh, and say what gets under our skin again and again.

Right now I'm working on a book that will serve as an "owner's manual" on how to live a healthy life with diabetes. It will be sharp, clear and grounded in the everyday reality of living with this disease as I do.

I'm currently fulfilling another desire: to help patients and health care providers work together more successfully. I'm working with QuantiaMD on a series called "Ask the Patient" that will soon go live.

I'll continue to deliver the A1C Champion peer-mentor talks I've been giving for the past five years and coach individuals to better manage their diabetes. 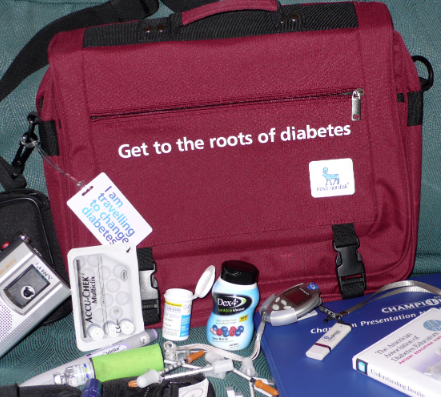 What are you traveling to do?

What are you traveling through life to do?

Will you do anything different this year to take care of your health?

What's on your mind about life, health, where we're headed?

Do you want to see something in particular in this space?

I'd love to know what's up for you and what you're thinking.

Postscript: mg/dl is used in the U.S. and mmol/l outside the U.S. as a measurement of blood sugar. As someone with Type 1 diabetes I check my blood sugar four to 10 times a day, every day.

Riva speaks to patients and health care providers about flourishing with diabetes and is the author of "50 Diabetes Myths That Can Ruin Your Life and the 50 Diabetes Truths That Can Save It" and "The ABC's Of Loving Yourself With Diabetes." Visit her website DiabetesStories.com.

More:
type 1 diabetesDiabeteshealthy livingliving with diabetesCareers
Newsletter Sign Up
The essential guide to taking care of your mind and body
Subscribe to HuffPost’s wellness email
Successfully Subscribed!
Wellness delivered to your inbox