The first thing to know about Charles Mattocks is that his passion for educating people with diabetes is fierce; it buzzes at me through the phone line. Like his famous reggae musician uncle Bob Marley, he is championing social change -- in diabetes. His ammunition? A bus, a film, healthy, affordable food and unbounded passion. 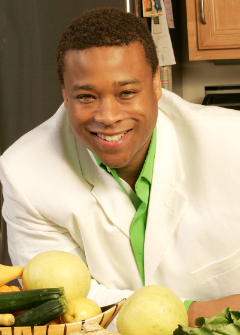 Charles Mattocks is the 17th in my series on diabetes change leaders.

RG: You say not knowing what diabetes was as a black man in his late 30s is a sad situation in America. Why is that?

Charles Mattocks: Because diabetes is so prevalent among blacks and Hispanics, and we don't know what it can do to us. I thought my symptoms were signs of a urinary tract or kidney infection even though I grew up with an aunt who had diabetes.

We just call it "having sugar" and dismiss it. I worked with rap star Shorty Low, who was hospitalized for diabetes twice. I asked him "Shorty, are you worried about your diabetes?" He said no. The fact that he's not worried alarms me.

A lot of people are living like that, especially in minority communities. You don't see your diet causing your diabetes, your high cholesterol and bad blood pressure. You don't see the effects of this disease until it's too late. You know,you can eat chocolate cake and you're not going to die -- well, not that day.

RG: When you were diagnosed with Type 2 diabetes a little more than a year ago, you were making a name for yourself as "The Poor Chef" helping people cook healthy on a budget. What's different now that you have diabetes?

CM: I learned I didn't know what healthy was. I look back now at a piece I did on The "Today" Show with Al Roker. I put sugar, beer and bread in the dish I was making and thought that was healthy. I thought drinking juice was better than soda. Now I'm a vegetarian. I don't eat sugar or starchy carbs and I try to leave the salt on the table.

RG: Is it realistic to expect others to eat like that?

CM: No, but they can do what I'm teaching. Make simple meals and eat more fruit and salads. People think you have to eat cardboard. It's not true, just take some greens, chickpeas, tomatoes, and onions, toss, and make an olive oil and vinegar dressing. That's a tasty dish. It's about adding a lot of flavors and spices.

I also helped develop a premium chocolate bar so people can have something sweet and healthy. The Charles Bar -- it's sugar free, gluten free and low in carbs.

RG: You do cooking demonstrations on TV and throughout small towns. You're equipping a diabetes bus to cross the country checking people's blood sugar at sporting events, schools, malls and churches. What drives you?

CM: I'm the nephew of the legendary Bob Marley. He was about social change and I always wanted to do something special. When I was doing "The Poor Chef" I thought I was really helping people. Until I got diabetes.

I want to open peoples' eyes to what this disease can do. I want companies to do more to help. Our bus is committed to testing 500,000 people in the next two years.

I want to change some injustices too. Pharmaceutical companies take in billions of dollars. I think they should be held accountable for giving back and educating people like tobacco companies had to change the information on a cigarette pack. If people aren't taking their meds or testing their blood sugar, and learn how important it is, pharmas will make even more money.

RG: Where does the money come from now that funds your work?

CM: We do deals with some great companies that believe in us, or they take ads out on our website. We've also had some small contributions. We're borrowing from Peter to pay Paul. But we keep working hoping to get more money to keep going.

RG: What surprises you as you travel the country talking to people?

CM: That there's no "smoking gun" but ourselves. A lot of people are trying and taking steps every day to be responsible for their health but I'm concerned about those who don't think this is serious. We have the key to a healthy future but too many people aren't picking up that key.

I can't be like Michael Moore and blame the food industry or fast food, because we each have a choice whether we go into McDonalds or not, and about what we put into our bodies.

But we need to get the word out about what diabetes can do to you. And we need to support each other in our communities. My good friend died at 52 from Type 2 diabetes; it didn't have to happen.

RG: What do you think makes it so difficult for people to change how they eat?

CM: We live in a society where you have to work really hard to be disciplined about your food. Abundance is everywhere, and indulging is easier than taking care of yourself. But I see something waging war against my body. For me, it's me or this disease.

RG: Should the government play a bigger role in diabetes awareness?

CM: I'd like to see public service announcements (PSA) about the seriousness of diabetes and obesity. Let people know what can happen to you if you don't take diabetes seriously.

RG: I'm going to challenge you on this. Most people think PSAs, which typically scare us, are going to get people to change behavior. But scaring people only works temporarily. More often it scares people into denial because they don't want to look at something frightening for long.

CM: You're right and I agree with you. I don't mean we should totally jump out of the bushes on people, but we need to make them seriously aware of what diabetes can do to you. I made a film, "The Diabetic You," that will be out next year. The trailer starts with a guy with no teeth. Immediately people think, "Oh my god, this is what diabetes can do?" Now I have their attention. But then the film also shares some great, inspiring stories.


RG: What else do you think needs to change?

CM: We need to get some fresh faces and new ideas out there. Whatever's being done to spread awareness isn't working. You know the TV show dLife, but most people have never heard of it.

They just paid Paula Deen more money than most of us will see in a lifetime, and they'll spend even more trying to get her to create awareness. But her coming out looks to me and a lot of folks like it was motivated by money, not her heart.

Let's put awareness into the hands of people with diabetes who have a real passion. Give me a million dollars and I'll get my bus, be all over the country and on every TV show. I'll be doing everything I can so me and my team can meet people where they live.

Last year I spoke at a diabetes convention. I told the folks I was bringing some fire with me, but they didn't believe me and I didn't see an openness for it. I saw that diabetes was a business.

RG: Why do you do this work, what do you hope for?

My uncle inspired me to not just speak the change but be the change. I know I can talk, but our film will be out there and our bus will be on the road. I'll keep turning over every rock and stone so I can leave something better for someone else.

Riva speaks to patients and health care providers about flourishing with diabetes and is the author of "50 Diabetes Myths That Can Ruin Your Life and the 50 Diabetes Truths That Can Save It" and "The ABC's Of Loving Yourself With Diabetes." Visit her website DiabetesStories.com.