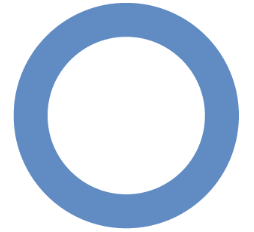 This is the universal symbol for diabetes. Yet, while the blue circle became the global symbol in 2007, it's been fighting a battle to gain that recognition among diabetes organizations in the U.S.

Why does that matter? Think pink ribbon. You thought breast cancer, didn't you? That's the power of one unifying symbol for a disease. Such a symbol can potentially generate greater prevention and care efforts, treatment advances, and more funding for research and a cure.

The Blue Circle was created by the International Diabetes Federation (IDF) in 2006 as part of a campaign urging the United Nations to pass a resolution to recognize diabetes as a serious global health threat. The IDF was successful. According to the International Diabetes Federation, UN Resolution 61/225 recognizes diabetes as debilitating and costly, and encourages all nations to develop prevention and treatment policies. It also designates November 14 -- the birthday of Frederick Banting, one of insulin's discoverers -- as World Diabetes Day to be recognized by the UN.

The blue circle became the official logo mark for World Diabetes Day, and the universal symbol for diabetes. Yet only the American Association of Diabetes Educators (AADE) adopted the Blue Circle as such.

Sandra Burke, AADE's President, said, "When you see the pink ribbon, the automatic recognizable symbol for breast cancer, you're reminded breast cancer is serious. When people look at the Blue Circle we want them to be able to say, this is about diabetes, a disease that kills even more people than breast cancer. We need to solve this."

"By universally accepting a symbol for diabetes," says Burke, "we have the beginning of developing a unified message that diabetes is serious and widespread. As an association, the AADE can use it to deliver information, and when we all go to Capitol Hill we can say to our legislators, this is the blue circle, this is what it means and this is why it's important to your constituency. That's the power of one symbol."

I couldn't agree more. So, why haven't any other American diabetes organizations adopted the Blue Circle as the symbol for diabetes?

For me that begs two questions: 1) Why can't organizations use the blue circle along with a campaign symbol? 2) Are diabetes organizations at times more me-focused than mission-focused? 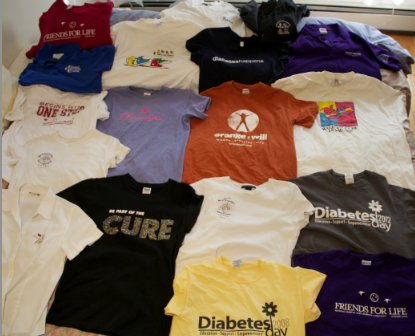 My T-shirts represent a dozen different diabetes-related organizations -- and appear to represent as many different causes.

Yet if each displayed the blue circle, it would create immediate recognition and awareness for a united cause -- to prevent, manage and eradicate diabetes.

Lori Weintraub, APR, vice president of marketing and communications for the Diabetes Research Institute Foundation (DRIF), says managing many symbols can be problematic.

The organization has its own logo, another since the DRI is part of the University of Miami Miller School of Medicine, plus specific campaign and event logos. 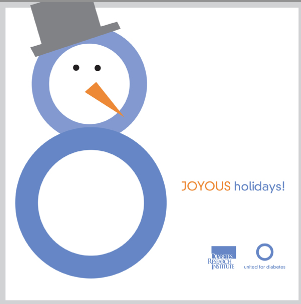 But, Weintraub said, the DRI has frequently made use of the blue circle alongside its logo and other campaign marks in its materials (like its holiday card here, which I love), videos, and last year's "Reason to Believe" campaign.

"If we all came together to use the blue circle I think it would benefit everyone," Weintraub said.

A common symbol helps patients feel less alone and that someone's working on their behalf.

It reminds the public that diabetes is serious and needs to be cured. That reminder, and that we can find a cure with people's help, would certainly benefit the DRI."

Weintraub thinks the problem in getting everyone to use the blue circle is reaching agreement how to use it so that it doesn't compromise or confuse one's brand.

Jeffrey Brewer, President and CEO of the JDRF spoke about a different obstacle -- the concern that under a universal symbol for diabetes, since diabetes is so commonly associated with Type 2 diabetes, that Type 1 diabetes will become less visible.

"We're very supportive of raising awareness of diabetes and the impact of the disease," said Brewer," but many of our constituency want to have a separate identity for Type 1."

Brewer does, however, see an advantage using a universal symbol for funding around complications. "Complications of living with high blood sugar," says Brewer, "are the same whether you have Type 1 or Type 2. To the extent that a common symbol would bring more funding and energy to this area of research, it would benefit JDRF."

"So, I agree the symbol can offer value in collaborating to raise awareness and drive funding, but I'm not convinced that its broad use will significantly advance awareness of Type 1 diabetes, which is one of my goals at JDRF."

With diabetes threatening our health, our lives, our economies, our health care resources, I'd love diabetes organizations to come to the table and have the conversation Weintraub suggests about how each can use the blue circle in a way that doesn't compromise their own brand -- and makes diabetes instantly recognizable and significant.

I also know two things. One, things don't happen until you decide to make them happen, and two, we are stronger together.

If you want to show your support and use the blue circle, click here.

What do you think? Would having a universal symbol raise diabetes awareness?

Would it lead more people to take preventative measures?

Would it accelerate new treatments?

Would it lead to more research funding?

Do you believe we are stronger as a whole? 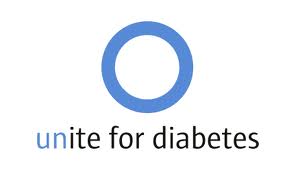 Riva's new book, Diabetes Dos & How-Tos, will be available this November, along with 50 Diabetes Myths That Can Ruin Your Life and the 50 Diabetes Truths That Can Save It and The ABCs Of Loving Yourself With Diabetes. Riva speaks to patients and health care providers about flourishing with diabetes. Visit her website DiabetesStories.com.