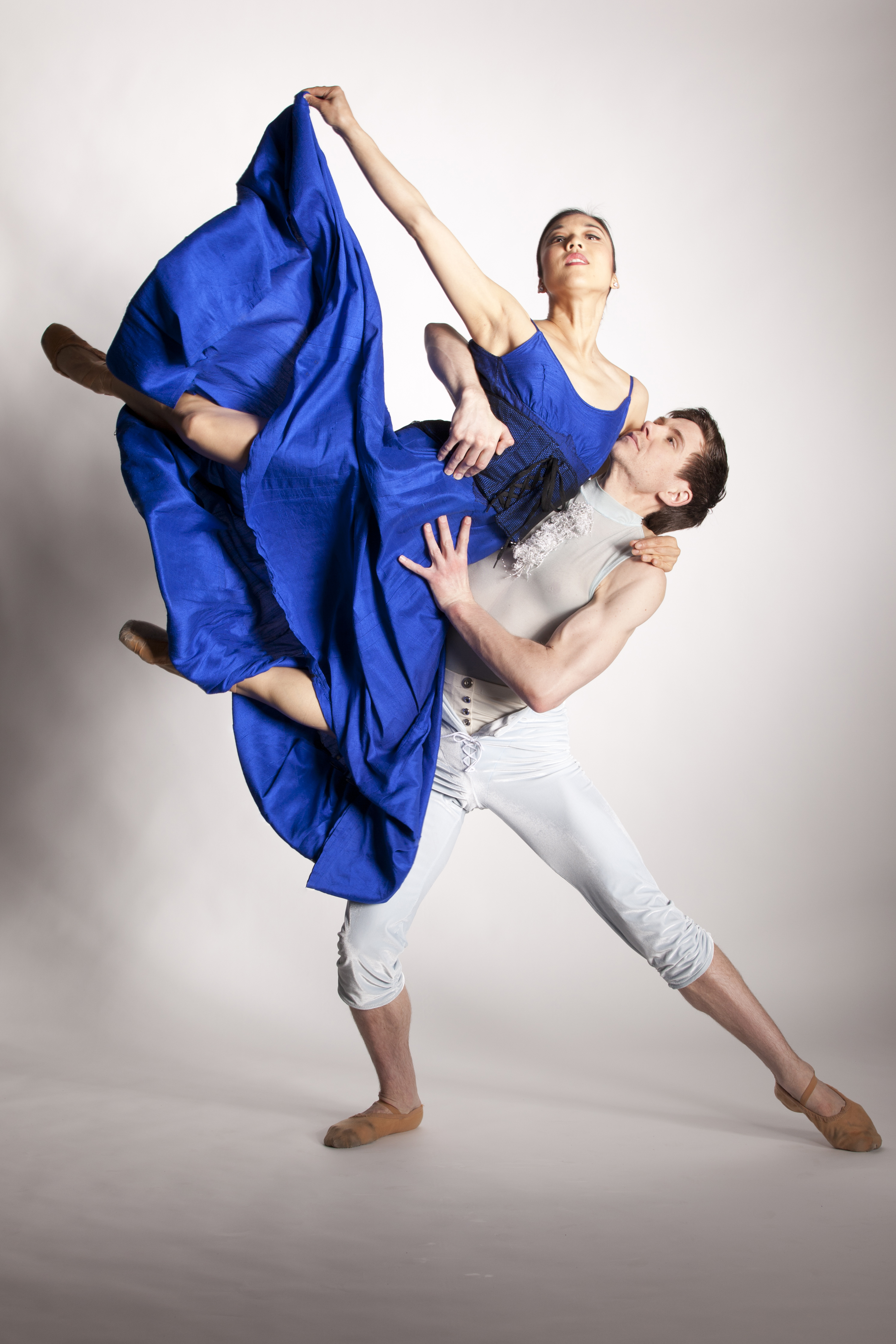 Diablo Ballet kicked off its latest program with all-American live-wire choreographer Trey McIntyre's homage to the 18th century Gainsborough portrait, The Blue Boy. Not your typical McIntyre knock-your-socks-off athletic enterprise but a delicate, neoclassical pas de trois set to the rhapsodic second movement of Beethoven's Piano Concerto No. 1 from the era of Gainsborough. Diablo Ballet's Robert Dekkers makes a striking and graceful Blue Boy, well aware of his privileged station in life but utterly charming. He flings his arms open as if to embrace the audience, and is sweetly attentive to his two muses, danced assuredly by Hiromi Yamazaki and Mayo Sugano. Rapid changes in body facings, twists on classical port de bras and silhouettes, and the elegant costumes by Liz Prince remind us that this is a contemporary, not a period piece: Yamazaki in a glamorous swirling gown and Sugano in a more athletic shift faintly suggestive of the goddess Artemis, hunter and protectress. A bracing opener to Diablo Ballet's 19th season. It was particularly delightful to see The Blue Boy up close in the intimate setting of Diablo's 'Inside the Dancer's Studio' format, to take in details of the partnering mechanics, the warm, vibrant expressions on the dancers' faces, and their beautiful physiques.

A jazz trio led by Greg Sudmeier added a spark to the middle offerings on the program: David Fonnegra's La Covacha and the pas de deux from Sean Kelly's Sinuosity. The arrangement of music by Enya for the latter was particularly riveting, as were Sugano's gorgeous insteps. Once again, she and Dekkers showed off their impeccable classical technique and elegant lines in this seductive duet. 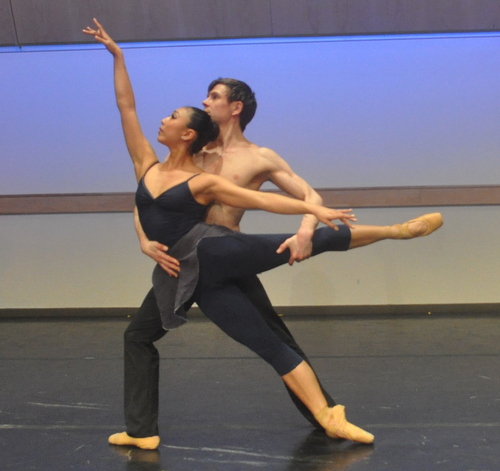 La Covacha is a romp that teeters on the edge of cliché, with its easy-listening arrangements of Latin jazz and the distracting fringe on the women's dresses. All that sassy hip action on pointe and smouldering partnering are no longer very original, but Fonnegra expertly adorns conventional steps with unexpected flourishes that add poignancy to the moment -- like piqué turns accompanied by a hand swiftly passing over the brow. The execution was crisp and often delightfully self-mocking.

The program closed with the highly anticipated Twitter-inspired ballet, Flight of the Dodo by Dekkers, set to Vivaldi's caffeinated Double Cello Concerto. Although very much in the modern ballet idiom, this is also a story ballet in the classical tradition -- one that employs mime to advance the plot, divides the action into three distinct acts, and uses birds as the main characters in an allegory about the failings of man (reminiscent of Swan Lake and Firebird.) Witty costuming and gender-role reversal spice things up: the male Dodo birds near-naked in the barest of nude-colored tutus with eye-catching pale blue neck ruffles, and the female Explorers in khaki shorts and button-down white shirts, leather straps, goggles and amusing, painted-on moustaches. 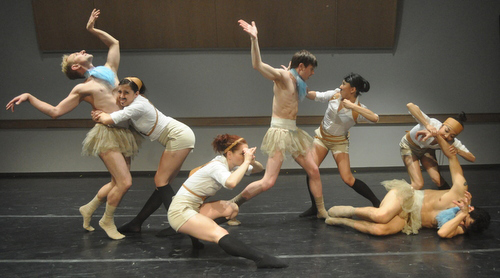 While entertained by the Explorers' comic shenanigans in the first movement, we feel the tension grow as they get closer to trapping one of the Dodos, with Dekkers exploiting the menacing undercurrent in the music. The transition to the Adagio movement is masterful, and the entire second movement with its imaginative depiction of the Dodo's torture by the Explorers, now morphed into mad scientists, is breathtaking and terribly sad - a representation not only of the killing of the Dodo but also of the cruel experiments conducted on animals by the cosmetics and pharmaceutical industries. Contributing to the overwhelming sense of anguish is the low, mournful sound of the solo cellos, enhanced by ingenious lighting from low-tech flashlights and headlamps wielded by the Explorers.

The ballet loses some steam in the third movement, in which Dekkers is obliged to kill off the rest of the species; the music shifts to a sprightly Allegro and the choreography hews too closely to that of the first movement. After the abrupt, dramatic shift from first to second, I was looking forward to another sharp refocus rather than more of the same. The final moment when the Dodos dropped dead - to the great bewilderment of the Explorers - didn't register as strongly as it should have, given the frenetic pace of the action leading up to it.

However, the ballet overall is a work of mad genius, the Adagio on par with the transcendent Swan Lake pas de deux in which Prince Siegfried is hopelessly attracted to the fragile, shimmering Swan Queen, and the story-telling and choreography at times reminiscent of Balanchine's Firebird, with its comic-grotesque designs by Chagall. This is a work that ideally belongs on an opera house stage, its power more fully unleashed by a phalanx of Dodo birds (as in Matthew Bourne's all-male Swan Lake or Alexei Ratmansky's Firebird) facing off against an army of Explorers. The tiny Diablo Ballet boxes way above its weight class, however; long may it continue to commission choreographers with the penetrating story-telling powers of McIntyre and Dekkers.