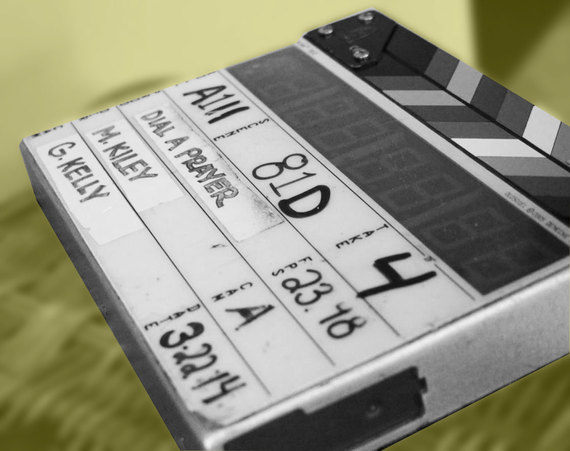 In February 2014, I received a text from Jason Potash, producer of Storyboard Entertainment's Dial a Prayer. "How old is your house?" I wrote back "1929." He was back home in Detroit with writer/director Maggie Kiley, and they were scouting locations for their upcoming film to be shot in the area. They stopped by 90 minutes later, and while our old house didn't make the cut, we ended up dropping in on nine other friends in Royal Oak that same night -- two of their houses ended up in the film, one by pure chance.

We were stepping out of my friend Micah's brick home on Hawthorne when I pointed to a white bungalow across the street, figuring they'd be interested in an L.A. connection, "That's where my former student Kasey Bell grew up; He works on Family Guy." Maggie and production designer Lauren Fitzsimmons glanced up and then at one another. "Do you think we could look inside?" While they waited on the chilly sidewalk, I hesitantly knocked on the door. Kasey's mom answered, "Mr. Walsh?" -- we probably hadn't seen each other since parent-teacher conferences in 1997.

"Come on in -- everybody!" The house was exactly what Maggie needed for her character Siobhan. "Sure, sure, you can use the house. I might be at work, but I can leave the key for you!" Micah's house did end up working out great as the dressing room and craft-services location for the house across the street. 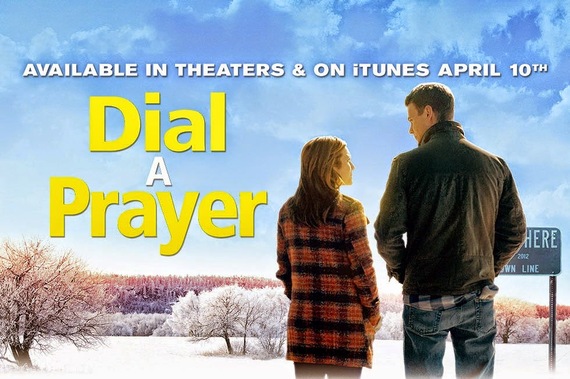 Dial A Prayer is the story of the unsought redemption, of Cora (Brittany Snow), given a second chance via community service in a religious call-center. It's a rough fit, particularly given the overly-warm reception she receives from the center's director Bill (William H. Macy) and the rest of her happy co-worker "freaks" -- including Siobhan (Kate Flannery).

To compensate for $20 million-less in the budget, Flannery points out, it takes a lot of special efforts on all fronts -- as well as some good fortune.

As the film shot over four weeks in March 2014, here are few of the pieces that fell nicely into place. 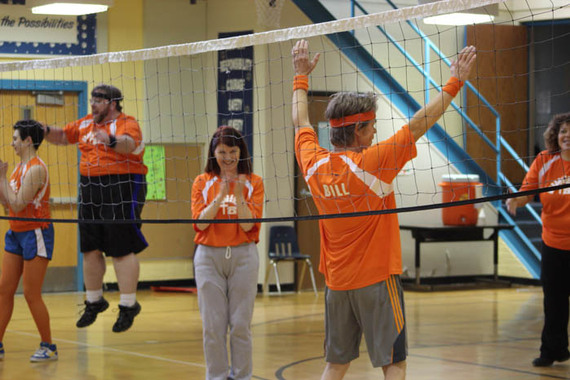 Big Stars for Little Films. Just as Flannery is often sent complimentary small bottles of booze on her air travel in homage to her alcoholic Meredith from The Office, actors are generally linked to their roles. Dial A Prayer has two stars that bridge 60 years of film audiences. Ask anyone over 30 about William H. Macy, and they'll say Fargo, Cake or Shameless. Ask anyone under 30 about Brittany Snow, and they will the most likely answer will be Pitch Perfect or Hairspray. 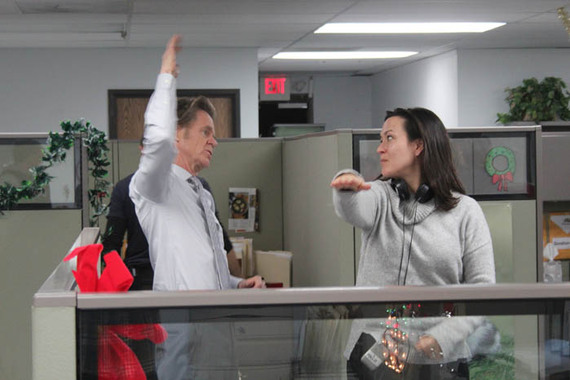 Kiley met and studied under Macy at NYU and at as an ensemble cast member of Macy's Atlantic Theatre Company (link to IAEMagazine.com interview with Kiley), he expressed interest in working in one of her films -- and his character, Bill, was written with him in mind.

"Actors love Maggie and they want to work with her," Potash states. She understands them because she's been there. And watching her on the set working through some difficult emotional scenes from her script, her deft handling and empathy was evident to the entire crew. One of the bigger challenges for any indie film is to have it seen -- and, including actors such as Macy, Snow and Flannery along with Tom Lipinsky and Glenne Headley, speaks to the trust that established professionals have for Storyboard and Kiley.

Got a Spare Call-Center Handy? Dial A Prayer's most vital location is obviously a call center. The locations and art department need to find a call center, construct their own -- with expensive cubicle and furniture rentals -- OR have one fall in your lap. 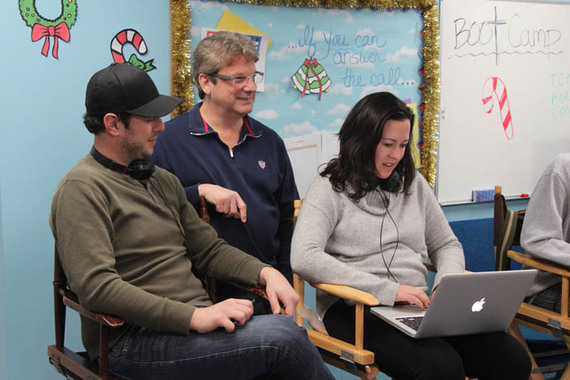 Paul Finkel, Potash's partner at Storyboard owns commercial real estate in the Detroit area, who, unfortunately for him and fortunately for the film, had a tenant leave its lease in Troy -- along with some side offices, a main room and lots of cubicles. Under the guidance of Fitzsimmons and some borrowed appliances, the dusty remains were transformed into the sunny, colorful main setting of Dial a Prayer in just a week with some willing hands, lots of power drills, a few new walls and amazing carpet restoration. 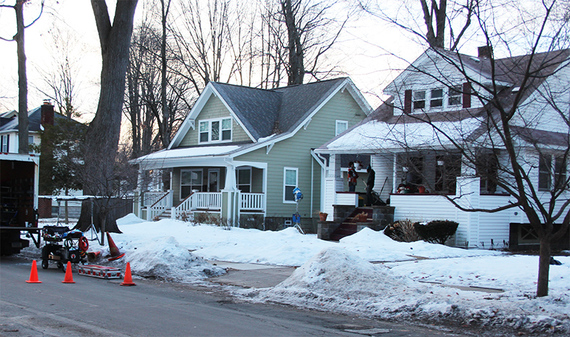 Snow in March -- in Michigan? Michigan's Christmases are occasionally white and January and February are certainly so, however it can be a gamble to hope that snow will remain through April 1st, even thought it is a major player in Kiley's script. But thanks to the polar vortex of 2014, the weather obliged -- even with the readjustment of most of the interiors being shot first to allow for Macy's shoot-schedule.

Only one snow-storm needed to be outsourced to animators in India following a Ferndale street shoot that saw the weather change five times in six hours. 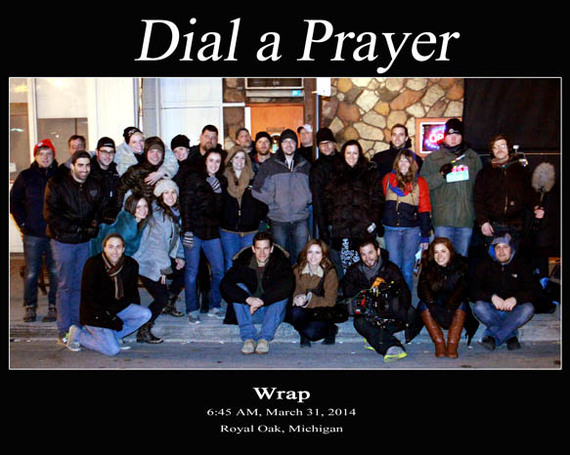 Thank you, Batman. On an indie set, an experienced, smoothly running crew is a godsend. Five miles north of the shoot in March 2014, sat idle the gargantuan Pontiac sound-stages for the 2016 Batman-Superman: Dawn of Justice starring Ben Affleck and directed by Zack Snyder. Production was delayed a few weeks for various reasons on the higher-up level, and suddenly some of the state's best lighting, sound and art department crew members were available for a four-week shoot.

"You take work when you can get it in Michigan, especially with the cuts to the state's film incentive," one grip told me.

Bring 'em by for pizza! On the set at West Bloomfield's Roosevelt Elementary School during a volleyball scene shoot, Bryan Binder walked toward me carrying a wheel. "Jason wondered if you might be able to fix this." It turned out to be a large caster for the camera-cart, one generally only found on camera-carts in L.A. shops. But after three failed hardware store shops, I stopped in National Ladder and Scaffolding in Madison Heights. "I think we've got one of those out back somewhere." They emerged with a dusty wheel that was the perfect match. When they found out it was a Brittany Snow movie, they added, "Hey, we'll be happy to pick up lunch for the crew!" 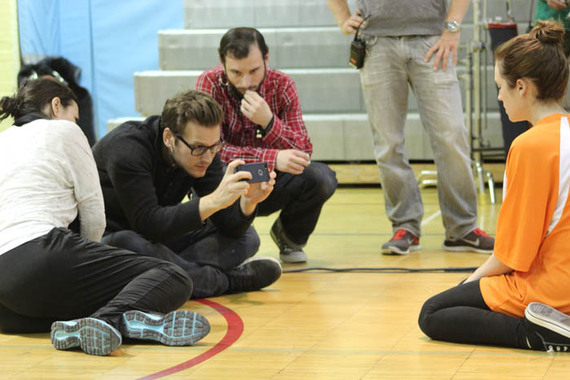 "I absolutely love this crew," a veteran casting agent told me, "I'm so glad things are working out for them; they deserve it. There's just a great vibe about everyone on the set."

Dial a Prayer is the third collaboration between Potash and Kiley, beginning with the short Some Boys Don't Leave with Jesse Eisenberg which resulted in Kiley's Student Visionary Award at the 2010 Tribeca Film Festival. Brightest Star, a feature based on the short was released in 2014 starring Chris Lowell, Jessica Szohr, Rose McIver and Allison Janney.

Dial a Prayer opened in select theatres nationwide on April 10, 2015.