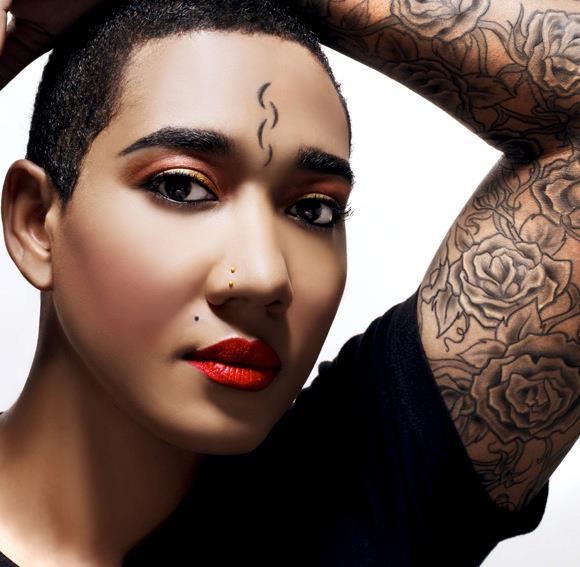 Diana King, the Jamaican born " reggae-fusion" singer-songwriter, revealed that she was a lesbian in a lengthy Facebook post last June. Today, she chats about what motivated her very personal admission and the results of her announcement.

When did you first know you were different?

I really always knew. The attitudes towards gays in Jamaica has been very negative. I am forty and remember there being violence that I saw first hand. I saw how people were treated. I have nine sisters and one that I was very close with. When I was very young we would hold hands when we walked and skipped together, but as I got older people got angry about it because we don't look related.

When I was eight-years-old, my best friend would come pick me up on her bicycle and I would ride around town on the handlebars. She literally looked like a guy. She was like a sister. A "sister-friend. One day, I couldn't find her and I asked around. People dropped their heads and mumbled that they didn't know. I found out she had been badly beaten and repeatedly gang raped. She nearly died. Seeing these things growing up. That stayed with me for a very long time. That was just one example of many I remember. I saw this sort of thing and didn't want to have any association with "those people" and why they were victimized. At that point I closed off a part of myself.

You wanted to be "normal"?

I tried to be. I got married when I was 24 and.. we tried. [laughs] when we were together, I started to get frustrated. I couldn't do it. Even if I wasn't going to be "out", I still wasn't going to be "pretending" to be straight anymore. So for year I lived like that and had no urge to come out. I decided I would be single or it was none of anyone's business. So I got a divorce and focused on my career, but after a certain point I felt like that wasn't enough. He is the father of my son and we are actually very good friends. He is understanding and supportive. I will always love him in a way. We have that connection... but it's not the same sort of love that I need or feel with another woman. He's married and we all get along well. It's very cool actually.

What motivated you to make your coming out announcement via Facebook?

I can sometimes be an introvert and so I spend a lot of time on Facebook and Twitter and these platforms really allow me to connect with people who appreciate my music. In other parts of my life I have always been a really straight forward person, and the time just seemed right. There were a few particular things though. I had been in a relationship for 7 years. You would think I would have been excited, but I just became more private trying to hide. It was very unlike me. I was in love and I didn't want anyone to know. What really pushed me was my 16 year old son. He is very special to me. We sat down to talk one day and he made it very clear that he was aware and that he didn't mind. He told me about how happy he was that one of his teachers went to New York and got married to her partner when it became legal there. He toWhat about your loverthere.

You were in a relationship with a woman at the time?

I got really angry when I thought about it. We came to the United States together. She went to college and when she graduated she had to return to Jamaica. If we were a man and woman we could get married, but we are not. She had to leave after we had spent 7 years together. It was very frustrating. In other aspects of my I've always been totally honest. Hiding these feelings felt so unlike me. That relationship and my son were the two things I was thinking about when I sat down at the computer that day. I had to say it for myself

I felt like I wasn't being real. I want to be real in all that I do. To be true. The words that I speak the way that I live. I'm not sure if that has to do with age or what. I didn't recognize the person I had become and needed to feel authentic.

Was your family supportive?

We're estranged. Like I said. I always I knew I was different. Over time I took myself away from them. Not just because of my sexuality, but I have spent years distancing myself from them. The very few family members I stayed in contact with over the years, have avoided contact with me since I have come out. of the closet

How would you describe the reaction?

It wasn't quite what I had expected. More than ninety-nine percent of the comments are very positive. The other percent... were not. It's changing. I may be the first really open artist, but I know so many people are happy for me. The attitudes are changing over time. The thing that I would like to see happen first is to have a law lifted that criminalizes homosexual activity among men. They can be imprisoned for ten years. Our Prime Minister has said that she would put an end to it, but so far we're still waiting for that to happen.

Time magazine called Jamaica "the most homophobic place on earth" due to a number of its' policies and violence that had occurred.

I've traveled everywhere and I've never seen anywhere like Jamaica when it comes to homophobia. It's sad but we don't talk about it. The little backlash I received in coming out wasn't about my sexuality personally. People were upset that I have been honest about the culture of homophobia in that country. It is homophobic and denying it or ignoring the incidents don't make them untrue. I couldn't live with that anymore. The kind of violence that goes on there, that people have gotten away with there would never exist without acknowledgement or recognition here today in the United States. I don't feel comfortable when I go to Jamaica. When I am there it can take me weeks to drop my shoulders and relax. It's a love hate thing. I was born there and I love the views and the smells and the hillside.. but there is this one thing. This fear. I'm not going to be fearful of who I am, or being who I am anymore.

You must be very excited about Dinah Shore... Have you ever been?

No! I'm sooo excited! [laughs] It's my first time at this event, or any event like this. I can't wait! From a career point of view it's the only change I've experienced since I've come out. Suddenly I'm getting calls to do different types of shows like Dinah Shore.. where I can feel totally accepted. It's a great feeling. Pride events are also new to me. Before I would watch and wonder what they are like to experience. I thought about how fun it must be to go there, and now I get to perform at them. I'm going to be at the largest lesbian celebration in the world! It's such a good feeling. I'm very,very happy about it.

Diana King will be performing at 23nd annual Club Skirts Dinah Shore Weekend in Palm Springs, California taking place April 3rd through the 7th. Ticketing information and up to date schedules are available online at The Dinah.