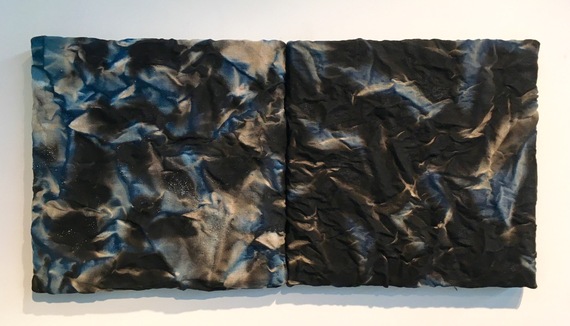 Painter, sculptor, and installation artist Diane Nebolon Silver takes divergent paths toward her singular destinations. Drawing inspiration from the oppositionally intermingled realms of religious sacrament, mid-century abstraction, petroglyphic cave paintings, and the reductive 1-0 fundamentals of computational binary code, she traces a materially profound, palimpsestic route through art history, faith, nature, and science. The conceptually site-responsive wit of her sculptural works and the meditative gravitas of her mixed media paintings and other wall-works employ diverse aesthetic strategies. But all arrive at a liminal place where the underlying structure of human communication, the DNA of language and ritualized information, is deconstructed and repurposed toward an avant-garde proto-Modernist perspective.

At once atavistic and futuristic, Silver's darkly lyrical paintings seem nearly minimalist, but attention reveals multilayered depths of earthy black, white, silver, and brown generating variegated, dense geological textures. The work's ostensible simplicity contains intuitively choreographed information and rich detail built from marble dust, wax, graphite, pigment, occasional textiles and other found materials, and the persistent occurrence of written binary code. Her use of the "language" of 1s and 0s is meant to question the nature of perceived reality, to expose it as a construction not unlike a computer program, using visual art to blur the boundaries of imagination and artifice and create a bridge between the human and virtual realms. 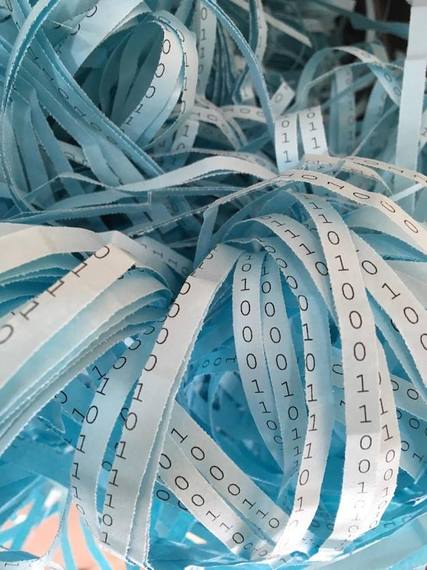 Her newest project is Torrent Streamhttps://www.facebook.com/events/1618902525106581, a site-specific sculptural installation opening in August at Beyond Baroque in Venice Beach, as part of an exhibition about the complex cultural and environmental history of water in the LA region. Silver will also show monoprints and small works, but the anchor of the exhibition is the monumental Torrent Stream an engineered abundance of shredded blue paper imprinted with the binary code that spells the word water, cascading from a wall-mounted pipe and down the massive stairs into the vestibule. As with previous installations and nearly all her 2-dimensional works, Torrent Stream takes the binary world as a "point of departure to explore our strained relationship with water, manifestly apparent in LA," and in special reference to the nearby Venice canals and other centuries-old environmental manipulations, "creating an aqueous landscape...completely dependent on man-made materials."

As a purely formal matter, Silver's studio paintings are undeniably conceived in the spirit of minimalist 20th-century abstractionists like Kasmir Malevich, Anselm Kiefer, Cy Twombly, and Ad Reinhardt -- a notably all-male list of artists who made various attempts to reduce the phenomenological world to its bare fundamentals. But Silver's work is neither homage nor appropriation, existing in the fresh context of both her biography as a 21st-century woman and the content of her personal narrative of interests in matters scientific and spiritual -- as well as her unique taste in materials. How an idiom's enduring concepts are explored, when, by whom, and for what reason can mark a new moment in art history. Silver's attraction to the practice of abstraction in this way is in fact is necessary to the project, a salient aspect of which involves reconfiguring borrowed languages into a new vocabulary. Not only art historical language, but also the devotional, and particularly her use of binary code as both form and content.

The use of religious terms such as "penance" or "sacrament" is not a direct reference to religion but -- as with coding -- a borrowing of familiar terms to accomplish a brave new message. That said, Silver is keenly interested in ritual as both a public and private action, and in the secular insights contained in religious language, in the power of repetition as an active energy that reorganizes the mind, and the recitation of mathematics like fractal mantras. She has a habit of taking apart nearly every piece that comes back to her studio, to be reused or reworked in some immediate or eventual way, so that nothing is ever truly lost or forgotten. In this way as well as in others, Silver not only describes and depicts but also performs, enacts, a personal ritual with every gesture. 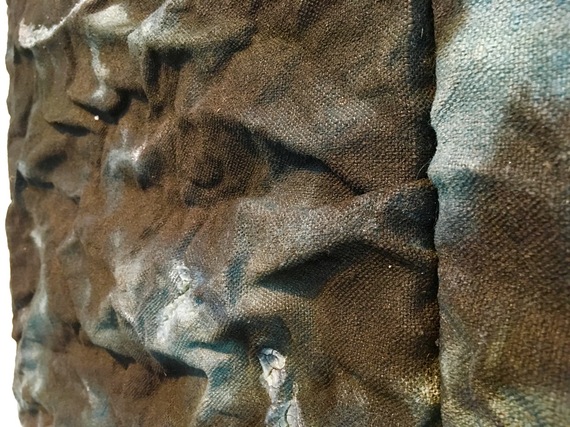 Her studio now is active with a new body of such works currently in progress. Rededicated to ebonies and metal leaf, this series is based loosely on the Biblical Stations of the Cross, both in terms of numerology and its extensive use of wrapping, shrouding, and veiling as constructions and motifs. Employing her unconventional mixed media painting techniques, she adds printing, layered fabric, texture, collage and stitching, and silver. The paintings are about describing an imaginary world using the stuff of this one, with results that come whisper-close to geology and cartography, before retreating behind the veil of abstraction. In both the literal and allegorical sense, this work is about what lies beneath the surface. They are visceral dreams, fictions that express a truth about how the world -- and its meaning -- are made.