During a rather fortuitous live shot on Wednesday, ABC News reporter Cecilia Vega actually saw gas prices jump during a report on the same subject.

As Vega introduced her piece on gas prices for "World News With Diane Sawyer," she stood before a Los Angeles gas station that showed regular gas' cost at $4.99 per gallon. Before the package started, the regular gas price was oddly flashing.

During the two minute video package, which can be watched above, the gas prices actually jumped 10 cents. When the report finished, Vega returned on screen stunned by the coincidental moment. "It is almost too unbelievable to believe,” Vega said as she stared at the now $5.09 cost for regular gas.

“It went up 10 cents?” an astonished Diane Sawyer asked from the studio. “Ten cents during that two minutes while we were on the air,” confirmed Vega.

An ABC News representative confirmed on Thursday that the price of regular gas at the station was still at $5.09 per gallon. 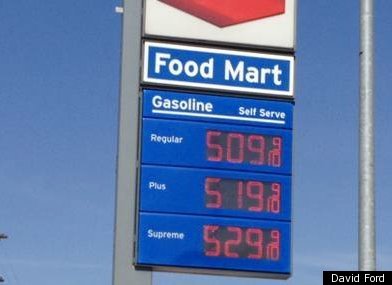