One day last week, I spent six hours at Berlin's famed museum, Gemäldegalerie, most of which involved looking at religious art, lots of heavy duty Catholic imagery, since the Gemäldegalerie covers painting from 1300 to 1800. I never thought I'd say I was sick of seeing Jesus' lean swimmer's body and rock star hair, or his coven of hot apostles at times representing locals who commissioned the art, but pretty much I am done wallowing in that Biblical sausage fest for a while. Luckily there were two Bosch paintings, a couple portraits of Mary Magdalene (my heroine!), plus skulls, demons and a pair of panels explicating "the adventures of young Tobais" to balance out ugly chubby baby Jesus with his mom, and portraits of the man who would be king of this world and the next in various stages of undress and distress.

Diane Silver's "Sacrament" at Coagula Curatorial through October 4, 2015 offers a completely different experience of religion, exploring the Seven Sacraments of Catholicism through abstract art. So perfect. No matter how concrete a theology, no matter how many tomes are written or people tortured and killed over their beliefs (or lack thereof), in the end religion and faith are abstractions that cannot not be codified into one singular meaning.

Using a limited palate with plaster, bone, wax, ink and hemp, Silver moves herself and the viewer through the Seven Sacraments in a meditative series of large scale canvases. The choice materials is evocative: These are ancient media to indicate faith, and ancient media used in art. Bones especially call up the concepts of the body, of sacrifice, of what we all return to at death, the skeletons arising on judgement day, the skull of Calvary, the calaveras of Mexican folk art, the ancient bones used to make a pigment called mummy brown. 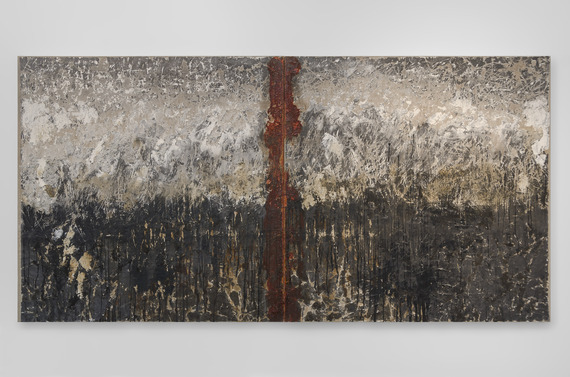 For the Catholic faithful, baptism begins at birth, and Silver's interpretation, Baptism, is of birth: a vertical line, a gash really, smeared and reddish, bifurcates the canvas, rending the Veil, and contrasting with next sacrament, Communion, in which a blood red squiggle, perhaps the Holy Spirit, perhaps self-awareness, sperm-like enters a circle. This is the blood (wine) and body (communion wafer) of Christ, this is communion with the Divine.

The shape of the squiggle recalls the Hebrew letter yod, the first letter of the ineffable name of God, representing the element of fire. In A. E. Waite's tarot, illustrated by Pamela Colman-Smith, the yod is shown as the Pentacostal fire, the tongues of flames from heaven that illuminate the mind, providing gnosis; yod is also assigned to the Hermit card in the tarot deck. In Magick in Theory and Practice, Aleister Crowley writes:

"Yod" is the creative energy -- the procreative power: and yet "Yod" is the solitude and silence of the hermitage into which the Magician has shut himself.

As well, yod means hand, and Crowley equates the Hermit card with Fertility in its most exalted sense, ascribing to the Hermit card a specific solitary act, the hand doing the work of the mind, writing that his version of the card, painted by Lady Frieda Harris shows

... the entire mystery of Life in its most secret workings. Yod Phallus Spermatozoon Hand Logos Virgin. There is perfect Identity, not merely Equivalence, of the Extremes, the Manifestation, and the Method. 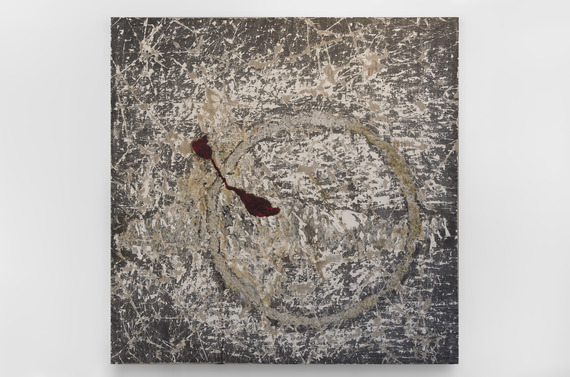 Following Communion is Confession, because certain acts that give us gnosis and union with the Divine -- whether solitary or with another -- are considered sins by the Catholic Church. In Confession, woven hemp replicates the confessional screen, and a small square piece of mirror reflects the viewer, for though we confess to the priest who is Christ's emissary on Earth, in fact we are each God, and it is ourselves we must confront, to whom we must confess, and who we must forgive.

In Confirmation, the circle reappears on a darker background, the union is complete, and leads to Holy Orders which in Catholicism means carrying on apostolic ministry. According to the Catholic Catechism,

the faithful exercise their baptismal priesthood through their participation, each according to his own vocation, in Christ's mission as priest, prophet, and king. Through the sacraments of Baptism and Confirmation the faithful are 'consecrated to be . . . a holy priesthood.'

Thus each of us carries within us the ability to bring others to the awareness of our own Godhood and their own as well.

Matrimony is the next "Sacrament," and in this painting, the artist references the famous graphic, Goblet Illusion, ("Do you see two faces or goblet?") as well as the Ace of Cups and Two of Cups in the Rider Waite tarot. A pale brown shape recalling a "loving cup" is set on a white background, loosely forming faces in profile, through which glow binary codes -- the line of the sperm, the zero a receptive circle. Unlike the optical illusion, the two faces are not mirror images; in the same way, we never find our exact opposite as a mate, there are similarities and differences. And even in union with our Self, we do not find a mirror a image but new visions of who we are as we develop self-knowledge.

In "All Apologies," Kurt Cobain sang

and in "Sacrament," Matrimony is followed by Extreme Unction, last rites, given at death. Silver's Extreme Unction completes her cycle, the vertical gash of Baptism has become a equal-armed cross slashed into the canvas, the binary codes emerging boldly from the gray, white and beige background. Do you see the face, or perhaps faces, of God? Does it matter?

Whether one is religious, atheist or agnostic, Sacraments creates a meditative perspective on the Self and illuminates the artist's relationship with the Divine, while allowing us the space to contemplate the stages of life and self-realization, whether we choose to believe in esoteric, metaphysical concepts or not. 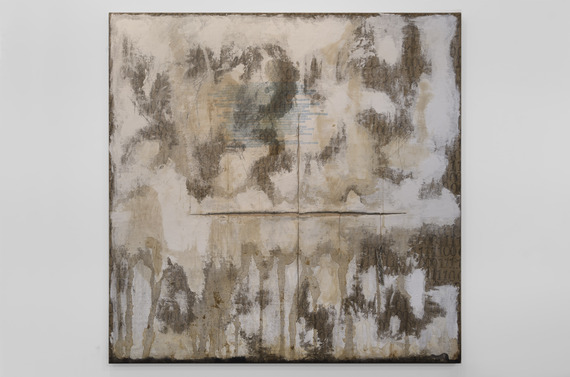