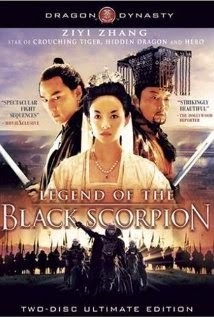 Know any Hamlet clones wandering around Chinatown (Feng Xiaogang's The Legend of the Black Scorpion, originally released in China as The Banquet, finds its roots in the Shakespeare play)? Wanton egg drop is the soup that's tailored made for them. The question remains is the fusion of two proud specimens of Chinese American cuisine beneficial to one's health and well-being? Or is it a form of enabling? Will such institutionalized waffling become a metaphor for the dangers of equivocation and set the style not only for culinary taste, but for life choices in general? Sure it's easier not to make a choice. Let's say I go to a diner and am tempted by the turkey meatloaf special but also have a hankering for the fried chicken basket? Do I order the turkey meatloaf fried chicken basket? Do I go for matzo ball pea when I can't choose between matzo ball and pea soup. On a macro scale you see this in the profusion of Chinese and Japanese restaurants whose so-called fusion cuisine is really an attempt to play both ends against the middle, resulting in a cuisine that is neither fish nor fowl. Fressers who grow up slurping mixed wanton egg drop and eating in Chinese Japanese restaurants are likely to turn into lawyer/ accountants, architect/ builders, editor/ writers or coach/athletes. While there are virtues to playing both sides of the fence in work as well as love (ie being AC/DC), the danger is always of a watering down the original intention. Whether it be in soup or lovemaking there's a point where you don't taste anything any more. In one sense mixed wanton egg drop is a product of our modern internet culture in which the amount of choices available through Google and other search engines makes it impossible to make decisions. But most everyone will agree, the last thing you want is Italian ISIS.