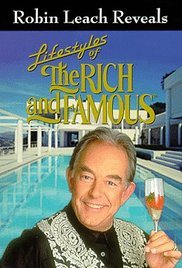 Remember Robin Leach's Lifestyles of the Rich and Famous it was one of those timeless programs like Deney Terrio's Dance Fever or Soul Train that could some day be the destination for a voyager traveling to alternate universes. The language was perpetually filled with superlatives that were the substance of invidious comparisons to one's own workaday existence. Some exotic location was always "the scene of another elegant affair" and you'd laugh as you'd tag it to your one room studio in the walkup off of Third Avenue. "l9th Street was the scene of another elegant affair. No expense was spared." And you could go on to describe the after party which took place in front of the refrigerator where chunks of Jarlsberg were carved from an aging (usually stale) wedge and laid across Saltine crackers--all this as a CNN Breaking News story related the details of the latest terrorist attack or Tsunami played on one of those over the hill monitors, where all the images are unintentionally pixelated. Toying with such memories can get you giddy and lightheaded and cause strange collocations of words to cross your internal computer screen, like say "gang bang at Dunster House." Dunster House is, of course, a well-known Harvard residence, and in this age of "affirmative consent," it's all the more unlikely that it would be the setting for an Animal House. However, isn't that what surrealist daydreams like Un Chien Andalou are all about?