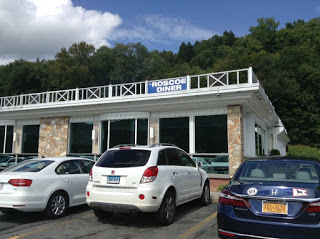 The Roscoe Diner is a modern day oasis. It's flagstone exterior facing the local Mobil station in the town after which it's named (the exit is actually Roscoe/Lew Beach) is a cynosure to travelers taking scenic Route 17 through the Catskills. Livingston Manor, which boasts The Catskill Fly Fishing Center and Museum is only a few miles down the road. Part of what makes The Roscoe Diner so special is not the menu, which is fairly typical for diners, everywhere, containing as it does a list of offerings that reads like the roster of the UN. Rather it derives its power from the void which surrounds it. Diners of this sort with cozy leather booths are a dime a dozen in Queens, and there's definitely a main drag in Roscoe which boast more ambitious fare aimed at the affluent angling crowd. But here you have a touch of the urban desert in the middle of what's essentially an enormous nature preserve. Entering the diner, you have your choice of dusty rose or magenta booths with Plexiglas partitions that make them into little cubicles through which you can regard the other patrons like exhibits of prehistoric life at the Museum of Natural History. There are college pendants hanging across the walls from Union, The University of Scranton, Syracuse, Potsdam and Oswego amongst others and if you're in a rush you can sit at the counter with its leather upholstered swinging stools which are almost posh. By the way you're old style waitress (not server), who talks out of the side of her mouth, and comes right out of central casting, is likely to give you a little something on the house for which he or she expects to receive their just reward. Sometimes it's nice to go somewhere and feel like you're nowhere or to find something familiar in the middle of nowhere and The Roscoe Diner fulfills both of these ambitions.