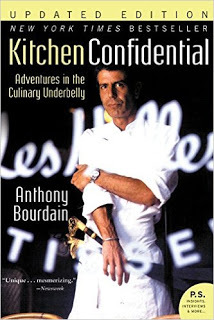 You can't help thinking about how life is lived amidst desperadoes and extremists, outlaws not from the world in which they govern, but from the notion of civilization perpetrated by the Enlightenment in which reason prevails against passion and the notion of inalienable rights leads to legal principles like due process. Charisma by nature always becomes routinized as Max Weber pointed out. A sect becomes a church and even the zeal of the fanatic runs becomes institutionalized. What, for instance, is it like in an ISIS barracks? What kind of food is fed to their recruits and who creates the menus for both the foot soldiers and those in command? Does Abu Bakr al-Baghdadi have his own private chef who presides over a well-equipped kitchen out-fitted with appliances like a Sub Zero refrigerator? Does he host banquets attended by other prominent terrorists like Ayman al-Zawahiri, the current leader al-Qaeda? And which of his wives does he appear with at public occasions? Beyond the exhilaration of beheadings and public relations coups that come in the form of pulling off brazen attacks that only increase the attractiveness of the organization to a base demographic, do members of ISIS experience the joy of cooking? Getting back to the kitchen, does Mr. Baghdadi delight in the smells emanating from his crockpot as much as he does the shrieks from the cells in which prisoners are tortured or raped. ISIS militants in Raqqa get toothaches and diarrhea and there are undoubtedly men suffering from erectile dysfunction and those who are afraid they're dicks will be cut off if they are found spanking the monkey. ISIS is known for its social media savvy, but do their PR types have anything in common with t counterparts in enemy territory? Are there redoubts which cater to those who present the face of ISIS to the world and do these cafes and restaurants, if they exist, have anything in common with similar establishments around the world? Is there a Michael's which caters to publishing big wigs in the Islamic state. The South Korean director Shin Sang-ok was famously kidnapped by Kim Jong-il, who was a film buff? Can we expect that a terrorist like Baghdadi will start to indulge his esthetic appetites if and when ISIS becomes a state rather than simply a state of mind? Will Anthony Bourdain be doing a segment on the culinary delights that await those who make the journey to ISIS's promised land?