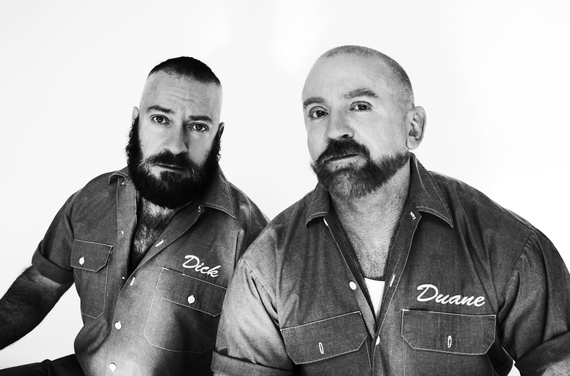 Phillip M. Miner: I like to start out my interviews by asking what it was like for you growing up gay.

Richie Cohen: I felt so lucky to grow up in the '70s. I actually remember saying that to myself as a kid. I loved that album Free to Be... You and Me. It had stories and songs that taught kids to ignore the old-fashioned gender stereotypes. Just do your own thing. Boys can play with dolls. Men can cry. And everything was unisex -- clothes, hairstyles. To a little gay boy, that was the greatest thing, you know, the freedom and the choices we had. Then, in the '80s, everything changed and reverted back to little girls as pink princesses and little crewcut boys playing with war toys.

Duane Tragis: Things changed a lot during the '80s. AIDS had a huge impact on what people thought of the gay community. Like, "If you're gay, you must have a death wish." But in the '70s it was very different. There were a lot of progressive things happening. We were just watching Mary Hartman--

Duane: Yeah. There's a gay couple on the show, and they're talking about marriage rights and federal benefits, and that's in 1976! That show truly mirrored the issues of the time. Then AIDS hit, the conversation changed, and we were all thrown back.

Miner: What was it like for you growing up gay, Duane?

Richie: He would watch wrestling on TV, and his pee-pee would feel funny.

Duane: That's right. I never had problems growing up gay. I was voted Mr. Congeniality in high school because I got along with the jocks, the band nerds, the potheads and the brains. I really didn't get picked on. I wasn't out, but I didn't have girlfriends.

Duane: Yeah, I started going out to discos in Manhattan when I was 15. For me, Studio was all about dancing and being out with celebrities, not sex. There were these two drag queens, Kevin and Arthur, who said, "You have to meet Andy [Warhol], because you look just like him." They took me to the upper level where all the stars were and sat me in his lap. It seemed like everyone was high on who knows what, and I was just thinking, "This is fun!" But that was the first time I saw butch leathermen and clones, which was reaffirming since the only images of gay men I had seen on TV or in movies were not very masculine and not a turn-on for me. 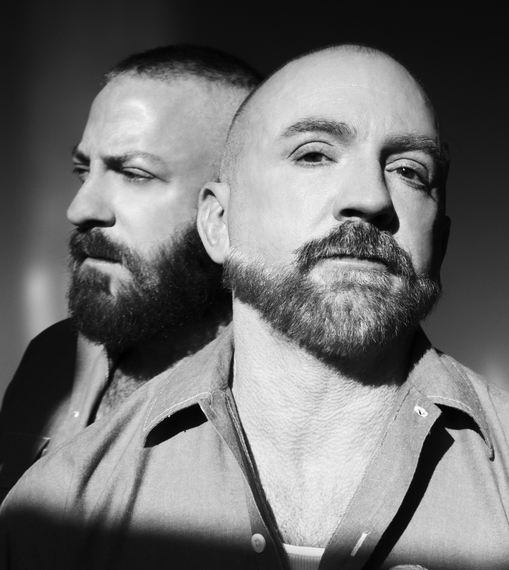 Miner: Are you legally married?

Richie: We got a civil union in Vermont in 2001. We will get married, but not until Section 2 of DOMA is repealed.

Duane: I don't want to be married in New York, then not be married when we cross state lines.

Richie: You know, it's funny how things have changed. We were monogamous in the '80s, exchanged rings and declared ourselves married--

Duane: And our gay friends would say, "You can't do that! Gay men don't get married. That's what straight people do." It seemed like they wanted us to be single and have many partners.

Richie: Or "lovers" was the word back then. It's the exact opposite now. People even say to us, "You really shouldn't have an open relationship, because you're destroying everything we've worked for." I just want to tell them to shut up, because, you know, straight people are all 100-percent monogamous, right?

Duane: Relationships work on all different levels. There's not one way to have a marriage.

Richie: Yes, there is. The way where I'm in charge and you fuck me whenever I tell you to. [Laughter.] But I don't get why people think our being together for so long is such an accomplishment. I mean, I love that we inspire them and they call us role models. But we didn't do anything incredible. The truth is we just get along so well that it's always been easy.

Miner: When did you open up your relationship?

Richie: After I cut my long hair. I grew it out on a whim in the mid '80s and kept it for 10 years. It became my identity and the focal point of my standup. This was back when the steroidal-Chelsea-boy look was "in," and we lived in Chelsea, but I looked like a skinny lesbian. But then I cut the hair off, and almost overnight I started getting attention from guys. Duane had been wanting to open things up for a while because he always got attention. When I got some attention too, it was time.

Duane: That was the late '90s. We discovered AOL chat rooms, and we were like, "Hey, there's all these men online who want to have sex!" We kinda went nuts.

Richie: We were not as well-known back then, so it was more anonymous, which we loved. But now, well, I was fooling around with this guy at IML, and he whispered in my ear from behind, "You guys are so funny. Where's the Ape?" [Laughs.] So much for anonymity! Another time, a guy asked me to sing "Gloria."

Miner: Because that was his kink?!

Richie: [Laughs.] No, Laura Branigan's song "Gloria" is our most popular sketch and the first one we ever wrote together. We'd only been dating a few months. "Gloria" was a huge hit on the radio. One night, while we were making out in the car, we started acting out the lyrics in screechy girl voices and cracked ourselves up.

Duane: It's hard to do now because our voices are too deep.

Miner: That would probably make it funnier! So when did you start performing together?

Richie: In 1987. I remember when we were first dating, we'd stay up all night making each other laugh over really silly stuff. We still do that 32 years later. And we're both hams. So it was just a natural progression that we started doing it on stage. 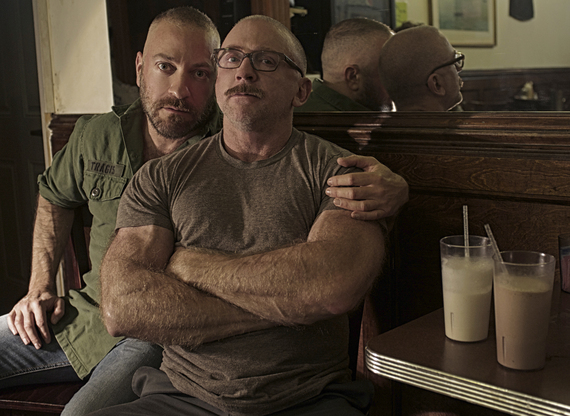 Miner: Do you work out your problems through your comedy?

Duane: Yeah. We had problems early on--

Richie: I was a bit possessive and demanding. I had some growing up to do.

Duane: But we worked it out. Now, everything runs like--

Miner: A well-lubed machine? Let's try this: Does your relationship play into your work?

Richie: Well, we often do sexual stuff when we perform live.

Miner: You're going to need to clarify that. Are we talking sex shows?

Duane: But it was also a reaction to homophobic comedy club bookers who had told us we were too gay for mainstream clubs. It's kind of a big "fuck you" to them.

Miner: So what's next?

Richie: Our Web series! I'm so excited that we finally have a title: I Love the Ape. We wanted to do something funny and different from what's being done in most gay Web series. We did our homework and watched a lot of them. Most take place in New York or L.A. Most are about guys in their twenties. They're almost all single. I haven't seen anything about anyone who's been married for a long time. I don't see "us" out there at all.

Miner: The story right now is "getting married," not "being married."

Richie: Exactly! Our story is about three decades of being married. And it needs to be heard, goddammit! 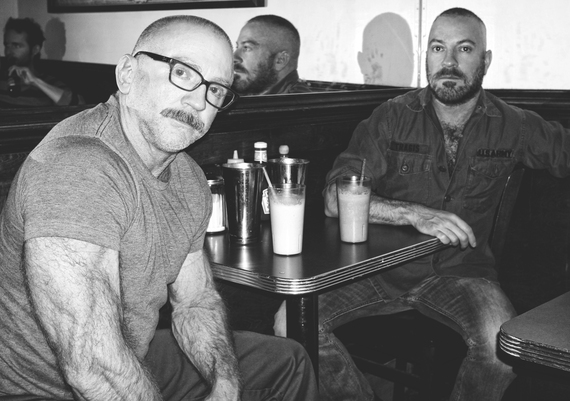 PHOTO GALLERY
32 Years With Dick And Duane (NSFW)
Download
Calling all HuffPost superfans!
Sign up for membership to become a founding member and help shape HuffPost's next chapter
Join HuffPost
Voting Made Easy
Register to vote and apply for an absentee ballot today
Register now 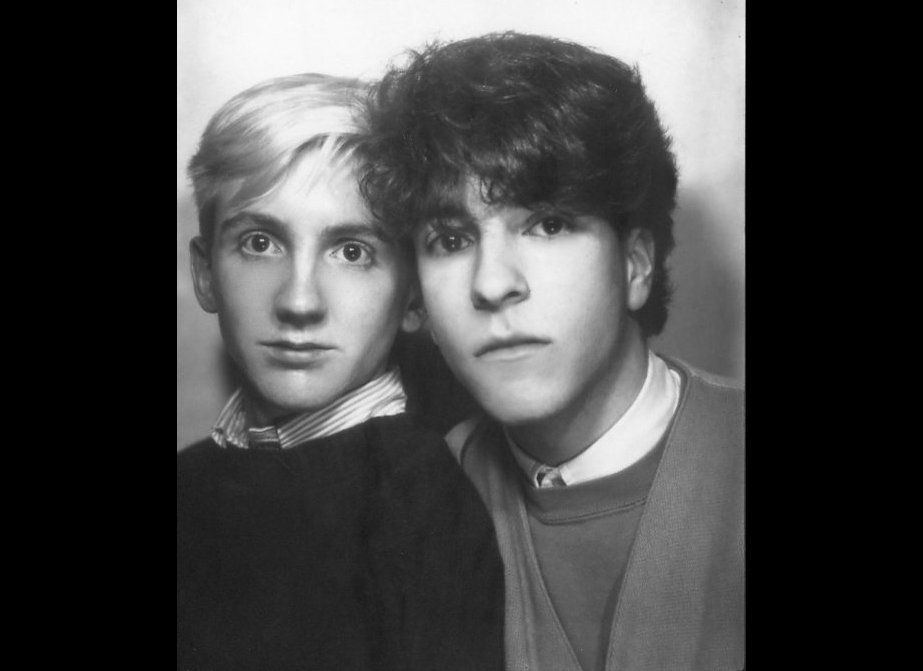