WASHINGTON -- Former Vice President Dick Cheney was "embarrassed" when the U.S. credit rating was downgraded in August, and he hopes that the development will compel lawmakers to continue to work to address the deficit.

"Now, these last few months have been pretty messy," said Cheney. "I think like a lot of people I was embarrassed when they lowered our credit rating from AAA to AA. I literally felt embarrassed for my country."

"But I also think that the fact that we've gotten to this point where we are faced with a crisis in terms of the debt problem, that that's going to give those of us who want to address that issue and fix it the leverage that we haven't had up until now, in terms of insisting on the kinds of policies that will be painful, but in the long run are necessary if we're going to restore full faith and credit in the United States government."

The Bush administration wasn't always so concerned with making "painful" choices to address the deficit. As a recent chart put together by The New York Times showed, Bush-era war spending and tax cuts alone contributed more to "the swing from projected surpluses to deficits" than President Obama's policies, taken out to 2017. 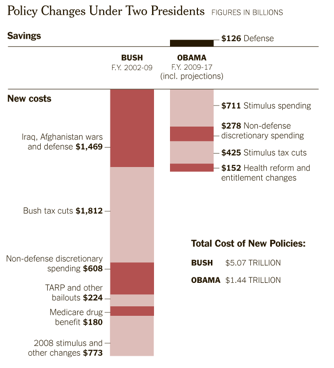 Bush left office with a record budget deficit of more than $400 billion.

Former Bush Treasury Secretary Paul O'Neill wrote in his memoir that in 2003, when the administration was debating whether to move forward with the $550 billion tax cut President Bush was proposing, Cheney said, "You know, Paul, Reagan proved that deficits don't matter. We won the mid-term elections, this is our due."

In his new memoir "In My Time," Cheney argued that that quote was misinterpreted.

"[O]f course I thought deficits mattered," he wrote. "I just believed that it was important to see them in context, to note that while Ronald Reagan's dramatic increases in the defense budget and his historic tax cuts did push the deficit from 2.7 percent of the gross domestic product in fiscal year 1980 to 6 percent in fiscal year 1983, his spending on defense helped put the Soviet Union out of business, and his tax cuts helped spur on the longest sustained waves of prosperity in our history."