A vast majority of liberals have a hard time naming anything remotely positive when it comes to former Vice President Dick Cheney. I mean, lying us into an illegal war, torture, warrantless spying on Americans, the list goes on and on.

Now we could say "He's no longer in office." That's certainly a positive. Or the fact that his insistence on remaining in the spotlight is hurting the GOP's future electoral chances. That's a positive, too. But the truth is, Cheney has recently been doing something that's very positive and very American. He's passing on the keys to the family business. Take a look.

It's touching, isn't it? I mean here we have a man who's teaching his daughter the tricks of the family trade. Granted, his family trade is lying, but it's still sweet to see a father and daughter bonding over their attempts to rewrite history. And if you're going to learn to lie, there's no more a master craftsman than our former Vice President.

Now apparently Monday was Take Your Daughter To Work Day, because on Fox News, Dick and Liz gave an adorable joint interview to Greta Van Susteren where Dick said:

Well, I would -- you know, I'm, of course, a proud father, but I'd love to see her run for office some day. I think she's got a lot to offer. And it's been a great career for me. And if she has the interest, and I think she does, then I would like to see her to embark upon a career in politics.

It's great when a parent believes in their child. And clearly Dick has an eye for talent. Who can forget that when George W. Bush had Dick comb through Vice Presidential candidates to find the best pick and Dick suggested... himself?

Let's face it, if Liz chooses to follow in her dad's footsteps, she will have some pretty big and pretty evil shoes to fill. That's why it's important for Dick to ease her in. Keep her from being too evil, too soon.

But conservatives love her and she's off to a great start. Lying about torture? Check. Saying Obama finds it "fashionable" to "side with the terrorists"? Double check. Hell, I say all that's left is to get her a token job with Halliburton, give her the keys to the dungeon and let her rip because clearly this rotten apple doesn't fall far from the tree. 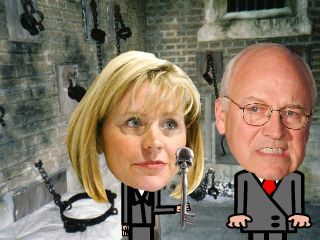 UPDATE: In response to President Obama's speech in Cairo, Liz says that Obama wants to hold hands with terrorists. Insane rhetoric like that must warm her father's robotic heart.