With most of the percent of the precincts reporting, state Treasurer Richard Mourdock had 61 percent of the vote to Lugar's 39 percent, sending Mourdock to a November matchup against Democratic Rep. Joe Donnelly.

A year ago, few people gave Mourdock much chance against Lugar, an Indiana icon regarded as one of the U.S. Senate's leading statesmen on international affairs.

But Mourdock managed to cast Lugar as out of touch with the state that elected him 36 years ago, convincing not just tea partiers -– who supported Mourdock overwhelmingly -– but also many other Republicans that Lugar was too close to the Democrats.

Mourdock praised his beaten foe in his victory speech, but laid out a vision for the rest of the campaign and for governing that was at odds with Lugar's history of working across the aisle.

"Hoosier Republicans want to see the Republicans inside the United States Senate take a more conservative tack, and we're looking forward to helping do that," Mourdock told cheering supporters.

And while Lugar advised in his concession speech not long before that Mourdock would need to work together with lawmakers in the Senate, the new nominee stuck to the belligerent tone he maintained in the campaign, warning that Democrats and socialists were destroying the nation.

"Today we see the Obama White House and we see a Senate chaired by Harry Reid that's doing everything it can -- though perhaps not intentionally -- to turn our dreams, to turn our great national hope and our dream into the nightmare of ever-growing government, to make us that … western European-style nation," Mourdock said.

"Just yesterday, France elected a socialist," he continued. "There are those I'm sure in the administration and in the left side of the Democratic Party that were cheering for that. But we're not going to stand for that in Indiana because the supporters of Barack Obama are not going to win!"

Mourdock's heated rhetoric offered a sharp contrast to a low-key concession by Lugar, who refused to retreat from the idea of working with the other side, implicitly criticizing his rival.

"Serving the people of Indiana in the United States Senate has been the greatest honor of my public life. Hoosiers deserve the best representation possible," an emotional Lugar said. "They deserve legislators who will listen to their entire spectrum of citizen views and work to achieve consensus. They deserve legislators who each day go to work thinking about how they can solve problems."

Lugar seemed acutely aware that the right wing of his party had turned its no-surrender approach on him.

"We are experiencing deep political divisions in our society right now, and these divisions have stalemated progress in critical areas," Lugar said, using a line that Democrats are likely to repeat going into the fall. "But these divisions are not insurmountable and I believe that people of goodwill, regardless of party, can work together for the benefit of our country."

While Lugar was gracious in his speech, he released a statement that was far sharper:

If Mr. Mourdock is elected, I want him to be a good senator. But that will require him to revise his stated goal of bringing more partisanship to Washington. He and I share many positions, but his embrace of an unrelenting partisan mindset is irreconcilable with my philosophy of governance and my experience of what brings results for Hoosiers in the Senate. In effect, what he has promised in this campaign is reflexive votes for a rejectionist orthodoxy and rigid opposition to the actions and proposals of the other party. His answer to the inevitable roadblocks he will encounter in Congress is merely to campaign for more Republicans who embrace the same partisan outlook. He has pledged his support to groups whose prime mission is to cleanse the Republican party of those who stray from orthodoxy as they see it.

While Mourdock won, even observers in the Republican party thought Lugar was largely to blame for not being more aggressive.

"It says you had better play offense, and not defense. That's what it says," Sen. John McCain (R-Ariz.) said on Capitol Hill earlier Tuesday when asked about Lugar's predicament.

Perhaps Lugar's most glaring failure on that front was in dealing with his residency. He moved to Virginia after he got elected 36 years ago -- as permitted under Indiana law -- but Mourdock and Mourdock supporters hammered Lugar repeatedly on the issue, filing complaints against his voter registration at an address he no longer used and challenging his right to be on the ballot.

Lugar briefly was ruled ineligible to vote and had to re-register with the farm his family owns as an address, but the drumbeat of stories effectively cast him as a creature of Washington. Indeed, Lugar had to stay in hotels to visit his home state, and sometimes improperly billed the U.S. government for it.

"ABCs of politics: stay involved, communicate with your constituents and be prepared to embrace a 21st century campaign," said Sen. Lindsey Graham (R-S.C.). "And own a house."

Most Republicans, including Indiana's junior senator, Dan Coats, declined to talk about the race, saying they'd wait until Wednesday after the contest was decided.

Mourdock counted heavily on Tea Party support, with a recent poll finding that the 28 percent of Indiana GOP voters who identified with the movement favored the treasurer by more than a 40-point margin. Coupled with relatively low turnout, Tea Party enthusiasm appeared to be enough. Groups like the Club for Growth, the Tea Party Express, FreedomWorks and the National Rifle Association spent heavily and worked hard for Mourdock.

But Democrats saw Mourdock's surge as evidence that the GOP is beholden to the Tea Party and others who -- like Mourdock -- insist that compromise and bipartisanship are dirty words. And they think that gives them a chance to steal a seat from the GOP.

"The Republicans could be on the verge of selecting a far-right Tea Party candidate who will be running on a promise that if he is sent to Washington he will refuse to compromise on anything," said Sen. Chuck Schumer (D-N.Y.) "He wants to beat Sen. Lugar for Lugar's ability to compromise. He says there's a problem, Mourdock does, of too much bipartisanship, and he can be counted on to obstruct. Well, there are a lot of things wrong in Washington, but too much compromise is certainly not one of them.

"It's only going to give Democrats another pickup opportunity," Schumer said. "The more the Republicans embrace the Tea Party agenda and its candidates, the more they damage their chances in November."

A spokesman for the National Republican Senatorial Committee, Brian Walsh, noted that Democrats had been excited before about winning in GOP-leaning Indiana as recently as 2010, when Brad Ellsworth was touted as a conservative who could top Coats, who instead won convincingly.

"Sen. Schumer has never been one to let reality get in the way of hyperbolic political spin," Walsh said. "But considering he's the same Democrat who predicted two years ago that anyone who opposed ObamaCare would regret it on Election Day, let's hope Democrats aren't putting money on his predictions these days."

Mourdock campaign spokesman Christopher Conner said in a statement late Tuesday, "Senate Democrats can try to deflect attention away from their candidate Congressman Joe Donnelly all they want, but truth is hard to ignore regarding Congressman Donnelly's support of Obama's liberal agenda: Congressional bailouts, the failed stimulus package, and the jobs killing legislation of ObamaCare."

"Hoosiers reject these sorts of big government spending and will reject Joe Donnelly in the fall as well," Conner said.

Some of Lugar's friends in the Senate noted that he at least put up a brave face, even as polls showed Mourdock gaining momentum.

"I was at an event for him last week or week before last at the NRSC and he's very upbeat, you know, his team has been working hard," Sen. Bob Corker (R-Tenn.) told reporters before the results came in. "I know the poll numbers don't reflect good things going into the race, at all. But you know, he's been very upbeat. The whole time." 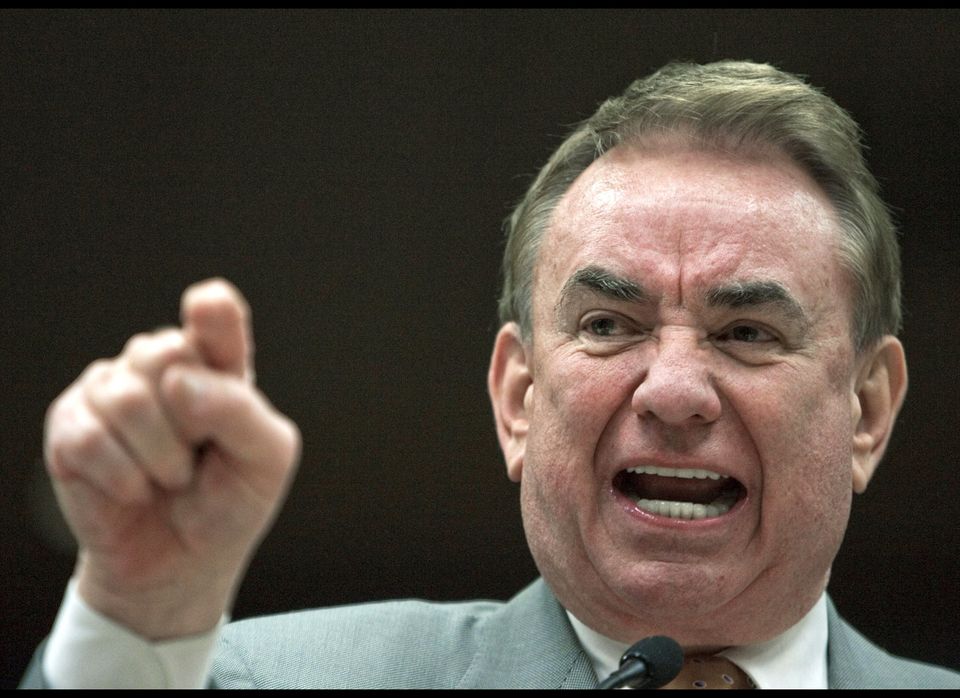