What do you do when you have annoyed J.P. Morgan, the most powerful man on Wall Street? This question was very much on the mind of Nikola Tesla in January 1902.

An electrical inventor, Tesla had been born in 1856 to a Serbian family living in what is today Croatia. In 1884 Tesla had emigrated to America to work for Thomas Edison, but he soon quit in order to pursue his dream of an alternating current motor. After selling this invention to George Westinghouse, Tesla had gone on in the 1890s to be one of the first to study radio waves, prompting him to perform demonstrations where he took shocks of 250,000 volts as well as to create 100-foot lightning bolts while working in Colorado Springs in 1899. While in Colorado, Tesla convinced himself that it would be possible to send power around the world without using wires. 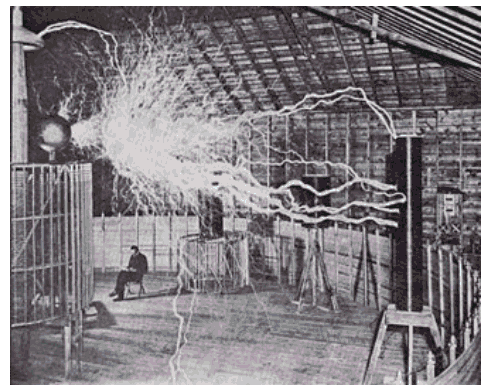 Tesla in his experimental station in Colorado Springs, December 1899. He is seated in his magnifying transmitter (known today as a giant Tesla coil), with an electrical discharge passing from the secondary coil to another coil. This picture was a double exposure on a single glass plate; Tesla was first photographed sitting in the chair and then the magnifying transmitter was turned on.

The challenge facing Tesla in 1902 was that, although Morgan had given him $150,000 to build a laboratory at Wardenclyffe, Long Island in order to send power and messages across the Atlantic, Guglielmo Marconi had beaten him to the punch. In December 1901, Marconi announced that the Morse code signal for the letter "S" had been transmitted from England and received in Newfoundland. Marconi, not Tesla, was the new wunderkind of radio.

So what did Tesla tell his patron Morgan?

Along with complaining how Marconi had stolen his circuit designs, Tesla proposed to Morgan in 1902 a plan for a "World Telegraphy System" in which a number of transmitting stations would collect news and broadcast to customers via individual receivers. As Tesla boasted to Morgan:

The fundamental idea underlying this system is to employ a few power plants, preferably located near the large centers of civilization and each capable of transmitting a message to the remotest regions of the globe. These plants . . . as fast as they receive the news, they pour [it] into the ground, through which [it] spreads instantly. The whole earth is like a brain, as it were, and the capacity of this system is infinite, for the energy received on every few square feet of ground is sufficient to operate an instrument, and the number of devices which can be so actuated is. . . . infinite. You see, Mr. Morgan, the revolutionary character of this idea, its civilizing potency, its tremendous money-making power.

Tesla confidentially told Morgan that they would make money by manufacturing receivers, and by far his most imaginative idea for a receiver was a handheld device connected to a short pole or even a lady's parasol so that it could pick up voice messages anywhere in the world. As Tesla promised in 1904, "An inexpensive receiver, not bigger than a watch, will enable him to listen anywhere, on land or sea, to a speech delivered, or music played in some other place, however, distant." Here in the opening years of the 20th century, Tesla conjured up a device much like a transistor radio or cell phone, with the promise of providing instantaneous access to information anytime, anywhere.

So what became of Tesla's vision of a World Telegraphy System? Ever the hard-headed banker, Morgan was not persuaded by visions of information flowing through the earth and he refused to invest further in Tesla's Long Island lab. Tesla struggled for a few more years, only to discover that it was incredibly difficult to "get a grip of the earth" and pump oscillating currents into the earth's crust. Distressed that he could not square physical reality with what he could see so clearly in his mind, Tesla suffered a nervous breakdown in 1905. A broken man, Tesla died in 1943 in a New York City hotel room, penniless and forgotten.

Over the last 20 years, Tesla has enjoyed a comeback in popular culture, celebrated as a Don Quixote-like hero who did battle with business titans like Edison and Morgan. Late last summer, Matt Inman used his online comic, The Oatmeal, to raise $1.4 million by crowd-sourcing so that a private group, the Tesla Science Center, could save Tesla's laboratory on Long Island. 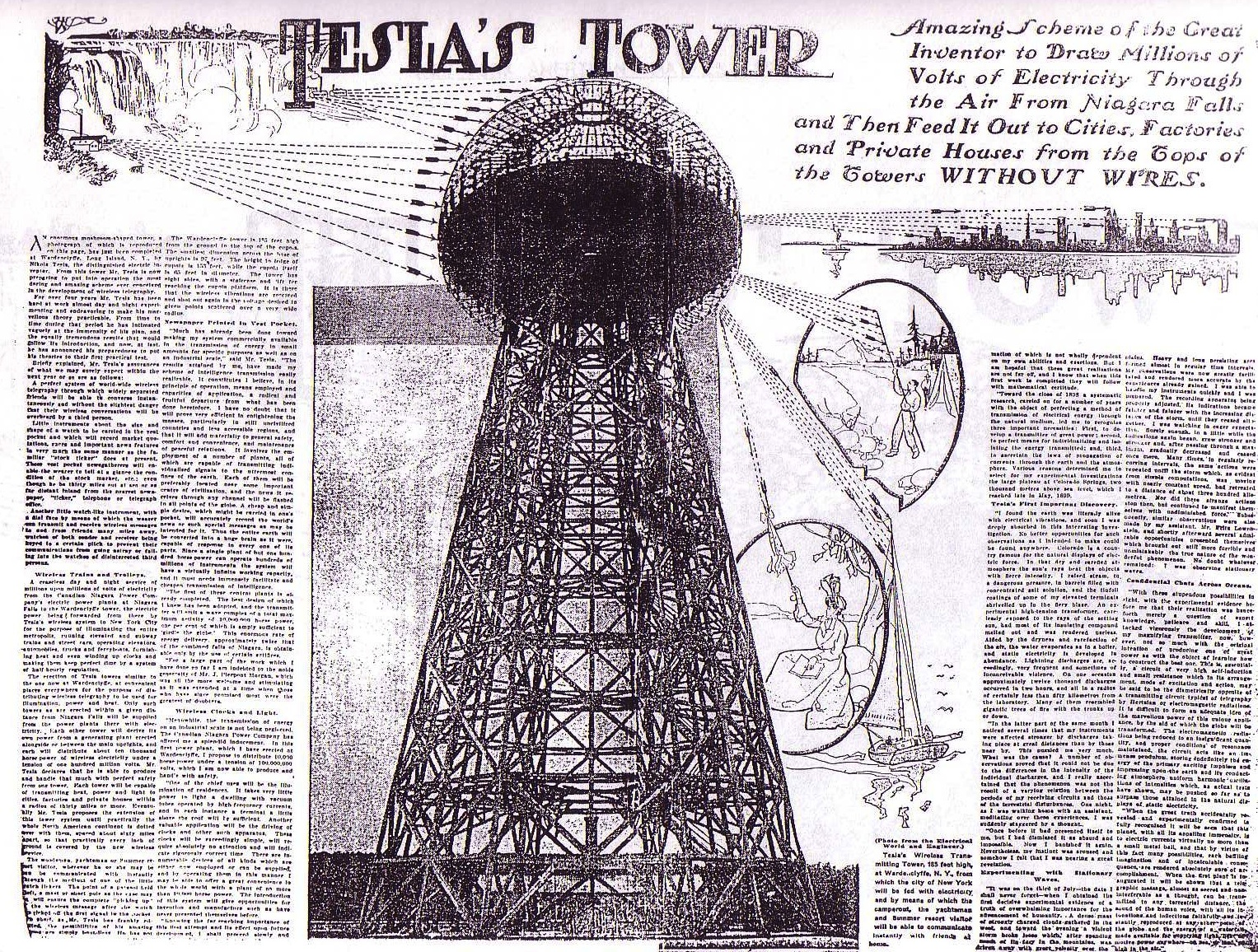 "Tesla's Wireless Transmitting Tower, 185 feet high, at Wardenclyffe, N. Y., from which the city of New York will be fed with electricity, and by means of which the camperout [sic], the yachtsman and summer resort visitor will be able to communicate instantly with friends at home." From "Tesla's Tower," New York American, 22 May 1904 in The Tesla Collection, 23 vols., comp. Iwona Vujovic, (New York: Tesla Project, 1998), 17:11.

More than seeing Tesla as a flighty crank who never finished anything, we should appreciate his early insight about the coming of the Information Age. Although he was certainly not thinking about the computers, software, and packet-switching necessary to create the Web, his fundamental idea that all information should be collected and disseminated around the world is very much what the Internet and World Wide Web has come to be in our time. "I think we all misunderstood Tesla. We thought he was a dreamer and visionary," wrote fellow engineer John Stone Stone in 1915. "He did dream and his dreams came true, he did have visions but they were of a real future, not an imaginary one." Stone understood only too well that without such bold visions practical engineers cannot build the future.

W. Bernard Carlson is Professor and Chair of the Engineering and Society Department at the University of Virginia. A historian of technology and business, he has published widely on invention and entrepreneurship, and his newest book is Tesla: Inventor of the Electrical Age, published by Princeton University Press.

Professor, Engineering and Society at the University of Virginia