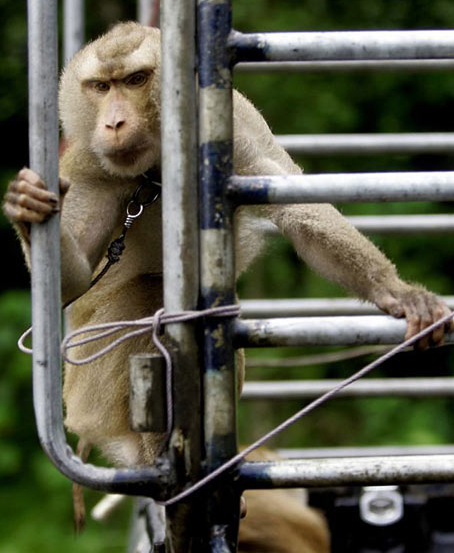 With a food industry that has recently begun to move away from the use of partially hydrogenated oils in light of the serious hazard they pose to human health, the demand for trans-fat free oils has caused a boom in the palm oil industry--an industry which was already thriving given the many applications for palm oil and its derivatives in the cosmetic, cleaning supply and chemical industries, among others.

Many animal lovers and environmentalists are now aware that in response to this growing demand for palm oil, tropical rain forests in Southeast Asia are being decimated in order to make way for palm oil plantations, destroying the habitat of the animals living in these forests. The United Nations Environment Programme identifies palm oil plantations as the leading cause of rainforest destruction in Malaysia and Indonesia. Deforestation for the establishment of palm oil plantations is responsible for habitat loss of the Asian elephant, tiger, Sumatran rhinoceros and the orangutan. But even worse is the fate suffered by those animals who are found eating palm fruit on these plantations, cutting into plantation profits. They are shot, beaten to death and even set on fire.

News of the atrocities associated with palm oil production has inspired many vegans and non-vegans alike, as well as companies that produce vegan and vegetarian products, to reject the use of palm oil. The shelf-stable oil they are turning to instead, often to create vegan butters and vegan cheeses, is coconut oil. Coconut oil is also found in many vegan shampoos, vegan shaving lotions and vegan cosmetics. Sales of coconut water are going through the roof--from less than half a million liters to almost 200 million liters just last year, and global consumption is expected to increase another 15 percent by the end of 2015. According to the United Nations Conference on Trade and Development, "World coconut oil production has been increasing over the past decade" and coconut production worldwide now stands at 62 million tons a year.

But in replacing palm oil with coconut oil, are animal lovers encouraging the use of one ethically problematic tropical oil for another? The answer, tragically, is yes, as much of the coconut industry is built on the backs of monkeys; pig-tailed macaques to be exact. 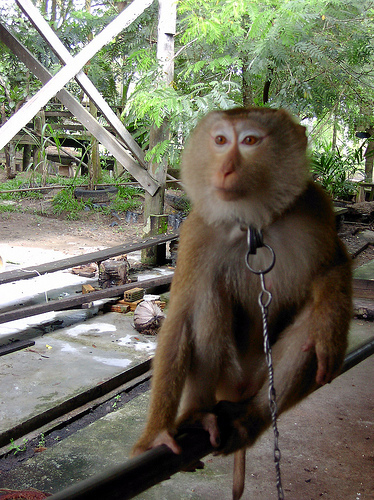 Agile and adept climbers, such monkeys--native to coconut growing regions in Southeast Asia--are capable of harvesting several hundred more coconuts a day than a human can; reports vary widely as to how many coconuts a day one monkey can pick, ranging from 300 to 1,000. Monkeys are chained by the neck and trained to pick only ripe coconuts and are then forced to do so, day in, day out and all day long. They are trained at monkey training facilities one visitor described as follows: "The primitive, primate campus, a simple, open sided shed," contains, "individual, meter high stakes, driven into the dirt floor... Onto each perch is tethered a solitary monkey by collar and chain. There are a dozen such perches, each one just out of reach of its neighbor."

During training and beyond, the monkeys are tethered or caged 24/7, sometimes with little to no opportunity for socialization. Where do these monkeys come from? According to one monkey handler, "Sometimes the monkeys are offspring of berok (already trained monkeys); sometimes they are caught [by poachers] on the forest with nets or traps. Often though, nursing mothers are shot and their babies are taken." 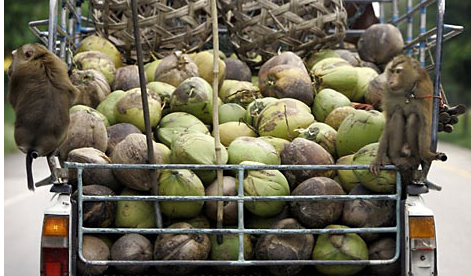 Harvesting coconuts with this method is prevalent throughout South and Southeast Asia, including Thailand, Malaysia, Sri Lanka and Indonesia, nations that together account for much of the world's coconut production. Indonesia is the number one coconut producing nation in the world, producing over 18 million tons of coconuts annually. Some reports also suggest that due to a labor shortage in parts of India where coconut palms are grown, harvesting coconuts with monkeys may have begun occurring there, as well.

Unfortunately, much of the reporting you will find on this issue approaches it from a disturbing "entertainment" angle in which the subjugation and forced labor of primates is treated as a curious, amusing oddity rather what it really is: exploitation of highly intelligent individuals. Instead of living fulfilling, autonomous lives in deference to their natural instincts and will--lives that would include social interaction with others of their kind, mating, raising young, moving about freely and resting whenever they choose--these monkeys spend their lives in endless toil and forced obedience to the will of humans.

Monkey training facilities are popular destinations for tourists, so much of the information available about the lives of these monkeys is whitewashed for the purpose of encouraging that tourism, glossing over the grueling labor and often dangerous conditions the monkeys are forced to endure, including climbing tall trees over and over again during the course of a day, retrieving fallen coconuts from thick brush, retrieving coconut cutting tools for their handlers that include long, sharp blades, and loading hundreds of coconuts onto trucks which then transport them from picking location to picking location. 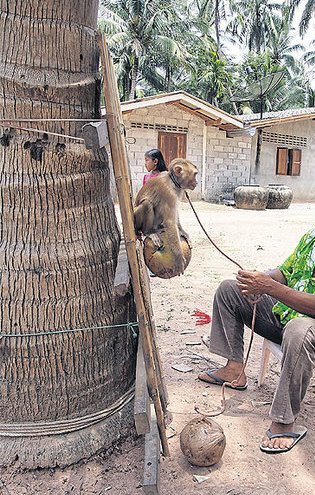 And though many articles about these monkeys contain quotes from handlers who state that they care about their animals, it is impossible to square such assurances with the long hours, hard labor, constant shackling and lack of autonomy these animals are forced to endure day in and day out for no personal benefit. Indeed, one handler admitted that sometimes "the monkeys are so tired from picking coconuts that they faint." According to the Bangkok Post,

On the website of one training centre, monkeys are branded as "efficient industrial agriculture labour" and it states that they are "strong...are not afraid of heights, do not complain, do not call for higher wages ... They do not require social security and accident insurance. Monkeys are therefore considered a 'living machine' that is very valuable for coconut farmers.

It is, in a word, slavery. And as human nature and history demonstrate again and again--where there is a profit to be made on the backs of non-humans, those backs are strained and often broken. By all accounts, the increasing popularity of coconuts, coconut oil and its various derivatives means that things are only going to get worse for these animals.

In light of the conflict between the humane values motivating so many to embrace a vegan diet and the treatment coconut harvesting macaques are forced to endure, activists have reached out to vegan companies to learn more about the harvesting practices associated with the coconuts they use to create coconut water, oil and other products that contain coconut derivatives. Some companies simply ignored the emails and letters. Some admitted they did not know and left it at that. Others indicated that they sourced their products from companies known to use monkeys. And others were happy to report that their suppliers did not harvest coconuts in this way.

Essential Trading company, a U.K.-based company, is an example of the latter. They write,


Essential Trading produces a range of organic coconut products all of which is sourced from sustainable coconut farms in Sri Lanka. We have visited the farms personally to ensure that they maintain the high standards we expect and that our customers expect when purchasing products from a company like Essential. The coconuts are harvested by hard working (human) farmers either by climbing the tree themselves or by using a long bamboo rod to pluck the coconuts from the tree tops. No monkeys are involved in the harvesting or production process of any Essential brand products.

As a company we are opposed to the exploitation of animals and strongly condemn the use of monkeys on coconut farms. 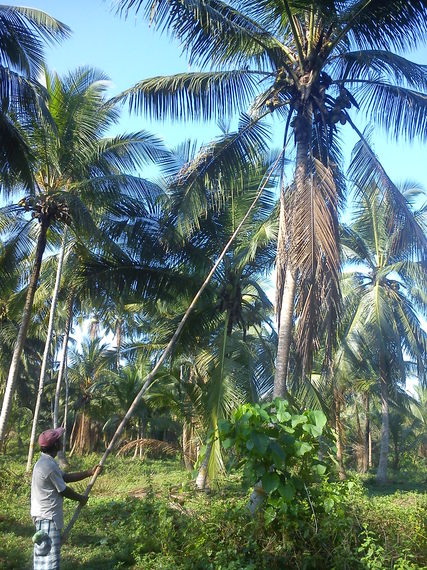 Unfortunately, not all companies feel the same way, including some of the most celebrated vegan brands. And while they proudly boast that their products are free of animal byproducts, and that of course is to be commended, their use of forced monkey labor is not something compassionate people can ignore. As ethical vegans, we cannot ignore the exploitation of primates under the illogic that their years of prolonged toil, the killing of their parents, their social deprivation, and ultimately, their deaths mean little to us unless their body parts make it into the food. Our embrace of a plant-based diet is, first, foremost, and finally, about preventing animal suffering. And the coconut industry--and the vegan products made from them--is rife with it.

In addition to Essential Trading, the following companies state that their suppliers do not use monkeys: 3 Buddhas, Aunt Patty's, BetterBody Foods, Carrington Farms, Dr. Bronner's, Earth Circle Organics, Harmless Harvest, Maison Orphee, Naked Coconuts, Nutiva, Ojio, So Delicious, Silk, and Spectrum Organics. It should be noted, however, that if they source their coconuts from Thailand, industry spokesmen there say it is "hard to believe" that primates were not used. In Thailand, monkeys pick 99 percent of the coconuts harvested.

Jennifer Winograd contributed to this story.

Pay coconuts, get monkeys: Training young macaques to work on plantations ... can be big business, but owners are under scrutiny over the way the animals are being treated.