Read about AT&T's mergers and broadband history: "The Book of Broken Promises: $400 Billion Broadband Scandal and Free the Net"

This is an open and shut case. Compare these 3 AT&T statements about broadband coverage in the company's 21-state territory:

"In the 25 percent of AT&T's wireline customer locations where it's currently not economically feasible to build a competitive IP wireline network, the company said it will utilize its expanding 4G LTE wireless network -- as it becomes available..." (Emphasis added)

On May 13th, 2015, New Networks Institute & Teletruth filed a Petition with the FCC to investigate AT&T's failure to live up to its previous merger commitments to have 100% of their 22 state territory upgraded to broadband (albeit slow) by the end of 2007. (AT&T sold off Connecticut in 2014, bringing the current total to 21 states.) But this is only part of the problem. In 2008, AT&T claimed, in writing, that it had completed the work. We are calling for the FCC to also stop the proposed AT&T-DirecTV merger proceedings until the investigations are completed. It is time to hold the companies' accountable for their statements and actions, or the lack thereof.

See: Map of AT&T, Verizon and CenturyLink's coverage areas. States include: (Based on the original companies prior to their mergers)

Note: AT&T sold off Connecticut's SNET telephone company in 2014. As there may be liabilities that could still impact Connecticut's customers, we will use 22 states in this accounting, as most of the quotes and information included the AT&T Connecticut holdings.

Other reporters and even politicians have also found that AT&T's fulfillment was a mirage. Huffington Post took the time to interview people and politicians in some AT&T's states and found major gaps in deployment. Dated November, 2012, the headline says it all.

The Reason to Investigate

Our call to investigate AT&T is also about the future: Does anyone really think that AT&T is going to upgrade 100 cities in the US with fiber optics at gigabit speeds? History shows that AT&T is just going to sucker-punch America again; AT&T (and all of the phone and cable companies) have always promised broadband to get more deregulation or to push through a merger. Every time, however, after the companies got what it wanted, they simply stopped working on their commitments.

This next chart should scare the FCC as it exposes how much AT&T et al. have been able to maneuver to NOT build out their territories with fiber optics or even broadband, as committed to in various state laws and even merger conditions.

In fact, the FCC's own recent revelation was that only 25% of Americans have two or more providers that can handle 25 Mbps, that 55% have one provider and the rest of the country has no providers with higher-speed-Internet.

We can now squarely blame AT&T (and the other incumbent phone companies, Verizon and Centurylink), for not showing up and providing competition or properly upgrading their networks to offer high speed broadband and Internet service. 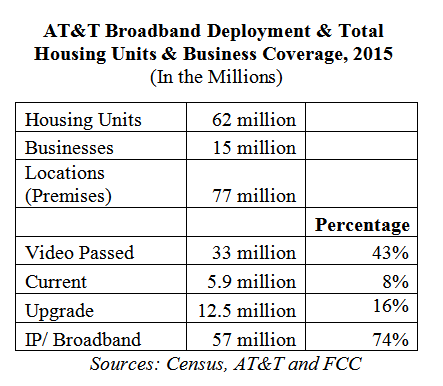 As we wrote, this is an open and shut case. AT&T, Inc. and its affiliates, including the former BellSouth, have been engaged in a pattern of deception and violated Section 1.17 of the Communications Act of 1934:

The AT&T-BellSouth merger required the newly combined companies to have completed deployment to 100% of their territories in 22 states with broadband capability of at least 200 Kbps in one direction by December 31st, 2007. Albeit slow, in 2007, this speed was the FCC's standard definition of High-speed Internet. In February 2008, AT&T filed with the FCC, signing a document (under penalty of perjury) that they had fulfilled this obligation and all other obligations that were part of the merger agreement.

And yet, as we document with the company's own statements, when we compared this AT&T-BellSouth merger commitment with AT&T's own statements in 2012-2015, including the "IP Transition" and IP Transition 'trial tests' currently underway, as well as statements made over the course of the last decade, or this year by DirecTV as part of the proposed merger, and we find that AT&T could not have had 100% coverage in 2007. As of 2014, AT&T and DirecTV specifically claim that at least 25% of the AT&T's 22 state territories did not have broadband available or in another statement that 15 million mostly rural areas do not have broadband.

As we show, this commitment was all make believe and AT&T's own statements will prove this point.

And it gets worse. There has been a continuous stream of misrepresentations by AT&T (and its previous incarnations of SBC, BellSouth, et al.) over the last two decades, some of which were used to create major public policy changes to the detriment of America's communications customers.

For example, in 2002, SBC-now-AT&T and BellSouth told the FCC that if the Agency blocked competitors from using the networks (via something called "unbundling") they would deploy fiber-to-the-home and fiber-to-the-curb (fiber optic wires within 500 feet of the location) with speeds of 100 Mbps, starting in 2004.

In fact, former FCC Chairman Michael Powell quoted these 'commitments' in his statements as one of the primary reasons to close the networks. Yet, they were all vaporware. Instead, AT&T pulled a bait-and-switch and rolled out U-Verse over the existing, legacy, utility, copper wires.

And let us be very clear; AT&T told the FCC that it had completed its merger requirements. This next excerpt clearly shows that AT&T knowingly signed documents where the company claimed it completed its deployment on time, February, 2008, under penalty of perjury. 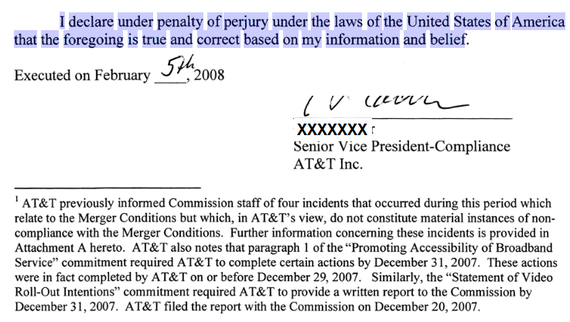 AT&T has claimed elsewhere it did fulfill its commitments. AT&T will say:

While America looks to make sure everyone gets broadband, shouldn't we find out what happened to rural America's broadband services that were supposed to have been implemented by now? AT&T now controls, even without Connecticut, almost half of America's communications networks.

If AT&T is going to abandon commitments that are made, shouldn't the FCC take precautions to not let that happen? If AT&T claims it will deploy 100 gigabit-speed cities, shouldn't that be in writing, with enforceable penalties?

And what about the communities and people who were left without upgraded service? Should they be just a punchline to AT&T's 'say anything' statements and actions?

For the details see our Petition for Investigation or The Book of Broken Promises.