How did the largest phone companies end up saving billions from discounts on wireless spectrum licenses that were supposed to be reserved for 'very small companies'? ...Hold that thought.

FCC: What is Spectrum & Dashboard

Recently, there has been some attention about the last wireless spectrum auction results. Ars Technica's headline reads:

According to the story, Dish was able to be classified as a 'very small business' at the FCC's wireless spectrum auctions and this allowed them to bid on discounted wireless licenses, saving the company $3 billion off of retail prices. This play was criticized by FCC Commissioner Ajit Pai, and others, and it has caused a bit of a tizzy at the Agency.

What about the Other $17 Billion or More?

In 2006, we filed a complaint with the FCC that documented $8 billion in small business spectrum owned by the largest phone companies; the documentation was based solely on the companies' own financial reporting and statements made.

"Teletruth today filed an $8 billion complaint alleging that Verizon, AT&T, (including Cingular, SBC, and BellSouth), T-Mobile, Sprint and others rigged the FCC wireless auctions by creating false fronts to pose as "very small businesses". This allowed these companies to secure valuable wireless spectrum at discounted prices."

I'll get back to some of this 'very small business' shell game in a moment.

How Did this Happen?

The impacts on everyone reading this are many --
By harming and blocking small competitors, it also blocked you from having multiple providers to choose from, who could have offered you lower prices, innovative services, or even better customer service. And, it also allowed the large companies to get the benefit of 'very-small-business' status to pay less government fees via large discounts, and it kept the auction bidding price too high for real 'very small businesses' to compete.

For me, this story starts 14 years ago when I found a stink-hole, a regulatory morass that is so deep it is hard to fathom -- yet the FCC never acted to clean up this mess.

This is from the FCC's Net Neutrality Order, February 26, 2015; the same FCC proceeding where over 4 million commenters chimed in, and the same Order that is now being sued over.

How corrupt is this? The following paragraph is about the 1997 wireless spectrum auction and it reveals that there were seven 'very small businesses' that won the bids.

This same paragraph appears in all 2008 FCC proceedings (about wireless spectrum), while an identical paragraph can be found in the FCC's Open Internet proceeding that started in 2014. 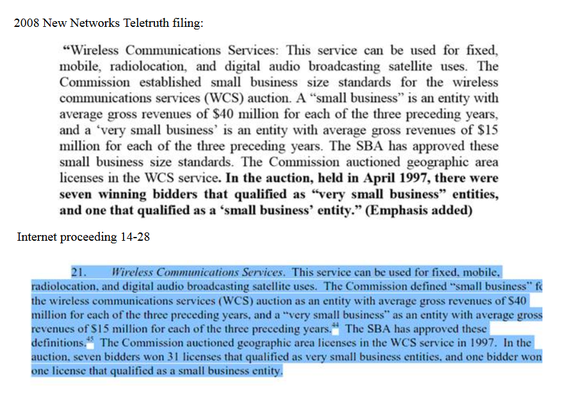 The real issue isn't simply that the FCC is writing about auctions that happened 18 years ago.

Any 5th grader would have asked the same question we did -- What happened to the wireless small business license holders since 1997?

In fact, in 2010, we filed a complaint as every FCC proceeding was using the same corrupted information and the FCC needed to deal with these issues as it was undertaking the creation of a "National Broadband Plan".

The answer: The complaint tracked this 1997 spectrum auction and we found that the majority of the 'very small business' licenses were now in the hands of what are now Verizon (MCI) and AT&T.

Now, the FCC could have re-written this paragraph to explain what happened to the spectrum licenses (the FCC oversees all licenses), anytime over the 18 years, but didn't.

Had the FCC bothered to either go through this boilerplate summary of the previous auctions (or investigated our claims) they would have noticed that the FCC's entire small business spectrum discount plan had been corrupted, not simply at the time of the bidding, but over the next decade as the small business licenses would magically end up being controlled by the very large phone companies.

Moreover, every paragraph in the FCC's Reg Flex analyses over the last decade, (including the current FCC proceedings), is suspect or a violation of the law as providing 'boilerplate' responses does not fulfill the FCC's obligations -- and it harms different classes of small business competitors (or harms the customers because of a lack of choice of providers).

1)The next two quotes is boilerplate language about the 1999 wireless auctions and it was just cut and pasted with no thought of what actually happened since 1999. The first quote is from the FCC's 2010 Open Internet Order and Opinion; the second from the recent 2014 Open Internet proceeding.

They are identical; figured I'd include them to reinforce just how bad this information is.

2)The next two identical paragraphs are about the independent ISP market and they, too, are pure garbage -- as the FCC has no information past 2007. I give you the full quotes of this paragraph.

Does it really say "We have no specific information about the number of small entities." What the...?

I Note that a small Wireless ISP (WISP) is one of the companies that are suing the FCC over its Open Internet Order. How can the FCC make a determination that these companies will not be harmed with this corrupted data? They can't.

While there are few small, wired-broadband-based ISPs left in America, today you can't choose your own ISP or broadband or cable provider over the wire coming into your home, as the companies that control the wire controls all the primary services over the wire. And this is because, in a large part, the FCC's impact study used corrupted data, and the FCC simply rubber-stamped the wishes of what are now AT&T, Verizon et al.

According to ISP Planet (and confirmed by Census data), in 2001 there were 9,335 independent ISPs in America and it was these small entrepreneurial companies that brought America to the Internet and handled over 50% of all US Internet customers.

And yet, the FCC closed the rights of these companies to use the networks, mainly because the FCC never bothered doing an impact study. Not only was the data old, but there was no analysis by the FCC that showed that there would be a wholesale killing off of 7000 small ISPs within a few years if the laws went through. We, in fact, did an impact study that was used by Small Business Administration's Office of Advocacy. And unfortunately our analysis was correct.

The consequence -- Why do you think there are only three phone companies, AT&T, Verizon and Centurylink, that don't compete and control most of the phone wires and the Internet service over the wires?

In more rural areas, there has been a rise in 'wireless ISPs', which offer broadband and ISP services, especially in areas where the incumbent phone companies didn't show up, but most are not competing in the wireless-cell-phone space.

Thus, because the FCC never did a proper analysis or collected accurate data about 'very small businesses' and the wireless spectrum auctions, the FCC never acknowledged just how corrupt the process had become -- and here we are.

We are estimating that the large phone and wireless companies were able to get over $17 billion or more of small biz spectrum.

Since 2006, when we filed a complaint because we uncovered about $8 billion in small business spectrum being controlled by the large wireless companies, it appears that nothing has changed. These are some of the transactions of AT&T with companies that were a 'very small business' or held licenses for very small business discounted spectrum.

In one transaction, where United Wireless Communications, Inc. ("United") transferred wireless spectrum to Aloha, it stated that "Aloha also qualifies as a very small business".

"United received a 25% bidding credit as a "very small business" pursuant to 47 C.F.R. § 27.702(a)(2). Aloha also qualifies as a very small business; as demonstrated in Exhibit Two , which provides the average gross revenues for Aloha and its affiliates and controlling interests for the preceding three years." (Emphasis added)

Conclusion: While we are estimating that over $17 billion of small business spectrum may have ended up in the hands of the large players, it could be a lot higher, especially if we include the Dish spectrum.

Should Dish be allowed to keep their spectrum?

America needs to see one chart -- All of the small business spectrum licenses, all of the winners of the bids, what was paid, what was saved from the discounts, and most importantly, who currently owns that spectrum, and the current value. Then we should go after all of the companies.

And the FCC should finally fix all of the other information in the Reg Flex Analysis, using it for a real small business impact study -- before the Agency creates new regulations.

I'd argue that these transactions should never have been allowed to occur and that the FCC was gamed, as much as it has been incompetent, or worse. And so, this spectrum should be returned and made available to actual small businesses and others who could figure out ways to bring in competitive, innovative services to market.

And if you want some disingenuous statements by AT&T, et al., one has only to read the recent articles about how the phone companies have been bad-mouthing the Dish spectrum deal.

"...AT&T also thinks Dish manipulated the FCC's designated entity system in its bidding strategy for the auction to get discounts on airwaves."