The A-Team was a fascinating hit TV series in that it was absurd even for the era in which it aired (1983-1987). The cartoon violence on the program was evident when, in the very first episode, a jeep carrying soldiers pursuing the team flips over spectacularly and crashes (it's an impressive enough shot that the show continued to use it in the opening credits for pretty much the entire run of the series). Voiceovers, of course, quickly assure viewers that both the driver and the passenger of the jeep were fine after the crash. That was The A-Team in a nutshell -- spectacular violence but people almost never actually got hurt, despite the A-Team's extensive use of explosives and automatic weapons. The A-Team was about a team of soldiers who were falsely accused of a crime that they did not commit in the closing days of the Vietnam War. Now on the run from the U.S. Military, they work as mercenaries helping out people in need while also trying to clear their names. 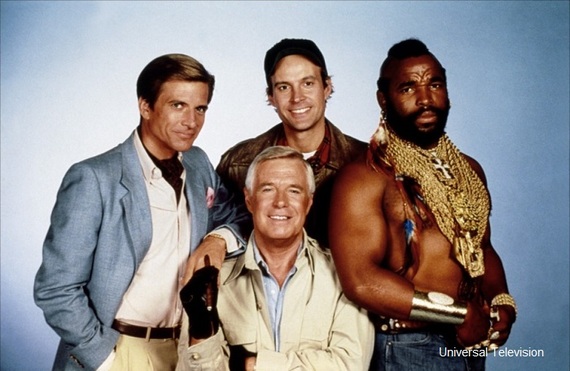 The team was led by Col. John "Hannibal" Smith (played by George Peppard), whose trademark phrase was "I love it when a plan comes together." The team consisted of Smith plus Lt. Templeton "Faceman" Peck (played by Tim Dunigan in the first two episodes and Dirk Benedict going forward), Capt. H.M. "Howling Mad" Murdock (Dwight Schultz) and, of course, Sgt. Bosco Albert "B.A." Baracus (Mr. T). Mr. T's B.A. Baracus quickly became the most popular character on the series (much to the annoyance of George Peppard). 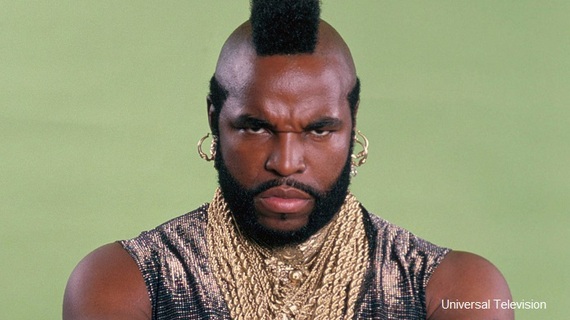 Fans of The A-Team were quite familiar with Mr. T.'s trademark phrase, "I pity the fool." However, is it really true that the phrase was never used on The A-Team?

Yes, surprisingly enough, just like how (as I featured in a past TV Legends Revealed), Gracie Allen never actually said "Goodnight, Gracie" on The George Burns and Gracie Allen Show, B.A. Baracus never actually used the phrase "I pity the fool" on The A-Team (there are other famous examples of this, as well, of course, like Kirk never saying "Beam me up, Scotty," Basil Rathbone's Sherlock Holmes never saying "Elementary, my dear Watson" and Rick never saying "Play it again, Sam" in Casablanca).

Mr. T., born Laurence Tureaud, was already quite a personality well before he began appearing regularly on television. He developed his Mr. T persona in the late 1970s while working as a bouncer (this is also when he began wearing gold chains and wearing his hair in the style of an African Mandinka warrior). His bouncer work led to him becoming a high profile bodyguard, working for such famous celebrities as Michael Jackson, Diana Ross and Muhammad Ali. His unique tough guy personality was given national exposure when Mr. T competed in a strongman competition on NBC called "America's Toughest Bouncer." He won the competition. He then competed in a follow-up dubbed "Games People Play" and also won that competition. Before the final match, Mr. T explained to the commentator for the event, Bryant Gumbel, that "I just feel sorry for the guy who I have to box. I just feel real sorry for him." Sylvester Stallone caught this second competition and was intrigued by Mr. T and that line in particular.

Stallone then wrote Mr. T into Rocky III as the main villain, Clubber Lang. It was here that the phrase "I pity the fool" was born. 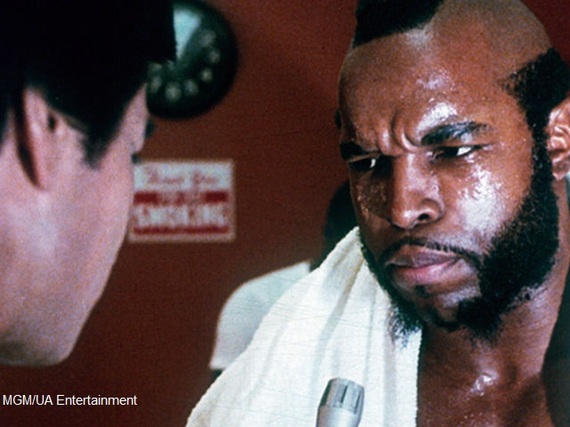 The film was a massive success and Mr. T was soon cast in The A-Team where he became an even bigger celebrity, eventually becoming one of the most recognizable celebrities in the country (the guy even did an inspirational video - Be Somebody or Be Somebody's Fool).

Mr. T would use the phrase "I pity the fool" constantly in public appearances, but for whatever reason, he did not bring it with him to The A-Team. Just to prove this, I decided to put myself through the greatest of tests - actually watching every episode of the series to make sure. And while it took me quite a while (I wasn't exactly thrilled to go through a bunch of these episodes in a row, so I spread them out for a number of months) I recently completed the series run and I can personally confirm that he never used the phrase on the series.

You often come across the suggestion that the quote "I pity the fool who goes out tryin' a' take over the world, then runs home cryin' to his momma!" is from The A-Team, but A. It never appeared on the show and B. I don't know if I believe that that phrase ever existed period. I've heard a .wav file containing the opening and the closing together ("I pity the fool that runs home cryin' to his momma") but never the whole thing.

Anyhow, as to the legend at hand, it is one of those odd ones where we're confirming a negative, so the legend is...