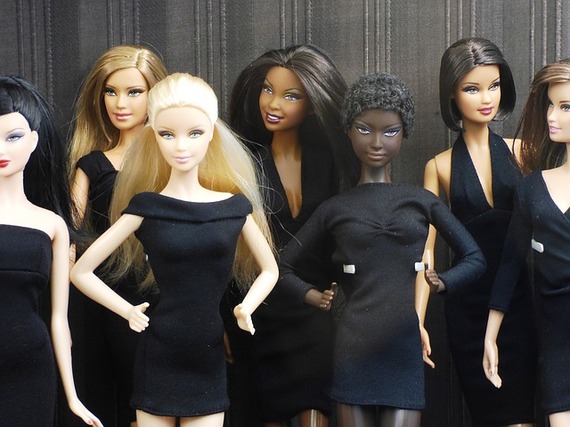 Now that Mattel has released their new line of more "realistic" looking Barbies, I'm assuming that the plastic doll police can take a big collected sigh of relief.

Yes, after years of taking hit after hit about how Barbie is an unhealthy body image role model for girls, Mattel has finally given in. One would assume this is because Barbie sales have dropped considerably over the last several years, and so, at last, we have a makeover.

The new dolls themselves look great, and it's going to be wonderful for little girls to have a wider variation of dolls to choose from. More variety, of course, will equal more money in doll clothes, shoes, etc.

But, I'm still confused as to what the original issue was.

Based on the reactions I've gathered, most people, mainly women, didn't even have a problem with the old Barbie. In fact, many women seem to echo the same sentiment -- that they all played with Barbie dolls when they were young and never once imagined they were supposed to look like her.

Granted, I'm sure there's the the odd little girl out there who thought she wanted to look exactly like Barbie -- and there are indeed grown women out there in the news who have even gone so far as to have plastic surgery to look like Barbie.

There are always going to be those who take things to the extreme.

Let's talk about boys. The classic super hero movies and action figures are a boyhood staple, right? Many of us know at least one little boy who loves to wear his cape or mask to the park and pretend they're Batman or Superman.

But does that mean all boys think they are supposed to look exactly like Batman or Superman when they grow up? Do they think they're supposed to grow up to be superbly muscular and fly through the air?

Maybe we should take all the "boy" toys like action heroes off the shelves so that boys don't go jumping off of roofs thinking they can really fly, or having poor body image issues because they don't have muscular bodies. 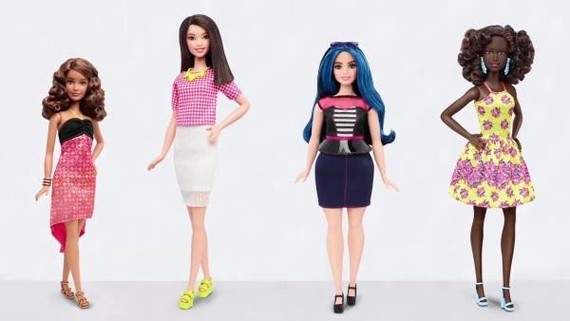 The new "Evolution of Barbie" line
Source: The Examiner

I think the point people are missing is that when children play with toys, the toys are simply a vehicle with which they can channel their imaginations with.

Perhaps it's us adults, who have grown up and lost much of our innocence and imagination, who are simply spoiling a party that was just fine to begin with.

If girls in general have lost interest in Barbie over the years, maybe that's just because there are so many more dolls on the market to choose from, and Barbie's 15 min (or 60 years) of fame are up.

However, you have to hand it to Barbie -- she's had a great run. Barbie has had just about every career you can think of and has maintained herself rather impressively in playrooms and bedrooms all over the world for decades.

I'm not sure exactly who the body image police are. They may be a group of mothers who were worried about their daughters growing up with poor self-esteem and being pigeon-holed into loving pink too much. That's fine. Many mothers worry about that kind of stuff, myself included.

But Barbie has been put up there on the blame pedestal for too long now.

It's time for the real people to start taking some responsibility for our children's self-image.

That's us. In the real world. Leading by example.

Do we really want to show our daughters that if you don't like the way something or someone looks that it's okay to just bombard that thing or person with negativity until we get the result we want?

I think it's obvious that the fuss over Barbie is really about something else. All of us women have insecurities, even the most "beautiful" of us. It's normal. But it was going on way before Barbie came along.

There is a real concern to protect our daughters from having poor body image. But it's not up to Barbie to do that particular job.

Barbie has tried to be diverse enough over the years to please everyone, whether she had brown hair and green eyes, or black hair and dark skin. But it still wasn't good enough for some people.

Give children a little more credit. The stories played out through Barbie over the last 60 years by imaginative little girls (and boys!) all over the world are filled with exploration and adventure. It's never been about Barbie's body for little girls. That's just the shell to put cool clothes on.

Nevertheless, we now have some interesting new editions to the Barbie family. Get your wallets ready and enjoy.

Catch more of Michelle at The Pondering Nook website and Facebook page, as well as her many featured articles at HubPages.

More:
Parenting ChildrenParentsbarbieToys
Newsletter Sign Up
Raise the kind of person you'd like to know
Subscribe to our parenting newsletter.
Successfully Subscribed!
Realness delivered to your inbox