Few analysts at the start of the year would have predicted Louisiana voters would elect a Democrat to be their new governor. Republicans have dominated statewide contests in recent years, with no Democrat earning even a third of the vote in races for governor and six other statewide offices in 2011, with incumbent Democratic U.S. Senator Mary Landrieu losing by 12% in 2014, and with Mitt Romney easily defeating Barack Obama by 17% in the 2012 presidential race in the state.

Before jumping to the conclusion that Edwards' majority win indicates he would have won under any electoral system, think again. Edwards benefited from a classic problem with traditional two runoff-systems. That is, one of the two advancing candidates (Vitter) was in fact the weakest Republican among the three that ran for governor this year.

In fact, it's quite likely that either of the other two Republicans in that first round in October would have defeated Edwards, just as Republicans won all six of the other statewide contests, including in yesterday's runoff for lieutenant governor by more than 10%. It's also quite likely that Edwards would have lost if there had been a runoff to decide the Republican nominee, or if Louisiana had extended its use of ranked choice voting ballots from only overseas and out-of-state military voters to all voters. But the state's so-called "majority system" of runoff elections in fact almost certainly did not provide a majority outcome.

To see how it happened, take a look at the first round results, courtesy of Ballotpedia. 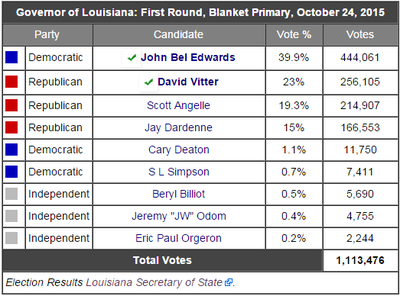 In Louisiana's system, you will win in the first round if you win 50% or more of the vote. It's an open system where all candidates run on the general election ballot (albeit with that first round confusingly called a "primary") and has real advantages over the California-style Top Two system and traditional primary election systems that are plagued by low voter turnout in primaries.

But no candidate won a majority in the governor's race. Edwards led the field with 39.9%, and he and his fellow Democrats collectively earned just under 42%. Vitter was in second with 23%, barely ahead of two fellow Republicans, with Republicans together winning over 57%.

As the election took shape, polls showed a clear contradiction. Vitter was getting the most votes among Republicans, but as explained in this Daily Kos review of polls before the October election, he was also the weakest Republican candidate when paired against Edwards and also lost when matched one-on-one against either of his fellow Republicans.

So let's suppose ranked choice voting had been used to narrow the field to the top two. Edwards clearly would have advanced, but it's nearly certain that Scott Angelle would have consolidated the anti-Vitter vote after Jay Dardenne was eliminated and surpassed Vitter to finish second and make the runoff. In the runoff he would have been favored to win, just as Republicans now typically do in statewide offices in Louisiana.

Angelle also likely would have won if the election had been decided in October with ranked choice voting without a runoff, as Vitter voters would have overwhelmingly ranked him ahead of Edwards. In that case of having a one-round election, Louisiana would also have been spared the highly negative, mean-spirited runoff into which this year's election devolved after the first round.

Note that if Louisiana had used the traditional primary system used in most states -- that is, Republicans holding a contest, Democrats holding a separate contest, and the top-vote-getter earning the majority even if receiving less than a majority of the vote -- Vitter would also likely have emerged as the Republican nominee and then lost. He only would have certainly lost the nomination if Republicans had used a primary runoff (as a few states do, including most in the South) or had an "instant runoff" in the primary with ranked choice voting.

The bottom line is twofold. First, John Bel Edwards should be congratulated for winning his election under the "Top Two" runoff rules used in Louisiana. Second, Edwards almost certainly owes his victory to a flaw in those rules that could be corrected by giving all Louisiana voters the power to cast ranked choice voting ballots that today is limited to overseas and out-of-state military absentee voters.