With "Back to the Future Day" coming next week, I thought it would be nice to spotlight a Back to the Future legend. One of the most iconic vehicles in the history of film is the modified 1981 DeLorean DMC-12 used by Doctor Emmett Brown and Marty McFly to travel back in time in the massive hit 1985 film, Back to the Future, which was written by Bob Gale, directed by Robert Zemeckis and produced by Steven Spielberg's Amblin Entertainment. 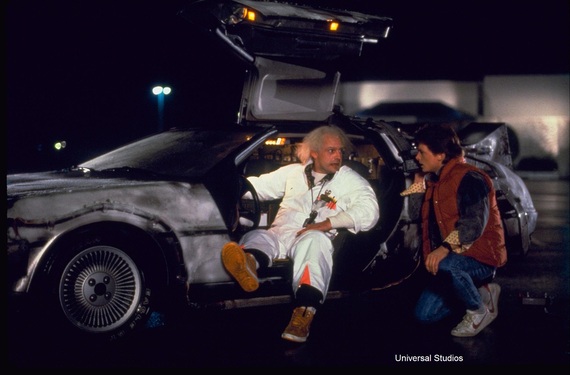 However, amazingly enough, when the movie was originally written, there was no DeLorean involved. In fact, it took a few drafts of the screenplay before the DeLorean became the means of time travel. Originally, the method Michael J. Fox's Marty McFly traveled back in time was quite different and his trip back to the future took place in something that would become very familiar (perhaps infamously so) to fans of Steven Spielberg's work -- a refrigerator at the center of an atomic blast!

Bob Gale and Robert Zemickis had been working on Back to the Future for roughly five years before the film finally got made in 1985. As we have seen in a number of Movie Legends Revealed columns over the years, movies often take dramatic turns as the screenplays are developed, like how the Ghostbusters originally traveled through time and space, how Robin Williams' character originally died at the end of Dead Poets Society and how Elsa was originally the villain of Frozen.

Gale and Zemeckis' first screenplay draft of Back to the Future set the story in 1982. Since a constant in the script has always been going back 30 years to when a teenager's parents were teens (the original concept of the film came when Gale was looking through his father's high school yearbook and wondered if he and his father would have been friends if they went to school at the same time), the journey would have taken young Marty McFly to 1952. Originally, the time travel device was a beam of sorts which was powered by plutonium (and Coca-Cola) that effectively "zapped" Marty back in time.

Of course, if the device was powered by nuclear power in 1982, how in the world could Marty power it in 1952? Luckily, that year happened to have the last above ground atomic bomb detonation in the United States in Atkins, Nevada (something helpfully referenced in Marty's history class earlier in the film), so the 1952 version of Emmett Brown (a Professor in this version of the film) rigged up a special lead-lined refrigerator with the device attached to it so that Marty could ride out the atomic detonation inside the refrigerator while the blast would trigger the time travel device.

Ultimately, it was determined that it probably was not a good idea to use a refrigerator in such a manner as kids might want to re-enact the scene and as any child of the 1980s recalls, kids suffocating in refrigerators must have been some sort of epidemic in the mid-1980s (that is, if you can trust Punky Brewster and G.I. Joe, which both warned of the danger of kids suffocating in fridges around that time). In addition, they figured that it would make more sense if the time travel device was mobile, as if you had a time travel device, wouldn't you want it to be able to move around once you got to wherever you were heading?

Here are the storyboards for that version of the script...

Eventually, it was determined that it would just cost way too much money for the special effects of an atomic bomb test. So they scrapped that idea and went with electricity instead and the rest is cinematic history.

Of course, over two decades later, the producer of the film, Steven Spielberg, would later use the idea as part of his film, Indiana Jones and the Kingdom of the Crystal Skull, as Indiana Jones finds himself at that very same 1952 test site and manages to survive the blast by riding it out in a refrigerator.

Perhaps this was an idea that was better left on the cutting room floor of BOTH movies. In either event, the legend is...