The Green Bay Packers have long been an oddity in the world of professional sports. In a thirty-two team league where the Buffalo Bills have the thirty-first smallest metropolitan area population at 1.1 million people, the Packers have less than a third of that population, as Green Bay, Wisconsin sits over 110 miles from Milwaukee's 1.5 million. So while the Packers (who are owned by the community of Green Bay itself) will almost certainly never move, when the National Football League (NFL) began having unrestricted free agency in 1993, the Packers' relatively small stature as a metropolitan area was seen as a major disadvantage to the team in its pursuit of prospective free agents.

But then God helped them out, with an assist from Mike Holmgren... Or maybe it was the other way around?

Reggie White was one of the most dominant defensive ends of his generation. After coming out of the University of Tennessee, where he set school records for most sacks in a career, season and game, White was recruited by the United States Football League (USFL), the rival league to the NFL that formed in 1983. The USFL pursued rookies aggressively with large promises of money. This allowed the USFL to sign some very big names, like Herschel Walker, Doug Flutie, Mike Rozier, Steve Young, Jim Kelly (they signed three straight Hesiman Trophy Award winners!) and, naturally, Reggie White.

White played for the Memphis Showboats for two seasons before the franchise (and eventually, the entire league) went under. The Philadelphia Eagles owned White's draft rights, so they signed him for the 1986 NFL season. White would go on to be one of the best Eagles of all time. In the eight seasons he played for the Eagles, he made the Pro Bowl every year and was named an All-Pro (first team) each season. He won the NFL Defensive Player of the Year Award in 1987, a season he complied a shocking 1.75 sacks per game! In total, he ended up with more sacks for the Eagles than games played for the team. 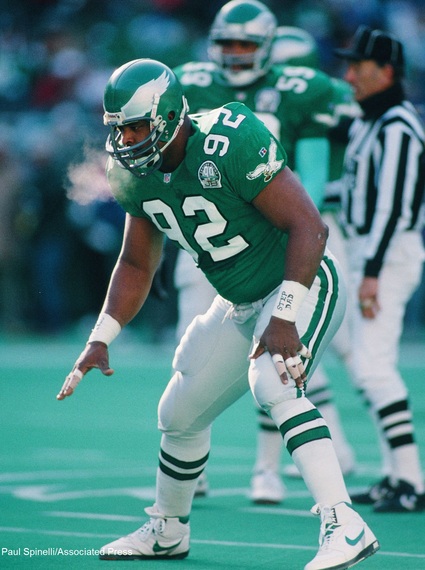 A court ruling gave White and a group of other players the right to become unrestricted free agents, thereby leading to a settlement with the league that created the modern era of NFL free agency. White did not want to return to Philadelphia (stating so he never felt that the owner of the Eagles, Norman Brama, had done everything it took to field a championship-level team), and in an article by Peter King for Sports Illustrated, White's agent, Jimmy Sexton, laid out the guidelines for what type of team White was looking for.

White wanted to go to a franchise intensely committed to winning, because in 16 years of high school, college and pro ball he has never been on a championship team. And wherever he goes, he wants to establish a Christian ministry and work with the needy of the inner city.

In the article, King mentions that White would be visiting Green Bay, but lumped them in with a bunch of other teams that seemed unlikely that White was seriously interested in signing with, instead focusing on the Cleveland Browns and the Washington Redskins, with White even noting:

The thing that worries me a little bit, is that with teams like Cleveland, Detroit, Phoenix, Atlanta and the Jets, they might figure, Our savior has arrived. In Washington, I think there'd be less pressure. I don't mind pressure, because I bust my butt on every play. But I don't want anybody to think I'm the only guy out there. Still, this is a great position to be in.

See? Green Bay did not even merit a mention as an also-ran team.

However, the General Manager of the Packers, Ron Wolf, kept persisting for White to visit Green Bay, and since White was already going to be in the Mid-West on a trip to Detroit, White agreed to come visit (again, though, this first batch of free agents all went on tons of visits -- the novelty of unrestricted free agency was appealing at the time, even unheralded free agents visited over a dozen teams).

The Packers knew that they were facing an uphill battle, most notably the very visible lack of an inner city for White to form his ministry, but also the fact that Green Bay had only had six winning seasons in the previous twenty-five years, plus it was a small town with cold weather and a reputation for not being willing to spend big money on their team. Man, when you put it all together, it sure does sound like a daunting task, huh?

Well, White was taken aback by the Packer approach. He was met by the General Manager Wolf, the coach Mike Holmgren and the defensive coordinator, Ray Rhodes, and instead of lavishing White and his wife, Sara, with expensive gifts, they just talked football with him. The Packers picked White up at the airport in a 4x4 Jeep Wrangler and interviewed him in a small windowless office in their facility. Instead of taking White to a fancy restaurant, they took him to a Red Lobster so that White could have his favorite food -- catfish.

At the end of the day, the Packers had three things to sell White. The first was the gentlemen that he met with -- Holmgren and Rhodes were (and are) an impressive coaching duo and they certainly could convince pretty much anyone that they had the right view of how to run a championship contender. The second was young quarterback Brett Favre, who had just led a young Packers team to a 9-7 record the previous season as a 23-year-old. The third was that Wolf had received permission from Packers President Bob Harlan to be financially competitive with any other offer out there to White. Years later, White told Harlan that he had no intention of ever coming to Green Bay, but once he got here it was a totally different story. On the plane ride home from Green Bay, White told his agent not to be surprised if White signed with Green Bay.

Holmgren and Rhodes continued to be persistent in their pursuit of White, even both attending a conference where he was speaking. They definitely showed him the love. 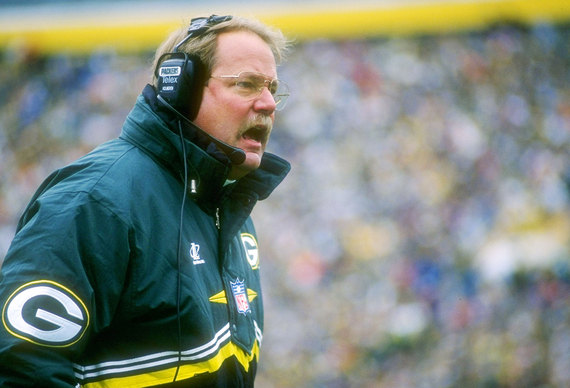 Holmgren, meanwhile, also made one of the most famous phone calls in NFL recruiting history. White was a religious man, obviously, and he had made public mention right from the start that he would go where God wanted him to go. Well, as the story goes, Holmgren called White one night and when he got White's answering machine, Holmgren said into the machine, "Reggie, this is God. Come to Green Bay."

Awhile later, White signed with the Packers for 4 years, $17 million, an (pardon the expression) ungodly amount of money at the time for a free agent, so while White might very well have appreciated Holmgren's joke, the money certainly helped.

As to whether Holmgren actually made the joke in question -- Holmgren himself has said that he did it, Packers historian Lee Remmel (who is practically the Word of God himself when it comes to Packers history) says it happened. Perhaps most notably was that the incident was reported at the time, as Don Pierson of the Chicago Tribune reported it back in July of 1993. The closer to the actual incident that the story is told is a good sign -- the incidents you really wonder about are when a guy 20 years later recalls some crazy thing that happened 20 years ago that he never talked about until now. So I'm willing to believe that Holmgren actually made the call in question.

As to the other issues White had with Green Bay, he noted in 1993 that, "I was with a friend one night who said, 'God told me to tell you not to worry about the ministry.' When I heard that, I realized this could give me an opportunity financially to do some things I need to do and want to do." It is true; $17 million could do a whole lot of good. And as for the worries about White, as an African-American, coming to Green Bay, Packer star Sterling Sharpe (also African-American) partially assuaged those fears earlier in 1993 at the Pro Bowl. Speaking of the signing years later, White remarked, "It changed the stigma that was on this team, that black players couldn't have fun up here, that the town was racist. I think by me saying, 'I'm going to play for Green Bay' and then liking it here, it changed a lot of guys' attitudes, black and white. I think it made guys want to play here."

The Packers certainly did do better with high profile free agents over the rest of the decade, including Defensive linemen Sean Jones and Santana Dotson, linebacker Seth Joyner, tight end Keith Jackson and kick returner Desmond Howard. As Harlan later noted, "It opened up a whole new era of football in Green Bay." 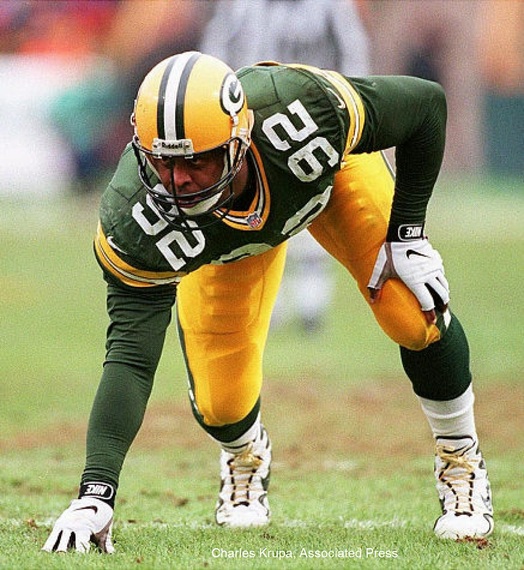 White continued to play strong football in Green Bay (although, naturally, not as amazing as he was in his youth in Philadelphia), making the Pro Bowl each season and making the All-Pro each year, as well (just with some second teams mixed in there). In addition, he won the 1998 NFL Defensive Player of the Year Award. Oh, and perhaps most importantly, he won a Super Bowl ring with the Packers in Super Bowl XXXI in 1997.

White passed away in 2004. Two years later he was enshrined in the Pro Football Hall of Fame.

Thanks to Peter King, Lee Remmel, Mike Vandermause and Pete Dougherty for the information behind this piece.

Be sure to check out more football legends at Sports Legends Revealed here.