Were people good at fencing in the Middle Ages?: originally appeared on Quora: The best answer to any question. Ask a question, get a great answer. Learn from experts and access insider knowledge. You can follow Quora on Twitter, Facebook, and Google+. 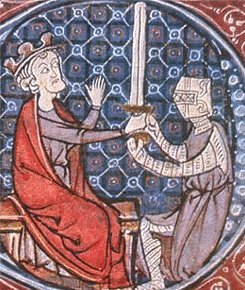 Firstly, virtually no movies about the Middle Ages are "very realistic." Most are little more than fantasies minus the dragons, with costumes, weapons and settings completely made up by the film makers with some kind of vaguely "medieval" theme in their heads. Most of the rest are a bizarre jumble of weapons, armor, costumes and artifacts from all over the medieval period, regardless of the century in which its set. So we get Vikings in fifteenth century helmets and Crusaders with fifth century swords. Pretty much anything you see in a "medieval" movie can be assumed to be wrong -- because it usually is.

The swordplay you see in "medieval" movies is also not based on anything from the period. It is usually just the kind of stagecraft fencing style that has evolved out of theater productions and is used in movie fight scenes. It's designed to look flashy and be as broad and vigorous as possible, while at the same time being relatively safe for actors and stunt workers. The moves are choreographed and designed to add drama. So they contain a lot of elements never seen in real sword bouts -- like the fighters getting up close and pushing their swords against each other (why?) -- and none of the elements you would see a lot of -- like all the cautious and wary circling around each other looking for a moment to attack.

Medieval swordplay also included a lot more grappling and close in fighting that most stagecraft fighting ever depicts, with a lot more kicking and punching of opponents who have got inside someone else's guard. The other thing that was common in medieval swordplay was gripping your swords blade for various parries or even for some attacks, something made possible by wearing gauntlets. 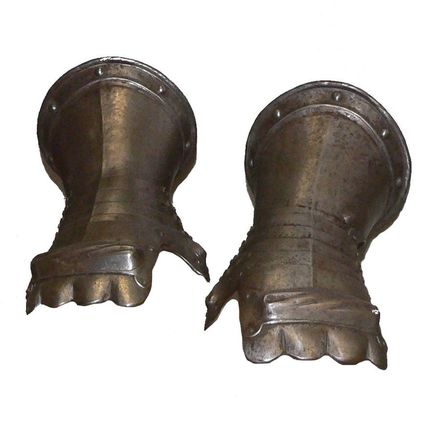 The other thing that is rarely shown in "medieval" movies is the use of shields, though even in fights outside of battles medieval swordsmen would at least use a small buckler. 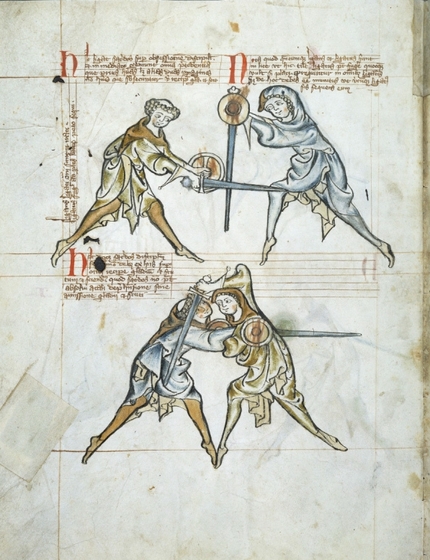 As for how skilled people were as swordsmen, it depends on who they were. Any member of the aristocracy would have been trained in using a sword (as well as a lance, shield and various other weapons) since early childhood and would routinely practice their skills, often daily. Other classes would not have been as skilled, though the popularity of medieval sword manuals shows that sword fighting skills were highly prized. And cheap swords were easy to come by -- in late medieval England a man could buy a cheap, mass-produced sword for as little as sixpence, though a better quality blade would set him back 1-2 shillings. In the same period a cow cost 12 pence and a horse from six shillings to £2, while a carpenter earned 3 pence a day and a mason 5 1/2 pence.

Finally, [the idea] that "against a man armored with chain mail and padding, a sword is really just a club" is nonsense. Mail will protect against most slashes better than thrusts, but it did not somehow make the wearer magically invulnerable against cuts by edged weapons. Both archaeology and iconographic evidence shows that mail could be penetrated by powerful slashing weapons. The fact that swords were primarily slashing weapons in the age in which mail armor predominated also shows this -- these people weren't idiots. Swords only became primarily sharply pointed thrusting weapons with a wide diamond cross-section when plate armor began to predominate. 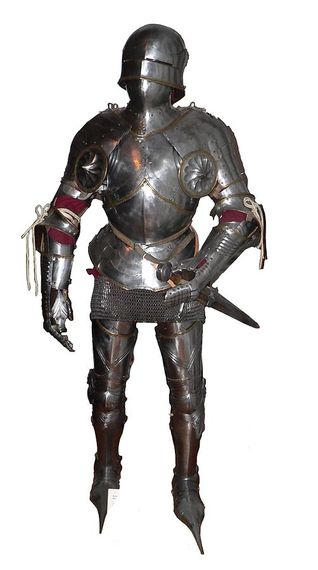