How do you mark the instant when human impacts so changed the planet that the signs will remain embedded in Earth's rock record for time immemorial? That is essentially the question that three important new scientific studies published online within days of each other tackled this month, in trying to figure out when the time we now live in, the Anthropocene, began.

I have more than a passing interest in that question, because in my job as a paleontologist, I've dedicated three decades to trying to understand whether, in the long run, humans are like any other creature that eventually ends up fossilized, or whether we hold a special place in nature -- as the drivers, rather than the passengers. I'm also one of the 38-member Anthropocene Working Group, the international committee charged with assembling the evidence that will help answer such questions. And finally, in my role as a professor at the University of California at Berkeley, I often teach my students about geologic time -- and not infrequently watch their eyes glaze over as I do.

Until I get to the Anthropocene, when everybody tends to perk up, because that's all about something near and dear to our hearts -- us. 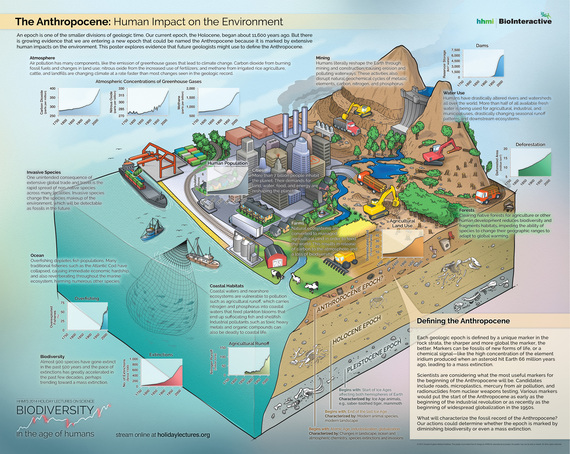 The Anthropocene has been loosely defined as the age of humans ever since Nobel Laureate Paul Crutzen first wrote about it a little over a decade ago. That loose definition is no longer enough, though, because researchers from many different fields are now actively debating about adding the Anthropocene formally to the geological time scale. If that happens, it would not only be a very big deal for earth scientists -- the academic equivalent of, say, adding a new amendment the United States Constitution -- but it would also underscore that people have become a geological force every bit as powerful as the kinds of forces that turned an ice-covered Earth into a warm planet, or that wiped out the dinosaurs.

To scientists, the definition hinges on whether humans are altering geological processes enough to result in permanently recognizable signals in the now-forming rock record, and if so, when those signals first became recognizable. Put another way, would geologists and paleontologists of the distant future see unmistakable signs in the rocks that indicated a new epoch had begun, just as during the 18th and 19th centuries, Sir Charles Lyell and his contemporaries clearly saw differences in the layers of rocks and fossils that they then used to define the age of dinosaurs (the Triassic, Jurassic, and Cretaceous Periods) and the age of mammals (the Tertiary Period)? Subdivisions of the Tertiary subsequently became known as the Paleocene, Eocene, Oligocene, Miocene, Pliocene, Pleistocene, and Holocene, the last of which, modern professors are wont to teach, is the geological epoch in which we now live.

But, perhaps no more. One of the new studies published this month, in the journal Quaternary International, suggests that if you were born before July 16, 1945, you were born in the Holocene; if your birthday is after that, you were born in the Anthropocene. That study is coauthored by 26 members of the Anthropocene Working Group, and they contend that fateful day in 1945 was geologically significant -- not to mention its societal impacts -- because the first atomic bomb, the Trinity detonation, exploded at Alamogordo, New Mexico, producing a uniquely human-made radioactive marker that will be recognizable in the geological record for the long term. 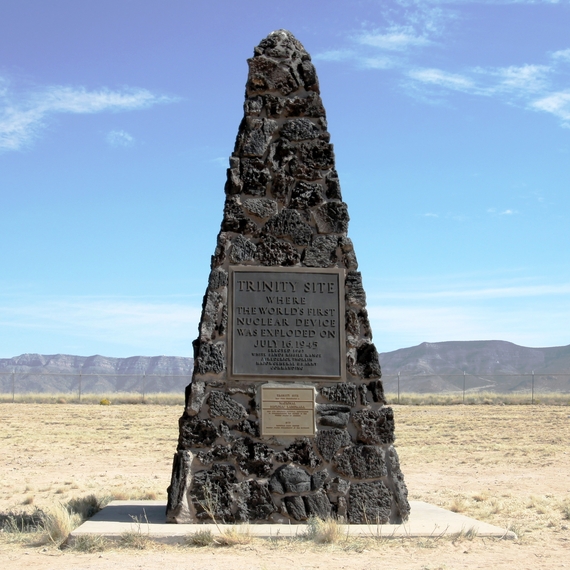 A monument to the beginning of the Anthropocene? Source: Wikipedia Commons

Subsequently, more than two thousand more nuclear blasts, most in the 1950s and 1960s, increased the amount of distinctive fallout. From a purely procedural standpoint, the utility of using the Trinity blast to mark the Anthropocene's beginning is a geologist's dream (although the reason the bomb was tested is more like a nightmare), because the event fulfills all of the mandates set forth by the International Stratigraphic Guide (the book of rules one must follow in defining epoch boundaries): it is a single time plane that applies globally; the fallout from the Trinity and subsequent detonations is unique with respect to constituents of any older geological deposits; the fallout is evident worldwide; and the signal will remain recognizable in the rock record for hundreds of thousands of years.

Another new study, published in The Anthropocene Review and co-authored by six researchers (one of whom is in the Anthropocene Working Group), points out that at about the same time as the Trinity blast, people worldwide also began accelerating the extent to which they were changing the planet's accumulating geological record in many other ways that would last: debris from plastics, new kinds of metals and other materials, rapid rise in deposition of nitrogen from fertilizers produced by the Haber-Bosch process, elevated levels of carbon dioxide and other chemical signatures from the burning of fossil fuels and heavy industrialization, transport of many species from one continent or coastline to another, pushing of many species towards extinction, and so on. That of course correlated closely with, and was a direct result of, the rapid rise in numbers of human beings that began at the same time. This so-called Great Acceleration of human impacts adds more evidence that the Holocene-Anthropocene boundary should be placed in the mid-20th century, that the boundary can be regarded as more or less synchronous globally, and that the Anthropocene, strictly defined, essentially started with a bang.

The third new study, also freshly online in The Anthropocene Review, proposes a philosophically different alternative: rather than a boundary that is globally more or less synchronous, it suggests one that more explicitly portrays the gradually growing human impacts on the planet from millennia ago right up to the present. This alternative definition was proposed by another subset of six members of the Anthropocene Working Group, and suggests the boundary should follow the demarcation between 'natural' soils and those that have been substantially modified by humans, by processes such as plowing, digging, fertilizing, bulldozing, and other ways people substantially affect soil formation and character. Such an approach would in effect draw a line through time that was oldest in the places agriculture first developed, and become successively younger as it tracked the spread of humans and their soil-altering impacts across the globe. That boundary would encompass thousands of years, and would record the drumroll of human influence growing louder and louder as Homo sapiens marched from past to present.

The two philosophically different proposals reflect the diversity of disciplines, evidence, and approaches of the many scientists studying this important question, and illustrate how science progresses when it is practiced best: through careful consideration of alternative possibilities, and weighing all the data. It will still be several months before any decision is reached about whether the bang or the drumroll is the more appropriate and geologically sound way to define the beginning of the Anthropocene. The Working Group is slated to report its findings to the International Commission on Stratigraphy, its parent organization, in 2016.

But one overarching point is already emerging from the accumulating data. If Sir Charles Lyell were digging through the detritus of today that will form the rocks of tomorrow, he would have no trouble coming up with distinctive features to define another 'cene' -- the Anthropocene.

Which means, humans are no longer just a part of nature. We are instead a force of nature that will change the world for good, or bad, depending on the choices we make today.

Anthony D. Barnosky is a Professor in the Department of Integrative Biology, Curator in the Museum of Paleontology, and Research Paleoecologist in the Museum of Vertebrate Zoology at the University of California, Berkeley. His new book Dodging Extinction: Power, Food, Money, and the Future of Life on Earth (University of California Press, Fall 2014) explains why our planet is in danger of a Sixth Mass Extinction, and what we can do to avoid it.