A girl's rubber sandal stood out in the beach wrack, that pile of sexily-reeking sargassum and other decaying sea plants, creatures and things heaved up onto the South Florida shoreline by the restless Atlantic Ocean.

The rainbow canvas foot strap with the SAVIOR patch was frayed and twisted. 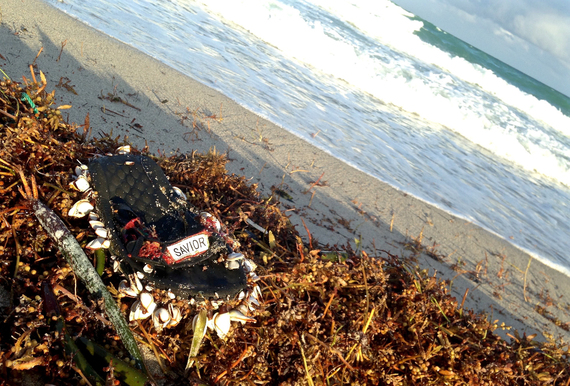 Rubber is tough for decades. The sandal bristled all along its warped sides with bright white shells like shark's teeth. Or an island woman's shell necklace polished fresh as salon toenails.

Something moved. Aliens! A wet and multi-tentacled mouth slithered out of one of the shells, grabbing, then yanked back in. I tried to focus. 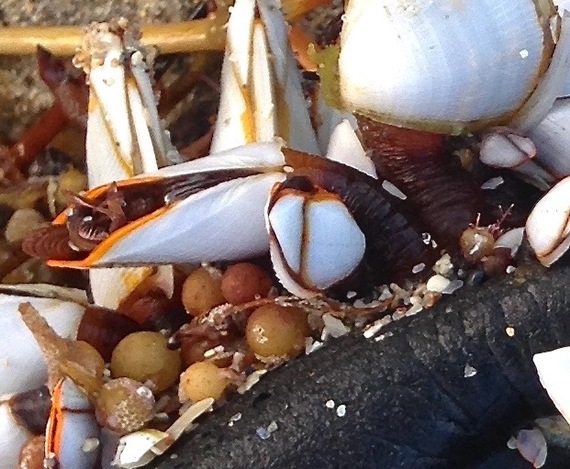 Gooseneck barnacles. I picked up the sandal. Now from a few shells the mouth-tentacle-grabbing-things slithered in and out.

Out in the open ocean, how had they, as babies, one after the other, chosen this floating rubber sandal as their spaceship and why had they only attached to its sides to colonize and grow?

How long had the sandal been walking across the ocean before finally coming to America and stepping onto land?

Had it circled for years in currents, not yet ready?

So much of the Atlantic story is African.

Now, after all that time, it was a matter of one more night before the beach tractor came raking in the morning. Would the goose barnacles succumb and die overnight, or later in the trash? Some were already still.

On what shore had the sandal first stepped into the water? Waves grab.

What young girl's life was behind it? She was cute and kind of thick, right? Maybe 11 or 12 years old?

Had she been a young girl running through the Shell oil fields of the Nigerian Delta?

People say Dominicans and Haitians don't like each other but after the quake I saw a "Con Amor Haiti" mural go up quickly in the Dominican hood of Barrio Obrero in south San Juan, Puerto Rico. 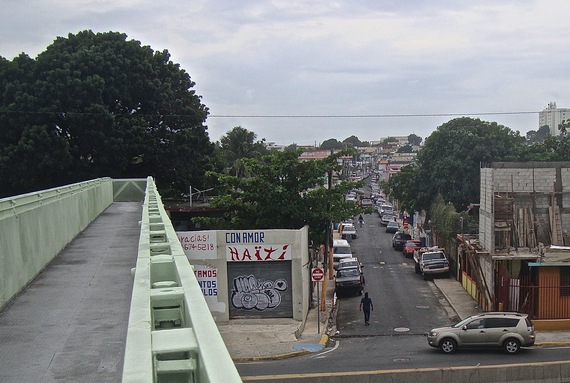 Maybe she had come from Gabon, where the beaches are still so wild that hippos swag down to the beach to surf.

I doubt she came from the Bahamas; that's only a day's bike ride away - if you could bike on water - and she'd clearly been out there a long time. Years.

I wondered about her house. Was her house made of concrete block? Plywood? Did she have a banana tree outside her house with big splaying green leaves?

Maybe her family had been wealthy and lived in a stately house high on a hill with wrought iron and brightly painted walls and a storm had simply caught her sandal.

Did she and her girlfriends have a favorite place to run to and play while giggling and talking about boys? I imagine the footprints their sandals or bare feet left in the dusty or dirt streets.

I think she had a bright white smile and painted toenails and her Ma braided her hair nice.

And how often had she gone down to the beach and looked out over the ocean toward America and pictured herself here? Thoughts of ... What is it like? Would she be safe? Would people love her in America, be nice to her? TV made it seem so much danger, but exciting and full of so much too.

Out in the ocean, on that long journey, those years - what moments?

Taking a break, the sandal surely paused in a patch of floating sargassum, good company, in the legendary Sargasso Sea where yellow, blue and green-lit dolphinfish aka dorado aka mahi mahi hung out, waiting for the next run of flying fish like in The Life of Pi.

At night, what swam below as it bobbed in black water under the moon, stars and Mars?

What were the attached gooseneck barnacles thinking all those years as they stuck their slithering mouths out to catch and eat passing little sea creatures and grow?

How many open ocean storms had slammed the sandal up and down 2-story high swells, and it wasn't anything to the barnacles?

My ass surely would have puked.

The rainbow-colored foot strap with the SAVIOR patch. 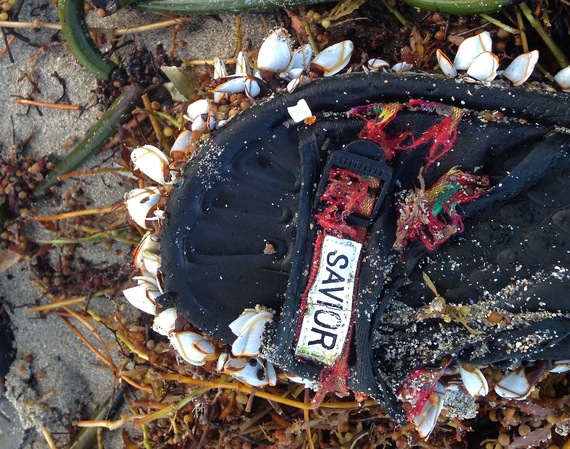 The young girl back then probably had no idea that on these shores those colors symbolized lesbian, gay, bisexual and transgender pride and rights. Where, recently, 223 miles north of the sandal's first contact with America, a man got punctured by evil in the inland city of Orlando and shot 102 people at a gay night club with an easily-purchased military assault rifle, slaughtering 49 of them, wounding the rest.

It was just a pretty sandal.

A week after mass murder in Orlando, the 91-year old Freedom Tower in Downtown Miami stayed lit in rainbow colors for a brief while longer. 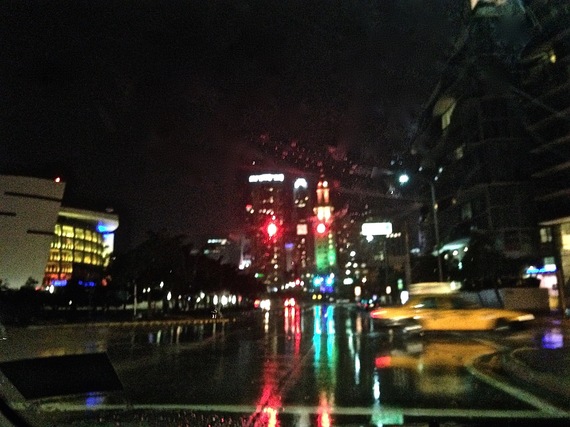 Fear & Loving: Where Sea Level Meets the Deep is a funder-supported literary blogstory by writer Jarid Manos chronicling life at sea level and in the oceans before climate change hits hard.