We as readers and viewers of popular culture do an interesting thing that I like to call "intellectual consolidation." When given a number of different films and shows and stories about a particular topic, whichever aspects that we deem to be the most memorable sort of end up squished together into a patchwork collective memory, whether that memory is accurate or not. I have written about this effect in the past, also in relation to a horror film, specifically the fact that there was no assistant named Igor until the third Frankenstein film and yet now Dr. Frankenstein having an assistant named Igor is considered an ingrained part of the Frankenstein story. Along the same lines, it was a surprisingly long and strange journey before we saw the motion picture introduction of the classic vampire fangs we are all familiar with in the story of Dracula.

While vampires (or vampyres, as they were originally spelled) existed in folklore for a number of years before the 19th Century and had even appeared in some literature, it was not until John William Polidori's 1819 short story "The Vampyre" that we began to see a somewhat consistent depiction of vampires, especially the idea of a charming killer (in this story, the vampire's name was Lord Ruthven). The 1845-47 serialized vampire story, "Varney the Vampire," was the first story to actually refer to sharpened teeth for a vampire, specifically noting "With a plunge he seizes her neck in his fang-like teeth." Of course, as you might note, the teeth were only fang-LIKE. But by the time Bram Stoker wrote the most popular vampire story of them all, 1897's Dracula, sharp fang-like teeth were a constant of vampire literature.

But while they were a constant of vampire literature, that was not the case for depictions of vampires in stage and screen. In the case of theatrical plays, the idea of wearing fake teeth was likely just an impractical one. Who in the audience would be able to see your teeth? And if you made them big enough for people to see, well, we would be talking about teeth so big that how would you possibly be able to get your lines out?

One of the first famous vampires appearing in films was F.W. Murnau's 1922 unauthorized adaptation of Dracula, Nosferatu, starring Max Schreck as the vampire Count Orlok. The key to the film was that Murnau did not have the rights to adapt Bram Stoker's novel, so he instead made a point of changing things (like Count Orlok instead of Count Dracula and referring to the bad guys as "Nosferatu" instead of as a "vampire"). Along those same lines, the makeup used to make Schreck look like a vampire had to make him look different than the classic depiction of Dracula from Stoker's novel, so Orlok had sort of rat-like incisors instead of the what we now think of as the classical vampire fangs. 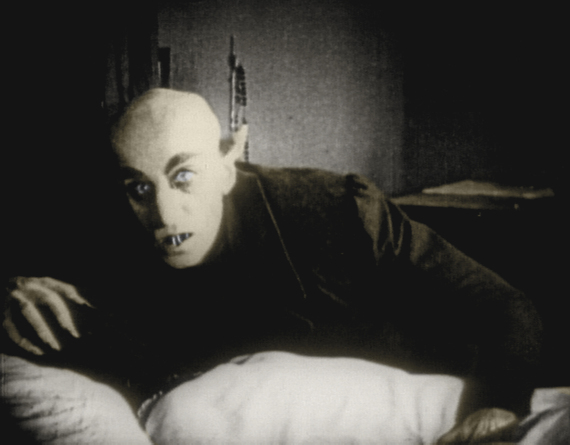 In 1931, Stoker's novel was given a proper adaptation by Universal Pictures, Dracula, with Bela Lugosi as Count Dracula. That film became the definitive depiction of vampires for the next two decades (even Lugosi's famous Hungarian accent became an accepted part of Dracula lore). However, Lugosi did not have fangs in the film. Similarly, then, all the various sequels to the film (and other films featuring vampires, a few of which had Lugosi himself) also were fang-less, so to speak. 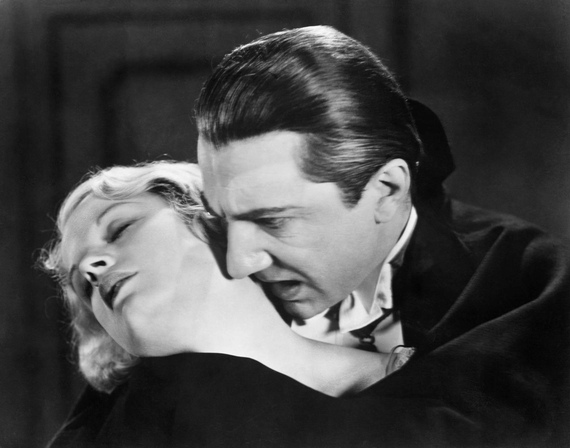 It was not until a Turkish adaptation of Dracula (based on a Turkish novel Kazıklı Voyvoda that translated and slightly altered Stoker's novel) Drakula İstanbul'da (Dracula in Istanbul) directed by Mehmet Muhtar with actor Atif Kaptan as Drakula that the famous vampire fangs were first seen on screen.

Five years later, Terrence Fisher would direct a British adaptation of Dracula for Hammer Film Productions starring Christopher Lee as Count Dracula. Lee's Count Dracula had fangs and soon Lee's visual depiction of Dracula became the norm for vampires ever since (amusingly enough, there was a movie about a teenage female vampire called Blood of Dracula that beat Lee to the fangs by one year - Lee's film, of course, though was more popular and thus more influential in the spread of fangs as a constant in vampire films). 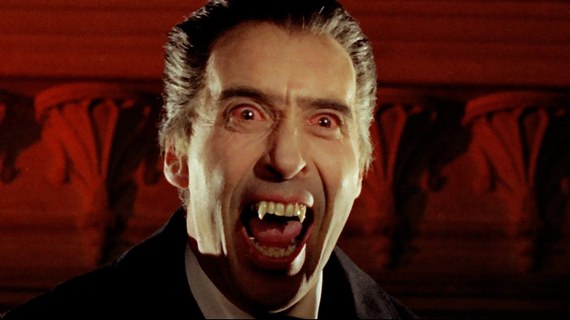 You will rarely if ever see a vampire without fangs in films or television since the Hammer Films' Dracula (released in the United States as Horror of Dracula to avoid confusion with Universal's 1931 Dracula with Lugosi).

So remarkably enough, vampire fangs in films only go back sixty years.

Thanks to reader Jonathan S. for suggesting this one to me! And thanks to Catherine B. Krusberg for her remarkable scholarship on this topic.