The year is 2025, and one of the original digital natives is sitting with his children - telling stories of the early days. "Back when I was your age... you could connect with anyone around the world, for free." The children are enthralled with the idea of freedom, and the wild open days of the web. "But then, companies and governments discovered that letting anyone send anything to anyone without control was allowing the free trade of digital property, and the free connections of criminals and terrorists, so we agreed to trade freedom for safety and security. That's how it all began to unravel."

Now, before you think this is crazy talk you should know that this is the concern being raised by Tim Berners-Lee, the father of the World Wide Web. "I want a Web that's open, works internationally, works as well as possible, and is not nation-based," said Berners-Lee. And yet, the rise of the nation-based web is upon us. And he's hardly alone in the concerns he raises.

The web is in danger, today.

Two of the authors of the Cluetrain Manifesto - Doc Searls and David Weinberg, posted a powerful update to their prescient work. In the sixteen years since the first publication, NewClues now says we're facing 'mortal dangers'. 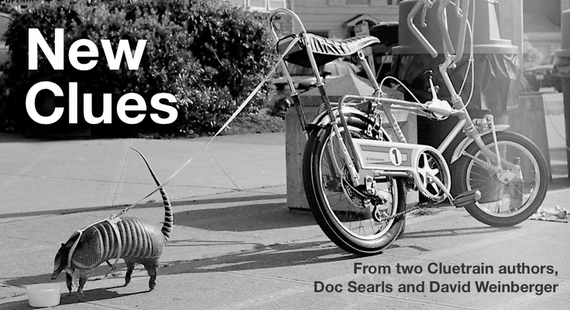 The highly regarded Pew Research Center went out to ask leading web thinkers feared most about the future of the web. The answers were stunning.

Paul Saffo, the noted futurist and associate professor at Stanford said, "The pressures to balkanize the global Internet will continue and create new uncertainties. Governments will become more skilled at blocking access to unwelcome sites."

Vint Cerf, Google vice president and co-inventor of the Internet protocol, represented many people's views when he optimistically predicted, "Social norms will change to deal with potential harms in online social interactions ... The Internet will become far more accessible than it is today--governments and corporations are finally figuring out how important adaptability is. AI [Artificial Intelligence] and natural language processing may well make the Internet far more useful than it is today."

Concerns about the potential Balkanization of the internet rose to public view when Russia's parliament passed a bill requiring all technology companies to store the personal data of their Russian users in the country. If implemented the rule could move Russia closer to the state of the internet in China and Iran. Both already control online information through heavily censored domestic information and pervasive filtering of foreign information.

The law is scheduled to be signed into law in September of 2016 by President Vladimir Putin. Mr. Putin was a former KGB officer and has described the internet as a conspiracy invented by the CIA.

The 'Net Threats' most feared according to Pew are:

Control means less freedom: Actions by nation-states to maintain security and political control will lead to more blocking, filtering, segmentation and balkanization of the Internet.

Already, China is known for its "Great Firewall," and social media crackdowns in Turkey and Pakistan lately show a global trend toward regulation of the Internet by certain regimes. And that's without mentioning stepped-up surveillance.

"Governments worldwide are looking for more power over the Net, especially within their own countries," said Dave Burstein editor of Fast Net News. "Britain, for example, has just determined that ISPs block sites the government considers 'terrorist' or otherwise dangerous. This will grow. There will usually be ways to circumvent the obstruction but most people won't bother."

We are moving to a world with more Online Surveillance

"Surveillance ... at the minimum chills communications and at the maximum facilitates industrial espionage[;] it does not have very much to do with security," said Christopher Wilkinson, a retired European Union official and board member for EURid.eu.

"The next few years are going to be about control," said Danah Boyd, noted Internet thinker and a researcher at Microsoft. Survey respondents told Pew that trust in open communications technologies will continue to evaporate in the wake of revelations about government and corporate surveillance. We've reported on the U.S./China "Cool War" that reignited because of Chinese fears of American corporate surveillance; it's just one flashpoint in a larger theme.

There's a serious worry that commercial pressures will affect everything from Internet architecture to the flow of information and more deeply endanger the open structure of online life.

In order to understand how quickly the web could change, it's important to remember that it's really not been around that long. The World Wide Web turned 25 on March 12, 2014. The invention of the Web by Berners-Lee was instrumental in turning the internet from the realm of computer geeks and scientists into a mass-adopted communications platform used by hundreds of millions around the world. Conversations among real people. Conversations that Doc Searls - one of the authors of the Clue Train Manifesto says deserve to remain free and uncontrolled by governments. "Conversations are not media. They are the main way humans connect with each other and share knowledge. The Internet extends that ability to a degree without precedent in human history. There is no telling how profound a change -- hopefully for the better -- this will brings to our species and the world we live in."

As the Newclues manifesto so powerfully says: "Long may we have our Internet to love." Indeed.