Have you heard the news? Millennials are lazy, unproductive and self-obsessed. At least that's what an infographic going around on LinkedIn is saying. 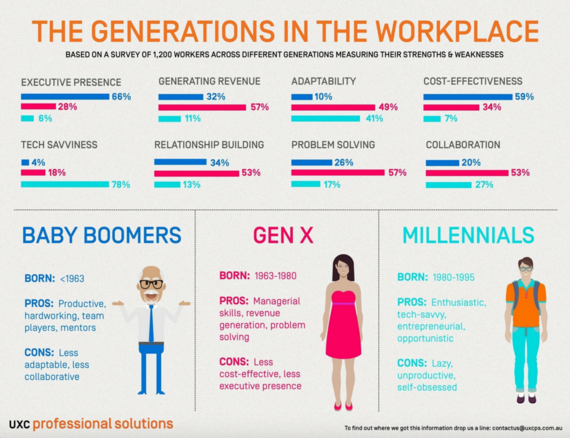 I was inspired (more dumbfounded) when I saw that someone posted it with the context that the user thought there was a general truth to these findings. It concerns me. And if it doesn't concern you, that worries me more.

UXC Professional Solutions is an information technology and services company and they compiled this data from 1,200 workers over these three generations. But I'm curious how many participants of each generation they surveyed and if they were asking the right questions. There's quite a bit of subjective "stats".

There are great pros for each. Some are more general than others such as the baby boomers being productive and hardworking; isn't it true that all sensible people in the workforce have these traits to land and sustain jobs? But regardless, for the most part, these seem fair.

However, allow me to focus your attention on the con lists. Baby boomers' and gen X's are given only subpar traits; skills that can be satisfied with a little time and effort. Except for the millennials. They are the only group with such harsh downfalls; lazy, unproductive and self-obsessed. These words are damaging and create a negative stereotype around an entire generation.

Millennials are the most educated group. The bachelor's degree is the new high school diploma. This makes the job market even more competitive. To set yourself apart, you need to have experience, a broad and specialized skill set and for some roles, an advanced degree. You need experience to land your first job. Ironic isn't it?

With that degree comes student loans. Loans that must be paid off. A college education can lead to an entry level position usually earning a median salary from 20 - 50K but many have to take on a second or third income to cover the costs.

So this brings me back to millennials being lazy. In my experience and the experiences of my coworkers, pupils, peers and friends, millennials are the most willing to learn. They are determined to be someone because time and time again, we are told that we can't do something due to our lack of experience and drive. We are constantly doubted and infographics like this one going around, only add to that stigma.

How can someone who has a degree and work multiple jobs to make ends meet be considered lazy and unproductive?

Are we self-obsessed? Maybe. But mostly due to never feeling like we are good enough in the eyes of our predecessors. We are constantly improving and pushing the envelope.

Don't get me wrong, we don't want a pity party. We don't need it. But myself and the generation I represent, want to be equally respected as productive members of society. Even if the older generations continue to believe that we are incompetent, it won't slow us down. No. Instead, it will strengthen us because the silver lining through all the doubt and misconception is that it pushes us to pursue our dreams and prove the cynics wrong.

"If you want to achieve greatness, stop asking for permission." -Anonymous