My family and about 2 billion other families had this brilliant idea to spend winter vacation at Walt Disney World. Sure, we could've done something more relaxing -- like sky diving -- but we chose this destination because we like lines. Love lines. Love the way that by simply roping off lines into a maze-like snake shape, one could walk nearly a mile without ever leaving a 30 foot radius.

Ok, lines make me insane, when in a line, I can truly only half pay attention to my children, as I'm busily trying to assess what pace we're moving at and forming mental equations that could rival any word problem on the SATs to determine how much time we have left (who said we wouldn't need algebra?).

While standing in the first line of the day, Ry, my 8-year-old daughter, asked who played Mickey Mouse in movies. "I don't know. I guess Walt Disney was the first Mickey, but not anymore because he's dead."

Clearly I was referring to Walt Disney, but maybe I should've thought out word choice because Ry's reaction was to scream, "What Mommy... MICKEY MOUSE IS DEAD??!!"

There are no rules in Disney about what you can and cannot say, but I'm gonna guess if there were some set of commandments -- screaming "Mickey's dead?" in a crowded line would be get you sent to some jail-land where the guards have oversized heads and the bars are soft yet, non-penetrable. And rightfully so, as I had never seen so many chipper little faces fall into frowns and tears so quickly, as moms struggled to do damage control while intermittently giving me the stink eye.

Sadly, it went down hill from there. I began to suffer what I call "line dementia," that's when crazy shit comes out of your mouth simply to fill time and to mess with your children for your own personal amusement -- it's somewhat of a survival tactic. Of course, it doesn't help when you're about to hurl after going on the ride from hell: AKA The Mad Hatter's Tea Party ride. (Do not let those cute cups and saucers fool you.) Regardless of why one suffers this affliction, be warned that your amusement may cause future therapy for your children.

Eh, screw it, I mean you are in an "amusement" park, right?

After Ry scarred multiple children in line when she broke commandment one:

Me: Honey, I was talking about Walt Disney... Mickey is as alive as ever, but you have to be careful what you scream, they do have a secret jail-world (what, I couldn't help myself?).

Me: They do and the guards are all the Disney villains like Cruella Deville and Scar and Maleficent.

Me: It's not, if you're there too long they turn you into one of the little children on "It's a Small World"... they were once real children visiting from different countries and now they're trapped on the ride waving and spinning around in circles for all eternity.

Ry claimed she didn't believe me, but during "It's a Small World" she squeezed my hand and muttered, "I think I heard one of the kids in Russia say 'Save me' when we went by."

That'll be a fun thing to explain to a shrink in 20 years.

Waiting for Pirates of the Caribbean:

J, my 11-year-old son: Mom, what is with all the turkey legs? People eating them look like cavemen.

Ry: I feel really bad for those turkeys.

Me: How do you think the turkey's feel? You know, without any legs?

Me: Yes, they do. I can picture them now on tiny little turkey crutches.

Ry: Well, at least they can fly.

Me: No, I think turkeys are flightless birds because they're really heavy.

Me: Well, maybe without the weight of their legs they can get off the ground.

Ry: Yeah, and then they'd be able to fly like they probably wanted to all along.

At Animal Kingdom walking a trail in fake Asia:

Me: Up ahead there are Asian tigers

Me: We're in Asia, so they're Asian tigers... you know, verses African tigers?

J: Wait, the Asian tigers are going to fight the African tigers?

(I didn't even do that on purpose, but I guess the word verses was somewhat confusing, so I went with it.)

Me: Yep, they will fight in an arena and it's a character experience. A guy dressed as Simba will stand at a counter taking your bets.

J: That is so cool! Are we doing that?

Me: Nope, I had reservations but gave them up when you said you were too old for characters.

Waiting for The Haunted Mansion:

J: (Referring to the people who's job it is the continuously walk forwards and sometimes backward on the treadmill like pathways) Those people must walk like a gazillion miles a day. I wonder if they like they're jobs.

Me: I know, and they don't even get paid to do it.

J: What do you mean?

Me: They're on weight loss programs they do it because they can't afford a gym and this is free... if you're willing to wear the costume and remind people to keep their arms in the ride at all times.

Ry: Look at that skinny guy, I bet he's been working here a long time.

Waiting for the Reflections of Earth fireworks display to start at Epcot:

Me: You know tomorrow we're going to the Animal Kingdom?

Me: I don't know, I've never been, but be prepared for lunch.

Me: You have to hunt for it.

Me: Yes, you do, right mom (turn to my mother who is in the middle of a game of Bejeweled Blitz.)

Me: It's the "Circle of Life Experience," I signed us up for it like six months ago... it's really hard to get into.

Nana: (Now paying attention.) It cost a fortune so we're not canceling.

J: (To 8-year-old and freaking out a bit.) You know we have to hunt for our lunch tomorrow?

(I love when one of them inadvertently takes over for me.)

Ry: I don't like fish. I wanted a burger.

Me: Well, you'll have to hunt a deer, that's the only meat option.

Ry: (Nearly in tears) Nooooo, I don't want to kill a deer.

I know, too far, right? Don't worry, I set them straight we all had sundaes and Bambi is as safe as Walt ever wanted him to be. He clearly didn't feel the same about his mother. Look, I bet you've had a bout of this dementia as well, sometimes insanity makes one feel more sane. 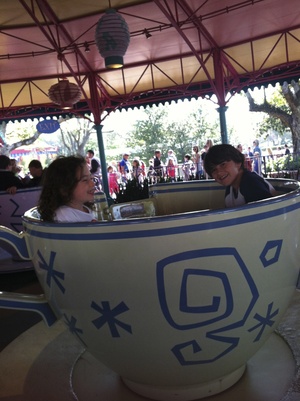 Relate to Life's Little Ironies With Me On Facebook

RELATED STORIES:
45 INSANE Things Your Kids WIll Say On Your Disney Vacation
Wanna Look Like a Supermodel on Your Next Vacation? Hit a Waterpark

Read more from Jenny at her Award Winning blog: The Suburban Jungle

More:
mickey mousefamily vacationsfunnyparenting humorTheme Parks
Newsletter Sign Up
Raise the kind of person you'd like to know
Subscribe to our parenting newsletter.
Successfully Subscribed!
Realness delivered to your inbox