We were sitting on the beach with this friend of ours, a single dude in his early 30s. Although he did his best effort to act like he was interested in what we had to say... he was truly doing what single dudes in their early 30s do when they're sitting on the beach. He was checking out girls pretending... he was not looking. And the girls of course played it like they did not know that he was pretending he was not really looking, when, in reality, they all knew he was.

This went on for over an hour but nobody was budging! To the extent that Diane decided to push him a little...

Diane: "Why don't you just go talk to them?"
Friend: "No, no, no. This isn't something my generation does at all!"
Mario: -raising an eyebrow and thinking to himself "Well, that's very nice of you to share this insight with us DINOSAURS... from a previous GENERATION!"
Diane: "What do you mean?"
Friend: "I mean I don't know any of them. I would need an introduction of some sort, or else I'd look like a moron! It's like Facebook or texting if you will. There's a "code" to it."
Mario: "Yeah, Yeah, like DINOSAURS must have had a code amongst themselves before they got wiped out from the Earth."
Diane: "Don't listen to him... Tell me more about the code."
Friend: "Well it's complicated, but let's say I'm introduced to this girl in a party somewhere and we end up exchanging phone numbers. Who-Texts-Who-First will pretty much dictates what happens next."
Diane: "Why wouldn't you call her instead of texting?"
Friend: "Because it's part of the code! If I text her and she responds fairly quickly, we're kind of cool. But if she stays quiet, after a little while I can look her up somewhere to see what she's up to. You know on Facebook, Instagram, Twitter or whatever... If she's posted something after I texted her, chances are from her own phone, she's basically telling me to buzz off."
Diane: "Well maybe not. Maybe she's just focused doing what she was doing. Besides, couldn't you simply interact with her on the social media feed she happens to be on?"
Friend: "Big No No in the code. This would be like stalking her. I'm no stalker... At this point I'd rather default to my dating app to try to meet someone instead of looking like a clown."
Mario: "Or a DINOSAUR."
Friend: "What's with him and the DINOSAURS?"
Diane: "Just let him be..."

Needless to say that little episode got us thinking about how we accost Seduction and Dating as individuals. It's probably fair to say that those of us, who were born before the 80s, have used different methods than our younger friends. Millennials have integrated technology in their approach, an approach that many refer to as "the code."

But we can't help to wonder, "Did Zuckerberg write the Millennials dating code?" We don't think so... Although one could argue that his only motivation when he first started coding Facemash was to hook-up with girls... but that's a story for a different post.

Look, we love you Millennials. We love you as work colleagues. We love you as community builders. We love you as idealists. We love you as children; after all, we have 3 of you guys! We just love you. PERIOD. And because WE LOVE YOU, we will look at 5 so called "code principles" and challenge them from a different perspective. Maybe not a better one, but one that we like to consider as "heart" based as opposed to... "cloud" based!

1) Who-Texts-Who-First
This seems to be at the top of "the code." We've heard it a lot, and, every time we're intrigued... So you met the guy or the gal, you seemed to have had a connection, at least that's what you think, but you'll leave without asking if it's ok to be in touch again? Why the unnecessary suspense? Just do you both a favor and clear the air before going your separate ways. Besides, you've got better things to do than spying an imaginary potential flirt on social media in response to one of your text message... 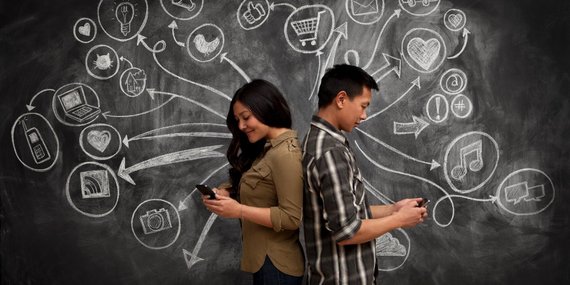 2) Each Pays Its Own Bill
We love this one. Long gone are the gender specific responsibilities in that area. But has it gone too far though? We think if both parties have been going out for a while, at one point the calculator phone app should be left alone when the waiter brings the bill... It's ok to let the other pay from time to time. Independence is good, but if one always needs to break things down to the penny, that could be a red flag. Mr or Mrs Stingy could become very annoying somewhere down the road.

3) Don't Emoji Me Too Much
Is this about Too Much Emoji or is it about Too Much Attention? Believe it or not, it was the same phenomenon when phones were parked in booths on street corners as opposed to resting in our pockets... If one was always chasing the other down with endless phone calls or unexpected visits at the beginning of a relationship, this was a recipe for failure. Indeed we think it's better to restrain the smiley faces when you're starting off... if you don't want to get an angry one!

4) Better to say "Good Friends" than "Boyfriend" or "Girlfriend"
We get that Millennials don't like labels. We also get that many want to avoid the "exclusivity" thing. Therefore several choose to stay noncommittal and say things like "Yes I'm seeing So & So but I'm keeping my options open." REALLY? Is this a mutual agreement? If it is, maybe you two need to start looking for another way to kill time... We hear bowling alleys are in dire needs of new players... On the other hand if it isn't mutual, we think you're way better than that. Stop playing games with that other person. You owe it to him/her and to yourself.

5) Waiting a Few Days to Wave Back
Some say it's 3 days. Others go for a week before following up on a date so they won't look stupid. Question is: Would you rather take the risk to look stupid instead of missing out on a compatible relationship? Listen, there's no right or wrong waiting period. You gotta follow your gut. However, we believe that if there is some kind of interest on your part, you should follow up sooner than later. Probably within a day or two. Remember, if you never swing for the fences, you'll never hit a home run!

Acclaimed Relationship Coaches, Authors and Bloggers Diane and Mario Cloutier have each experienced real-life relationship sorrows of breakups and divorces before finally attracting the blissful relationship each of them were longing for. They became romantically involved in 1998 and married in 2001. Together, they are the proud parents of three millennials.
Their new book, Relovenship® -Look Within to Love Again! (Xclamat!on Media, 2015) gives inspiration, hope and a step-by-step methodology to people who have had romantic disappointments and are still looking to find "the one."
Mario and Diane are now constantly traveling across the United Sates and Canada to spread their message: that it is possible to "live happily... EVEN after!" For booking inquiries or to learn more about them and their upcoming events, go to ReLovenship.com. Of course you can also follow them on Facebook or Twitter!