You know Netflix is full of amazing TV and movies. You know it's always there when you need it. And you know that it will likely be your Valentine's Day date this year.

But here are nine things you probably didn't know about the site.

1. Netflix knows you're lying about your preferences

Netflix pays more attention to what you actually watch than what you say you watch. Odds are, you're going to give movies like "Citizen Kane" really high ratings because you want to seem cultured -- but Netflix's algorithms know that you actually spend your time watching "Family Guy." So the site will suggest more cartoons than it will dramas.

Blockbuster almost bought Netflix in 2000. Back in the day, Netflix offered to sell Blockbuster a 49 percent stake in the company and become its online service, Netflix CEO Reed Hastings recently told the New Yorker. The site would have changed its name to Blockbuster.com.

The company has 76,897 different specific categories, according to The Atlantic. Some of the strangest categories include "Cool Moustaches," "Dark Canadian Thrillers" and "Understated Detective TV Shows."

4. Netflix employees can take as much vacation as they want

If you work at Netflix, you can take as many vacation days as you want. "It's about freedom and responsibility and treating people like adults," Netflix spokesman Joris Evers told the San Francisco Chronicle. Pretty nice, eh?

5. You can use Rotten Tomatoes to find good movies to watch on Netflix

Yes, you can take Netflix's personalized recommendations, but you can also find out what critics think of streaming movies on Netflix pretty easily with Rotten Tomatoes. One way is to go to the Rotten Tomatoes Netflix steaming page and look at different movies' ratings. You can also download a free Chrome extension that shows Rotten Tomatoes' ratings right on Netflix.

6. You can download a button to play a random episode

There are a few different Chrome extensions that you can download to add a "random episode" button to your Netflix page. If you've seen every episode of a show a whole bunch of times, it can be fun to watch them in a random order. 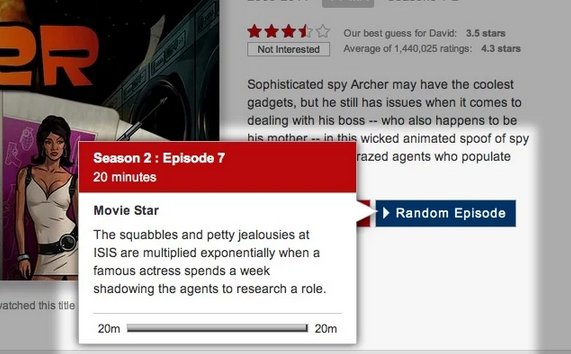 Last October, a Netflix customer showed off a hilarious conversation he had with a customer service representative in the style of Star Trek. That representative, "Cpt. Mike of the good ship Netflix," was later given the surprise of a lifetime when he was introduced to Captain Kirk himself, William Shatner.

8. You can watch a Netflix "example show"

The company makes hilarious and confusing "example shows" for internal use, and they're available for you to watch. You'll never see it in your recommendations, but if you search "example show" on Netflix, you can see some super strange videos. One of our personal favorites includes a hand in a fountain and a man juggling, running and reciting Shakespeare. It's unlike anything you've ever witnessed.

9. Netflix has a sense of humor

Last year for April Fool's Day, Netflix poked fun at its penchant for ridiculous categories and rolled out a whole bunch of fake ones. These categories included "Movies That Are In English But Still Require Subtitles," "Movies Featuring An Epic Nicolas Cage Meltdown" and "TV Shows Where Defiantly Crossed Arms Mean Business!"