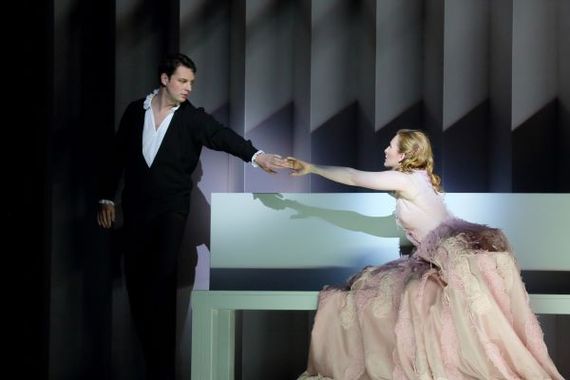 Two probing views of obsessive love spelled success for the marriage of inconvenience between Purcell's Dido and Aeneas and Bartók's Bluebeard's Castle. Their double-bill opening Saturday at the Chandler Pavilion marked the LA Opera's second collaboration with wave-making Australian stage director Barrie Kosky. It also heralded the promise of a long-term relationship.

Chief Director of Berlin's Komische Oper from 2012, Kosky debuted here last year with a spoofy Mozart's Magic Flute that looked like a silent movie. As with that production, this sparely staged pairing originated in Europe, but that's where their resemblance ends. Change-ups are a habit of the chameleon-like director.

Two and a half centuries span the two tragedies of Dido and Bluebeard, one with a lot of fun, the other with none. When Kosky teases in an interview before the opening that the works have little in common, you can count on seeing as many parallels as lanes on the freeway you took to the Music Center. He spins an enigmatic few of them in the printed program: "Arrival and departure, departure and arrival, a woman and a man, a man and a woman, a lost Eden, a forgotten Eden and a remembered Eden."

The protagonists of these tales are fodder for a psychiatrist's couch. Except for her brief amatory union with Aeneas, Dido's clinical depression keeps her so withdrawn from her court she heeds neither cheering up nor sinister plots. Duke Bluebeard's guarded split personality is a fatal attraction to obsessive new wife Judith, who, against his will and her own safety, makes him reveal his lethal all.

However linked the psycho-atmospherics may be, their respective stagings sharply contrast. Katrin Lea Tag's spare scenery, slow-rising curtains, and vivid costumes (owing much to Julie Taymor and Germany's Pina Bausch) evoke radically different landscapes, historic time zones, and sound-worlds. The use of unscripted whispers in both works heightens the drama and helps span their stylistic discontinuities.

Dido is bathed in bright lights and dressed in (mostly) pastel-infused but freakish period clothing. Its drama unfolds on the outer edge of the stage proscenium, barricaded from behind by an accordion-shaped screen. The narrowly defined space emphasizes the wafer-thin superficiality of the courtiers, and probably also Dido's hold on power. A long white bench stretches across the stage to seat the retinue: a collection of nit-wits, sycophants and nasty plotters, who by turns ape the droopy sentiments of their queen or trot off to bizarre and brazen behaviors.

All the while they sing nicely to Purcell's delicate score. ("If you drop it will break" was Kosky's earlier characterization.) The music was realized with great fluency in the large hall, aided in projection by the forward placed screen. The modest-sized baroque orchestra was peppered with period instruments (wood bassoon, oboe and flute, with a continuo of organ, harpsichord and theorbos) and conducted to precision by Steven Sloane.

As Dido's sister Belinda, soubrette soprano Kateryna Kasper is the court's excitable teenybopper. Her "To the hills and the vales" shimmered with youthful enthusiasm as sung to an enchanted audience from the outer edge of the orchestra pit.

Outlandish comedy comes from the combo of a sorceress and two witches sung by an improbable assemblage of three African-American countertenors, led by recent Operalia winner John Holiday (the sorceress) with G. Thomas Allen and Darryl Taylor. Dressed in pitch black and suggesting a trio of harping crows, they were the conspirators against Dido who pranced and danced and shook their jowly cheeks in celebration of their own wickedness. Holiday even changed into a mock Dido dress as he spitefully employed an imposter Mercury to order Aeneas' departure for Rome. This has the intended effect of fatally demoralizing his queen. The sketch leveled the audience with laughter.

Handsome Liam Bonner's Aeneas, en route from Troy to Rome, is presented more as feckless wanderer than purposeful hero. His plush baritonal colors lent plummy hues to his bass region and a tenorial gleam higher up. After Dido's fragile state of mind dismisses him for even thinking of leaving her, Aeneas stomps off stage and down to the the audience seating area, slamming a side door on his way out. Temper, temper.

Dido is the only role treated as serious, and the contrast of her demeanor with that of the others enhances her isolation. In her local debut as the sole holdover from European productions, Irish mezzo Paula Murrihy's aristocratic poise and pearly voice captured Dido's exquisite melancholy, furious anger, and, in her famous lament "When I am laid in earth" and its aftermath, her grisly end-of-life journey of shocking gasps and sighs. As she dies, orchestra members and courtiers, who earlier had migrated from stage to pit, depart one by one, so that when Dido finally expires in a slump, she is left alone to commune with eternity. The scene touchingly recollected the late Lorraine Hunt Lieberson of not so many years ago singing Bach's "Ich habe genug." 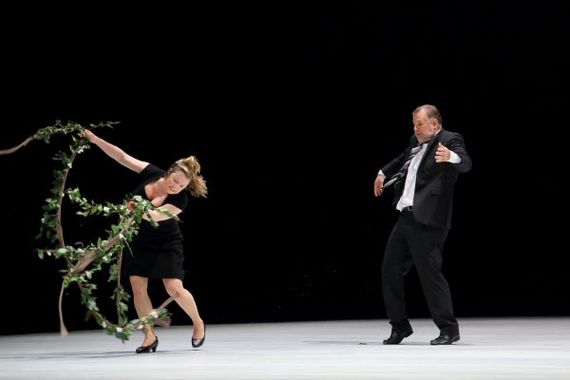 The mood of Bluebeard's Castle after the interval grows even darker and much heavier. It unfolds on a large empty disc sitting in the Chandler's cavernous backstage, blackened but otherwise unadorned. The two protagonists, also draped in black, rotate on this disc in a glacially slow but intense dance of death. The spatial infinity suggests the bottomless pit of Bluebeard's concealed and bloody marital history and also Judith's morbid curiosity. The use of people in lieu of sets, which was suggested in Dido, here becomes literal. Traditional productions employ seven actual doors, which Judith coaxes Bluebeard to open, but in this instance three sets of supernumeraries stand in for the chambers containing his former wives. Former iterations of the Duke himself stream gold dust, leafy vines, and water in a dystopian Garden of Eden made fearsome and fatal after the fall.

Claudia Mahnke as Judith and Robert Hayward as Bluebeard act out their Hungarian rendition of Whose Afraid of Virginia Wolf, forcing open the doors to each other's personalities. If, due to unrelieved narratives, their vocal tours de force can't quite keep us engaged for the hour-long layer-peeling intensity, their joint efforts earn points for honesty and sheer perseverance.

Bartók's score is an expressionistic time bomb. Its massive modern orchestra can be compared in size and sonority, also artistic importance, to those of Stravinsky's Rite of Spring and Berg's Wozzeck. Each morbid revelation in the opera is accompanied by an ever more splendid soundscape, the most dramatic being the brass ensemble that depicts the castle's magnificent gardens in a kind of post-Wagnerian grandeur. Steven Sloane and his instrumental charges bridged the huge stylistic chasm after Purcell's light textures to realize superbly this musical Mount Everest.

Apropos and worthy of note, the heavy costs of this joint production were not in sets but in musicians, and thanks for that.

Left in the mind's eye after the performances was Dido's white claustrophobia and Bluebeard's black infinity, like the eternally clinging teardrops in a yin-yang.

Photos are by Craig Matthew for the Los Angeles Opera
Top: Paula Murrihy and Liam Bonner as Dido and Aeneas
Bottom: Claudia Mahnke as Judith and Robert Hayward as Duke Bluebeard