August 25 marked the 101st birthday of General Vo Nguyen Giap, probably the greatest living general alive today. At this moment the General lies in a hospital where he has been for almost two years. General Giap master-minded the famous battle of Dien Bien Phu, which won Vietnam's independence from the French, in May of 1954. He was also responsible for Vietnam's winning the war against the Americans, when South Vietnam fell to the Communists in April 1975. The French called him the "snow-covered volcano" for his white hair and fiery composition.

In 1994 I was invited by General Giap to be the only western journalist to accompany him privately to Dien Bien Phu. I had been at his house a few days before, photographing him and having dinner with the family, when he leaned over and whispered the invitation in my ear, telling me not to tell anyone. 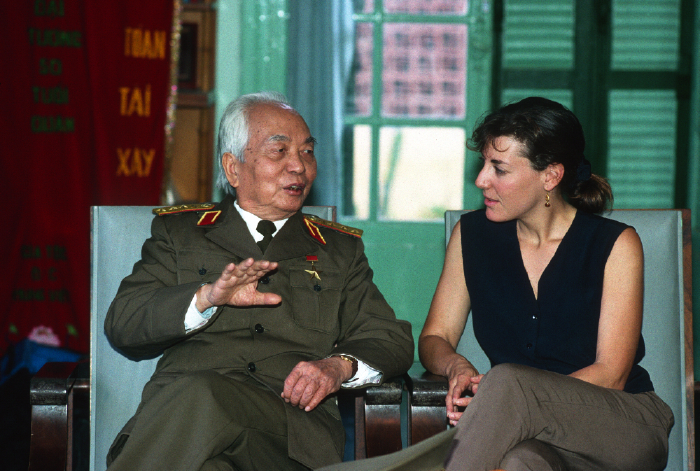 Journalists and photographers had been gathering for days in Hanoi wondering if Giap would be visiting Dien Bien Phu for the 40th anniversary of the battle. Now here he was inviting me to go with him privately, the week before the actual anniversary date of May 7th.

But let me digress a moment to explain how it was that I had such an exclusive relationship with this historic figure. My father, Stanley Karnow, the acclaimed journalist and historian of the Vietnam War, had interviewed Giap for the New York Times in 1990. A couple months later, I went to Vietnam, met with the General, photographed him and his family, and struck up a relationship that lasts to this day. 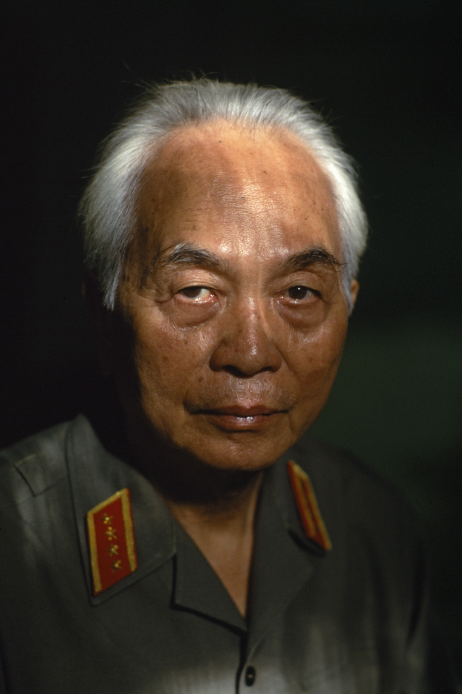 The French called him the "snow-covered volcano". Photograph by ©Catherine Karnow

Fast forward to May 1st, 1994. I was nervous with anxiety as we flew from Hanoi towards Dien Bien Phu. General Giap would be visiting not just the battle ground and a war cemetery, he would be returning for the first time in 40 years to Muong Phang, the secret encampment in the forest where he had hidden out during the months that led up to the battle, and from where he plotted the now-famous strategy of Dien Bien Phu. 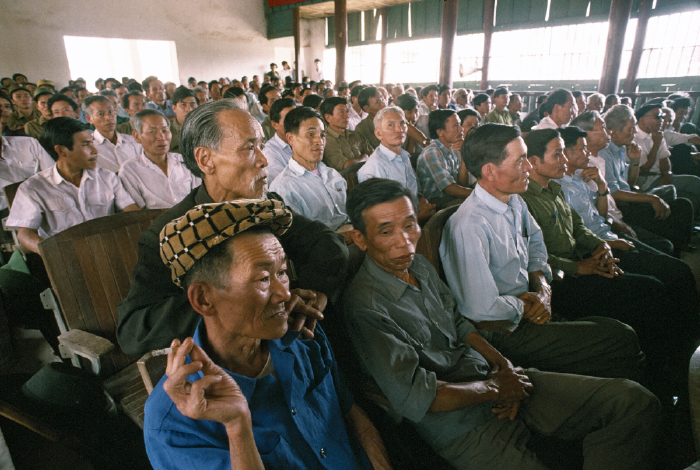 What was Giap's brilliant strategy? His method was basically to overwhelm the Vietnamese soldiers using sheer human force to push absurdly heavy Howitzer cannons up the steep mountainside and shell the French garrisons below, which by the way were each named after the French General's mistresses. The shelling was relentless. The French were so overwhelmed that the artillery officer committed suicide in the trenches.

Our big commercial jet landed and I found myself whisked away by government minders who didn't understand my special status. In a minute I was separated form the General with no plan to meet. I also had no idea where he was staying.

We dropped off my bag at my mini-hotel and I insisted they take me to the General. Despite their objections, we nevertheless set off in the jeep. The minders were confused, and weren't sure where to take me. Suddenly I saw a large guesthouse on top of a hill. My intuition told me that this is where the General was, so I repeatedly asked the driver to stop.When he didn't, I had no choice but to jump out of the jeep. Thankfully we weren't going very fast. I found the General's aide resting on the veranda. We knew each other and he wasn't surprised to see me. I learned that we would visit the battle site the next day.

General Giap would be going to Dien Bien Phu by helicopter, but I would go by jeep -- a rough, six hour trek over rocky terrain and pot-holed roads. It was malaria territory, but I hadn't had time to get any immunizations. I was told we would be at Dien Bien Phu in the early afternoon and the General would arrive at about the same time. 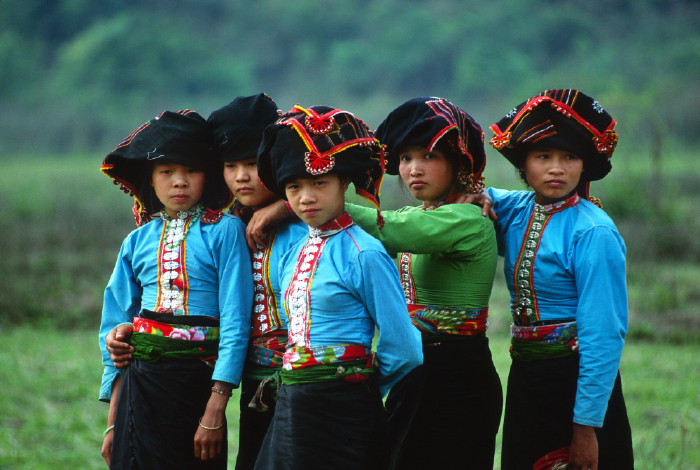 Many people waiting for the arrival of the General were Black Tai, the ethnic tribal people of the highlands. Photograph by ©Catherine Karnow

There were hundreds of people gathered on the battlefield to await the arrival of the General by helicopter. Expecting Giap would land at any moment, I made sure my cameras were loaded with film and I was in a good shooting position. The minutes passed. Then an hour and another hour. I had nothing to eat. There was only warm flat orange soda to drink. It was impossibly hot and the sun was relentless. If I went into the woods to take shelter from the sun, I risked missing the General's arrival. Stupidly, I hadn't brought enough film, so I couldn't even distract myself photographing the local people. It was too bad, as the people looked amazing. Many were Black Tai, the ethnic tribal people of the highlands. There were also children dressed like little Communist pioneers, with red scarves tied around their necks, holding welcome banners. I was beginning to feel faint with hunger and exhaustion. 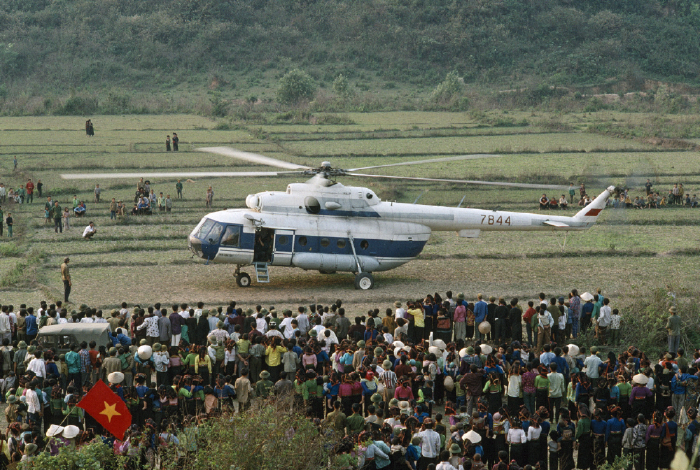 Finally, there was a buzz in the sky and we saw the great bird coming towards us. The people ran towards the helicopter as it landed and the General emerged waving to the crowd. We began the long trek up the mountain to visit the secret hideaway in the forest. We walked on narrow wood planks over streams and climbed over fallen logs. For a man of 83, the General was in excellent shape. As we approached the spot where he had lived for the many months leading up to the final battle, villagers greeted him with great reverence and joy. He hadn't seen some in 40 years. 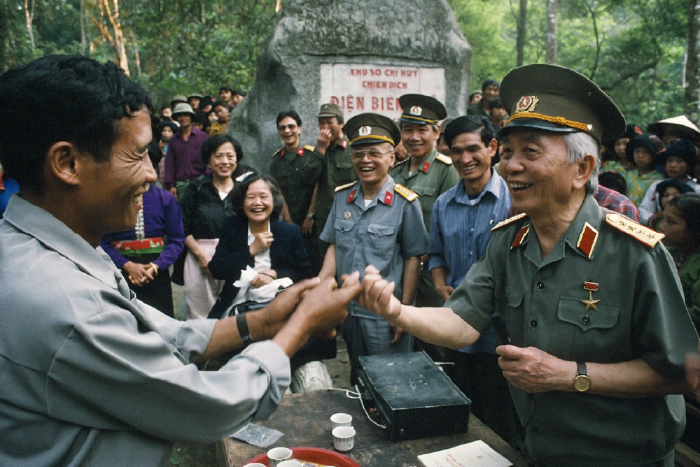 In Mung Phang, villagers greet him with great reverence and joy. Photograph by ©Catherine Karnow

In moments we were in the tiny hut, the exact same hut where he had plotted the strategy of the battle. On the wall was a replica of the same map he and his commanders had used forty years ago. Giap recounted his memories of those days spent in the hut. He said, "my only regret is that the same commanders who were with me that day are no longer with us and cannot be here today." 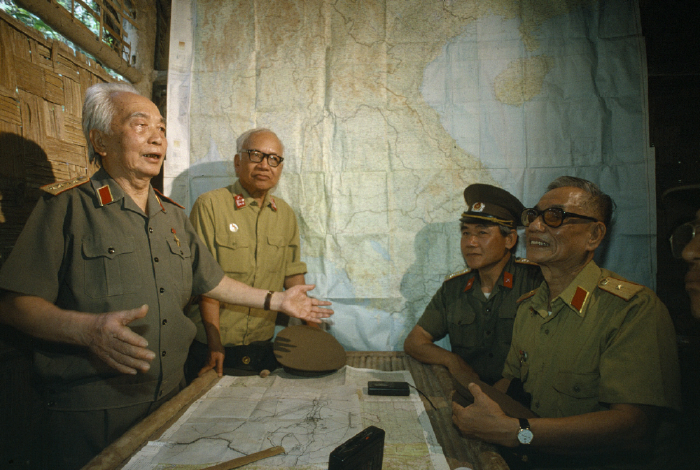 For me, it was momentous to be in that tiny hut in the middle of the jungle of Northern Vietnam, hundreds of miles from anywhere, witnessing a living legend recall his personal moment in history.