We all read the same Nutrition Facts label, and it's always based on a 2,000-calorie diet. But we all have different nutritional needs. So where did that number come from?

"It was as close to the middle as we could get, and it was a round number."

That's Burkey Belser, designer of the original Nutrition Facts label that appeared on the shelves in 1993. The black-and-white box we know today replaced a patchwork of label requirements that varied by state. Now, after more than 20 years, the U.S. Food and Drug Administration (FDA) is redesigning Mr. Belser's label to align with current nutrition guidelines and consumer behavior, including expanded serving sizes and a new category, "Added Sugars."

But the 2,000-calorie reference value is not up for debate. In the FDA's proposed revision of the Nutrition Facts label, published earlier this year, the authors suggest no change to the label's "reference caloric intake level." People understand it, the report says, and it isn't possible to tailor the label to individual caloric needs.

2,000 Calories: A Great Compromise:
In the early 1990s, 2,000 calories lay well below the daily energy requirement for most people, and about 350 calories below the population average. The National Academy of Science (NAS) recommended a broad range of caloric intake, from 1,900 for women age 51 or older to 3,000 for men in their late teens. Average caloric needs hovered around 2,200 for women and 2,900 for men. The NAS has only revised its energy intake recommendations slightly. (1)

In public comments about the original label, health professionals and consumer groups argued that 2,000 calories would be the best reference figure, as it would discourage overconsumption. Moreover, measurements of calories to the thousands were considered most reliable and easy to interpret. The U.S. Department of Agriculture and industry groups countered that the figure did not represent what the vast majority of Americans needed to consume in a healthy diet. (1) 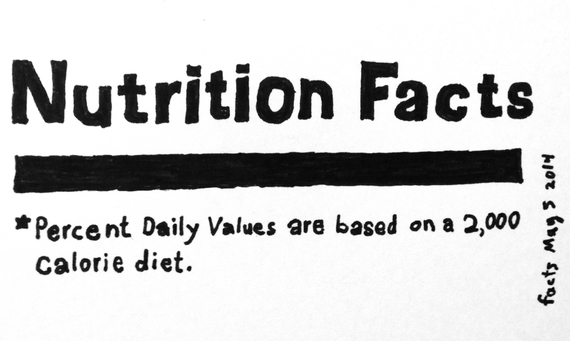 Ultimately, the FDA chose 2,000 calories for simplicity and standardization. This, and regulators were hardly concerned that consumers would consume too few calories after reading the label.

According to Michael Jacobson, Ph.D., executive director of the Center for Science in the Public Interest, the label's 2,000-calorie point of reference represents "a compromise between precision for everyone and simplicity of use."

"It was the best of a bad situation," he said. "In order to put out a label at all, we had to draw a line in the sand somewhere." That is to say, it was necessary to compromise precision and individualization to achieve the efficiency, consistency, and simplicity of one label.

Reference or recommendation?
Many factors impact how many calories you should consume to achieve a healthy weight, including age, gender, size, ethnicity, and activity level. Because of this, both the FDA report and the current label clearly indicate that 2,000 calories is not a recommended Daily Value, but a reference value. "Using 2,000 calories as a Daily Value could over emphasize the 2,000 calories as a definitive reference for all individuals," stated an FDA representative.

The FDA's proposed new label actually provides less context about how caloric needs vary from person to person. At the bottom of the current label, there is a footnote. It presents basic information about daily values based on 2,000- and 2,500-calorie diets, including the associated recommendations for macronutrient intakes at those levels. The proposed label leaves out this information.

Whether 2,000 calories should be a point of reference or a Daily Value remains controversial. Dr. Jacobson, a scientist and nutrition advocate, states, "I disagree with the FDA and believe that 2,000 should be used as the daily value for calories, with labels showing a percentage of daily value."

The public comments on the proposed new label seem to side with Dr. Jacobson. The FDA reports that a majority of comments "supported the addition of a Percent Daily Value for total calories." So, for example, if a blueberry muffin contains 500 calories, the label would indicate that the muffin contains 25% of the daily value for calories. Like all Percent Daily Value figures, this would be approximate and would require interpretation by each consumer.

Comments also indicate that after all these years, consumers and nutrition advocates have come to believe that 2,000 is an appropriate reference point for the label, with a majority in favor of maintaining that standard.

While the FDA does not plan to include Percent Daily Value of calories on the label, the agency welcomes further comment on the proposed changes to the Nutrition Facts label through June 2, 2014.

This post first appeared on newfoodculture.com, where Leo Brown writes about food, nutrition, and health.

Writer and founder of newfoodculture.com