More and more vegans are popping up across the country as the plant-based lifestyle continues to trend. Celebrities are jumping on board, mega chains like Chipotle and Subway are swinging things meat-free. Heck, even Silicon Valley is in, with Bill Gates funding vegan mayo and the Twitter co-founders backing a new faux meat. So now that there are more vegans, there are also more omnivores out there dating vegans. This is where things can get weird. While dating a vegan is not that fundamentally different than dating anyone else (even vegans like kicking back a beer and binge-watching House of Cards), there will be bumps along the way, like when deciding on a restaurant or battling about the ethics of your favorite leather recliner.

Below are a handful of tips for dating a vegan. Don't worry, I promise not to tell you to lay off the bacon.

Respect their boundaries, but hold true to your own. Hopefully, your vegan does not expect you to ditch meat, just like you don't expect them to start binging on burgers. That being said, dating a vegan may require a bit more compromising than you're used to. From simple things like choosing a restaurant, to bigger issues like whether or not they're comfortable with meat in the house, the lifestyle offers up complexities you will not encounter when dating another omnivore. Open up a line of communication and find a comfy middle ground you can both get behind -- separate pots and pans, anyone?

Keep an open mind. Many non-vegans have a skewed idea of what being vegan is actually about, which perhaps can be blamed on the more aggro activist side of the movement. Often, when people hear "vegan" they picture angry paint-slinging, forum-trolling types, and this just isn't the case for all. There are dozens of different kinds of vegans, from juice junkies, to philosophers, foodies, athletes, yoga bunnies and everything in between. Try and drop any pre-existing notions of what it means to be vegan, and follow the lead of your partner. Ask why they went vegan -- their response may surprise you.

Keep an open mouth. While no two people (or two vegans) are the same, it is safe to say that most vegans are pretty food-focused. If you search the #vegan hashtag on Instagram, you will find the feed littered with lunch shots. Now that you're dating a vegan, you can expect to be introduced to some vegan fare. Don't panic. Some plant-based fare may sound or look a bit foreign -- seitan, nutritional yeast, chlorella -- but good food is good food, period. Whether it's meaty or vegan or gluten-free, if a dish is prepared well, it will taste good. So give your partner's cooking a shot before you start mainlining deli meat when they're in the bathroom.

Get involved. Don't worry, I'm not going to tell you to go vegan, and hopefully, neither is your partner. That being said, if veganism is something they're hyper-passionate about, getting involved will show you care. Volunteer to check out a vegan food festival with them or go to a screening of Forks Over Knives.

Stay flexible. For many, the most difficult part of being vegan is the social aspect. Barbecues and dinners at friends can be awkward, and it can be hard to eat on the fly, so don't be surprised if your vegan is packing a package of hummus at all times. Since you're a pair now, this means you, too, will be impacted by the lifestyle, even if only peripherally. Stay flexible and try not to get too hangry as they survey menu options and grocery aisles in search of a vegan-friendly fix.

Do a little research. Before you take your vegan to a new restaurant or grab them something from the store, do your best to double check for vegan friendliness. From orange juice to condoms, there are a myriad of products out there that are surprisingly not vegan. While your vegan mate will most likely be up on their label reading, it's still nice to offer them something safely knowing it's vegan-friendly. This shows consideration and thoughtfulness. Ah, romance. 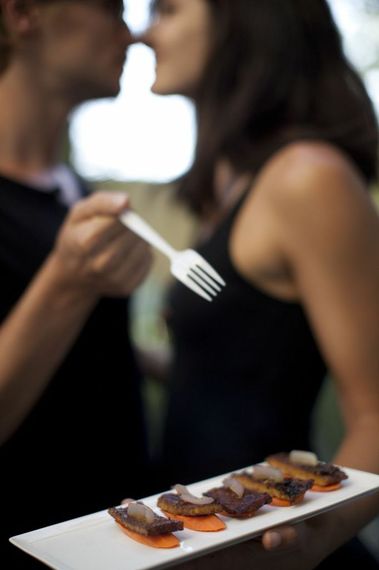 Dating a vegan isn't any more difficult than dating anyone else -- all it takes is an open mind, an open heart, and maybe a box or two of vegan condoms.

Zoe Eisenberg is the co-author of The Lusty Vegan, a Cookbook and Dating Manifesto for Vegans, and the People Who Love Them. Find her on www.ieatgrass.com and www.sexytofu.com.