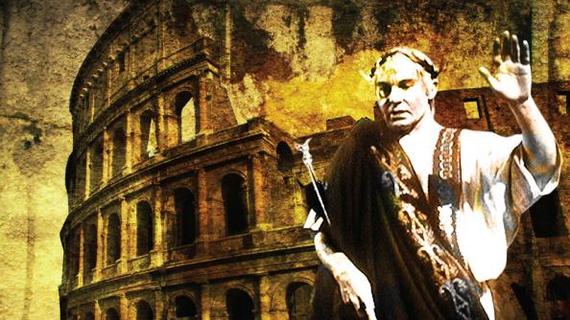 Not all who are here, at the diet clinic in Cannes, are what you would consider "serious" about changing their lifestyles in the Anglo-Saxon sense of the word. The French are very individualistic and hate to give up what they believe are their natural rights. Many start their comments with "moi" or me followed by "je" or I. As in: "Moi, I need my aperitif every evening." Or "Moi, I'm going to have my repas de Noel." Or "moi, I can never eat that processed crap." It is a constant declaration of independence said in a tone that betrays a certain pride -- as if keeping the "je" and the "moi" in things was a matter of honor. I, Claudius, must have my apéritif!

There are some colorful characters in the clinic even though they mostly look pissed off as if it is somehow the government's fault that they ended up fat and at the diet clinic. There are, also, a depressing number are returnees. Like it happens with inmates and prisons, many come back here on a routine basis. They don't provide statistics, but the relapse rate seems high. Far from being ashamed, like prison inmates who acquire respect for having spent more time inside, these professional yo-yo dieters walk like they own the place. We are in some diet version of "Orange is the New Black." They know the doctors, the nurses, and can get to sneak out an extra fruit or yogurt -- that's how close they are to the all-powerful kitchen staff.

They always have a reason for their relapse, of course. Omer, the woman from Benin, had her husband run away to his village with all her money. He was a prince in his village and had a bride waiting for him back home. Omer was left with no money and a bleeding uterus from a miscarriage. That was 20 some years ago, she's been eating herself to ease the pain since, ending up here for the third time in the past five years.

There are also those who have a less serious reason behind their relapses and provide comic relief. Alain is one of them. He is in his sixties, has lost seven kilos in eight weeks. Even though still morbidly obese by any standard, he now walks around like he is Alain Delon. It is funny how the rapid loss of weight makes us delusional. I've had my moments where I've lost two kilos of the thirty I needed to lose and felt like I was Giselle. It's something that needs to be constantly checked especially as old age creeps up. Alain, now Delon, is oblivious to this fine point of dieting delusion. I've watched him over the days. First he wore loose clothes, now he wears tight fitting colorful Lacoste shirts with a sports jacket worn with the signature playboy turning up of the collar. He wears Raybans that perhaps suited him when he first started his adventurous life in the sixties. And he has that white lock of hair blow-dried so it falls on the face a little, like a gamin, a little boyishly. He even winks a little each time you pass him by, something, I suppose, he picked up running that bar in Saigon back in the day.

"Moi, it's my seventh time here," he tells me as if it is something worthy of praise. Alain has had a fascinating life which he loves to brag about. He lived much of his adult life in southeast Asia and used to own 24 bars and restaurants in Vietnam and around the world. He is married to a younger looking Vietnamese lady with whom he has a teenage daughter besides his two much older children from his first wife. He likes to listen to deep purple to relax he tells everyone -- thinking that will make him sound young.

Alain and I talk about the foods we miss, we bond over our mutual Saudade for foie gras and sauternes. He completes the program tomorrow. In the group class which he largely dominates, he confidently declares that he will keep his diet when he leaves but only until Dec. 20. He explains, in that French matter of fact voice, with the signature slight turning up of the shoulders, "Moi, je dois avoir mon Noel. Moi, je dois avoir mon apéritif, mon verre du Scotch."

More:
healthy livinglifestyleweightlossHealthFrance
Newsletter Sign Up
The essential guide to taking care of your mind and body
Subscribe to HuffPost’s wellness email
Successfully Subscribed!
Wellness delivered to your inbox