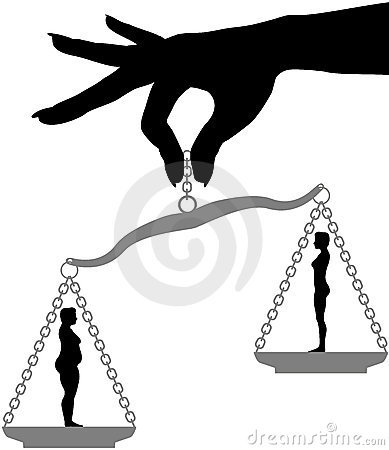 The diet clinic here in Cannes, France, is part of a small sized hospital. So they can perform all kinds of check-ups and treatments to help the patients in their recovery. Here, you witness socialized preventive medicine at its best. There is nothing fancy about it, the food is simple, the exercise machines are few and old, the medical equipment would have been retired fifteen years ago at an American institution. But they provide all the basics for the program to succeed. From doctors to dietitians and physiotherapist, all are here to help the patients.

Many of us overweight and obese folk, blaming ourselves for our predicament, ignore our health-- feeling we deserve punishment more than care. So this kind of program that helps you lose weight while you take care of other health issues is priceless because we, the dwellers on the extremity of the scale, have neglected ourselves for so long.

Sitting in the crowded radiology waiting room for my turn to come up, to Xray my knee, reading my book, I hear that tomorrow generalist doctors are striking. This strike, which is their second one in a few months, is because a new law is making supplemental insurers pay in advance for their clients' doctors so that the patients don't have to front the 20% or 30% not covered by the French state insurance. The doctors are unhappy because the burden of getting reimbursed, for the supplemental cost, by insurers falls on them. The law was passed to make healthcare available to those who don't have the money to pay the 20-30% up front. I wouldn't be here at this clinic, for example, if it weren't for my 'tiers payant' supplemental insurance, because I couldn't afford 20% of such a long stay. The debate is not on whether or not people should have supplemental insurance, but whether the patient or the doctor should be reimbursed by them.

I asked the man in front of me who had talked loudly about the strike, in almost a public way, like some Danton of the waiting room, why are the doctors striking? The tallish gentleman, in an old suit, a signature red alcoholic complexion around the nose and cheeks, and an old lockable briefcase, proceeded to enlighten me and everyone else in the room:

"It's the problem with the tiers payant," he answered, "they make is so cheap, it is going to crash in a few years-- the whole social security system, I tell you."

In situations where I sense a fascist argument about to unfold, and I've been in these situations from Texas to Cannes, from the hostage crisis to the immigrant crisis, I've become an expert at acting dumb just to engage in a Socratic questioning that may lead to the eventual conversion of the racist. It is really an arrogant stance, to think you can change a hardened Le Penist or a Texas bigot, but arrogance on the part of the hated minority is sometimes a tool of survival.

So, I ask him to explain how this new law works. He was an advisor to a minister once, he tells me, and knows that the situation is dire: the pharmacies are closing and doctors are impoverished because people abuse the system. I smiled inside knowing he was going to let it slip if I just held on a little more. "Excuse me, I don't understand, you mean the insurance companies are hurting the doctors because people abuse the system. But aren't the insurance companies private? and outside the system?" He looked at me, and without any hesitation said, " you know, the law wants to make the doctors fill all the forms, do everything, so this way it is easy for them to abuse the system. Do you know they are the ones who demand non-generic medication? The French are fine with generic but, nooo, not, them." I then ask, in my most clueless American accent, "Who is them?" Channeling Jean Seberg in Breathless, "Qu'est-ce que c'est, dégueulasse?"

"The foreigners, you know the mauvaises etrangers the bad foreigners. Nowhere, nowhere are foreigners this well covered. They pay nothing. They land here, and hop, they are covered."
I venture some information of my own trying hard to maintain the naiveté in my voice, "The Germans, don't they have the same kind of coverage for their folk?" He answers incorrectly, "oh, no, not like here, they don't give anything to the foreigners."

But I push on and try to keep my tone as non-combative and neutral as possible, "The Scandinavian countries-- don't they provide full coverage to all?"

At this comment, he raises his shoulders and blows out a loud pouffff, like only the French know how to do and says, "Oh, you can never compare France with Scandinavia, things are very different there."

By which, by now, I'm pretty sure, he means there are not quite as many Arabs in Scandinavia.
I smile and respond, " J'aime beaucoup les Scandinaves."

And get up, exchange a look with the hijab-wearing woman who had been sitting quietly in a wheelchair next to the man, and ask the secretary why they haven't called me yet.