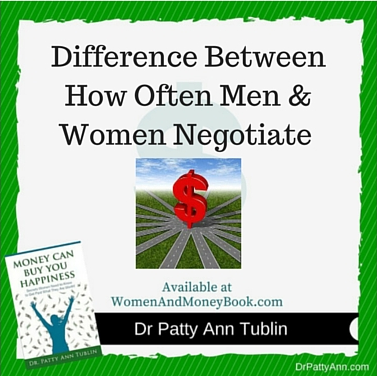 A study by Harvard Business Review revealed that when men and women do negotiate, men tend to negotiate twice as often as women. When men were asked when their most recent negotiation was, they responded, "Within roughly the past two weeks," while women responded to the same question by answering, "Within roughly the past four weeks." Furthermore, when it came to future negotiations, an article published in Harvard Business Review found that women predicted they would enter into them in approximately four weeks, while men responded by answering within only one week.

Differences Between The Manner in Which Men & Women Negotiate

While negotiating, men tend to be more aggressive. They utilize the competitive skills they learned in childhood and carry them forth into the workforce, resulting in a winner-take-all mentality.

Conversely, women are generally more reluctant to ask for a raise because they don't want to be seen as competitive, stepping "out of line," or risking behavior that might be interpreted as selfish, demanding, or not being a team player.

Double Standard for Women When Asking for a Raise

Unfortunately, women have reason to pause before asking for a raise. Research has consistently validated that women who ask for more or demand more within the workplace are often looked down upon, while men who do the same are applauded. (Psychologytoday.com)

This double standard must cease if we want to end the gender wage gap. We must allow more women to come forward with confidence to advocate for more responsibility, to gain access to the decision-makers, and to negotiate what they deserve to be paid.

While being cognizant of all the pitfalls and dangers previously discussed in this book, women must remember that "Forewarned is forearmed."

The above blog is an excerpt taken from my Amazon Best Selling book: "Money Can Buy You Happiness: Secrets Women Need to Know to Get Paid What They Are Worth!" To order this book click here: www.womenandmoneybook.com