Sometimes a food can be so familiar and a complete mystery at the same time. We hear the name on the daily and we've eaten it since childhood, but when we stop to think about it, we don't have any clue what the food is made of. The classic example, of course, is hot dogs. We eat them all the time, but do we really know what they are and how they're made? (If you really want to know, watch this at your own risk.) While certain foods are better kept a mystery, others aren't as freaky as say, Slim Jims.

Two foods some of us here at HuffPost Taste grew up around but can't quite distinguish are corned beef and pastrami. We know we've eaten them on sandwiches with our grandfathers, we know we've seen them on countless deli menus and we know we like both. Besides the fact that we know corned beef is eaten on St. Patrick's Day, we realized we couldn't describe the differences. After much deliberation and daydreaming, we figured it out. Here's what you need to know about corned beef and pastrami.

They both come from cows, but they are different cuts of beef. They're also cooked and eaten differently.

Corned beef is typically brisket. While pastrami can also be brisket, it comes from the navel, which is the cut next to the brisket, closer to the belly. "Navel is particularly fatty and stands up well to the long cooking to come," says Serious Eats. 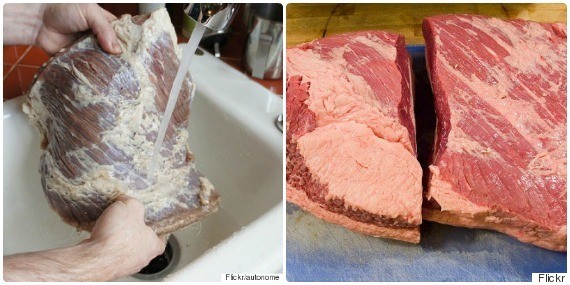 Both cuts of beef are cured, which means they've been brined in a salt water solution. The brine may or may not include spices and seasoning. The cooking process differs after the curing. Corned beef is boiled while pastrami is smoked. Pastrami may also be rubbed with spices again before the smoking process. 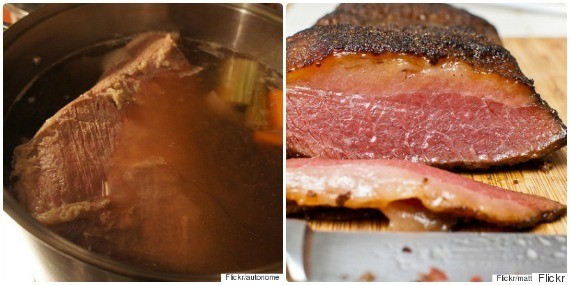 Once the meats have been cured and cooked, they're ready to eat. Traditionally you eat corned beef on a reuben, or with cabbage on St. Patrick's Day (and whenever the hell you want). Pastrami can be eaten on a sandwich, preferably on rye with mustard, preferably from Katz's Delicatessen in New York City. 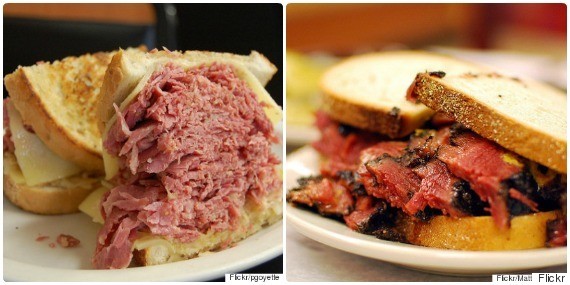 Pastrami Sandwiches For The Ages