On January 26, 1974, a group of dancers who had appeared in Broadway shows met at the Nikolaus Exercise Center where, at the invitation of Michon Peacock and Tony Stevens, they were encouraged to discuss what had launched them on their path to becoming a professional dancer and share some of their personal stories with the group. Among those present was choreographer Michael Bennett who, together with Nicholas Dante and James Kirkwood, Jr., would become a critical creative force in the shaping and molding of A Chorus Line.

Since its world premiere at the Public Theater on April 15, 1975 (and its subsequent transfer to Broadway's Shubert Theatre on July 25, 1975), A Chorus Line has become a landmark of musical theatre, winning nine Tony Awards as well as the 1976 Pulitzer Prize for Drama.

While Broadway audiences were accustomed to seeing dancers onstage, they rarely had any knowledge of the person behind a performer's head shot. What A Chorus Line did so beautifully was to showcase the professional development, artistic struggles, dashed hopes, and emotional baggage each dancer brought to an audition.

In the course of introducing the audience to a character who was more interesting and had much greater depth than a flashy costume, A Chorus Line set a new standard for researching a character's backstory and humanizing the anonymous dancers who appeared on musical stages. Its success was so brilliant that in 2012, when Australia's Twisted Broadway performed a gender-bender version of "At The Ballet," it brought down the house.

Two recent world premieres by small Bay area theater companies drew the audience's attention to their characters' backstories. One showed how a group of office workers tried to keep a stiff upper lip while coping with personal stressors and confusing changes in the local environment. The other was focused on an old fool trying to free himself from long-held secrets that no longer had the power to bring him shame or ruin.

For the past 25 years, Charlie Varon has been charming Bay area audiences with his character-rich monologues and an occasional duet with a professional soulmate. His pieces usually get workshopped at The Marsh before embarking on formal runs in San Francisco, Berkeley, and other environs. In March of 2009, Varon debuted Rabbi Sam, a complex piece in which he impersonated various board members of a fictional Bay area temple.

In 2014's Feisty Old Jew, Varon introduced audiences to 83-year-old Bernie Schein, a former commodities broker who grew up in Brooklyn but never graduated from high school. An aggressive, manipulative gantseh macher with an endless supply of chutzpah, Bernie discovered that he had unwillingly graduated from being a real "somebody" to becoming an elderly 'nobody."

Inspired by his friendship with Mort Max, Varon's latest work, Second Time Around: A Duet for Cello and Storyteller, finds him sharing the stage with cellist Joan Jeanrenaud (who spent 20 years with the Kronos Quartet) as he delves into the self-inflicted anguish, misguided thinking, and social clumsiness of another resident at an assisted living facility: 92-year-old Ben Rosenau.

Rosenau has been asked by his friend, Selma, to perform a mitzvah by letting their friend Adele's grandson interview him for a school history project. Although Ben describes the boy's grandmother as the kind of woman who can effortlessly drag someone into her sense of personal despair, he has been warned that Adele's worries are somewhat justified. Her grandson, Seth, is notably lacking in social skills and (at least according to his mother) locks himself in his bedroom every evening so he can play video games all night long.

While Ben ponders whether he should give Seth tips on how to be a man, he can't ignore the fact that his body is failing him. In addition to the various aches and pains that are common to someone his age, Ben's hearing has become more unreliable, his mind is not as sharp as he would like it to be, and his body has developed a devilish talent for sabotaging his musings with a nap.

Ben is also living in a bit of a time warp. He still thrills to the sound of Winston Churchill's voice and can vividly recall the panic he felt on his first mission as a bomber pilot in World War II. As he watches Seth struggling to get a digital camera to start recording, Ben wonders whether he should tell Adele's grandson the secret that has haunted him for nearly 70 years. 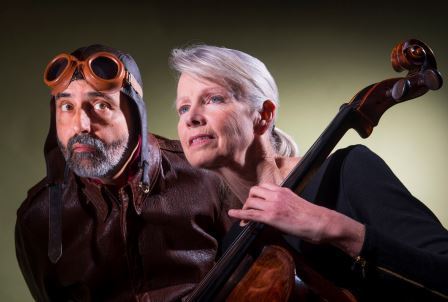 Actor Charlie Varon and cellist Joan Jeanrenaud appear in
Second Time Around: A Duet for Cello and Storyteller
(Photo by: David Allen)

Who else can he tell? For years, Ben has been estranged from his son, Danny (an Israeli activist living in an illegal settlement in the West Bank). He doubts he'll have a chance to visit with his grandchildren before he dies. And Ben can't help but wonder why Selma held his hands in hers while looking so deeply into his eyes.

Working with Varon's long-time collaborator, Dave Ford, Charlie and Joan have woven music into what would have normally been a 70-minute monologue. Jeanrenaud's score often acts as a sober counterpart to Varon's characterizations; her solos allowing him time to grab a sip of water without ever feeling that he is putting his audience on hold.

In key moments of the show (such as when Ben starts to have an anxiety attack from the stress of recalling his wartime adventures), Jeanrenaud's work on the cello conveys something which words cannot express quite so easily. As Varon notes:

"Music can go places that words cannot. The cello is a great instrument for expressing inner life. The scale of the cello allows me to scale up my performance and do line readings that would otherwise sound mannered or forced -- and there's rhythmic stuff that the cello opens up for me. It's an instrument that can take us deeper than words alone. That has been the most exquisite part about working with Joan." 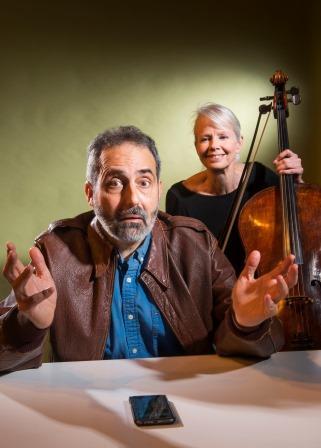 Actor Charlie Varon and cellist Joan Jeanrenaud appear in
Second Time Around: A Duet for Cello and Storyteller
(Photo by: David Allen)

Second Time Around: A Duet For Cello and Storyteller provides a beautiful showcase for another one of Varon's eccentric alter kockers (rest assured there's lots more inspiration in assisted living facilities that has yet to be tapped). The addition of a musical element allows this gifted artist to breathe more life and greater depth into his storytelling. Those familiar with Varon's work will be thrilled by this new, added dimension to his art. Those who are discovering Varon for the first time are in for a genuine multigenerational treat.

The Marin Theatre Company recently presented the world premiere of Swimmers (a new play by Rachel Bonds upon which the company also bestowed its 2015 Sky Cooper New American Play Prize). Set in an office building in an area of suburban sprawl where coyote sightings have become increasingly frequent, the action begins early in the workday in the building's basement and, through a series of interlocking vignettes, works its way up (floor by floor) to the roof after business hours have ended. 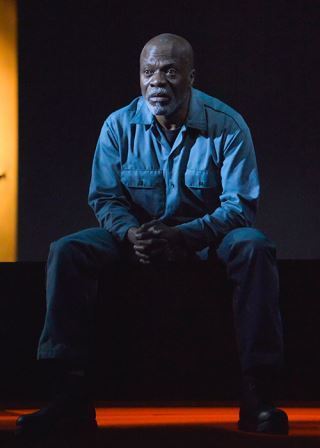 L. Peter Callender as the janitor, Walter, in Swimmers
(Photo by: Kevin Berne)

The unsung heroes of this production are set designer Dane Laffrey and lighting designer Kurt Landisman, who have conspired to adapt what seems like a low-ceilinged, claustrophobic unit set from one floor to another by wheeling in desks, chairs, sinks, microwave ovens, and other office equipment for each vignette. The end result is that each floor plan in an architecturally sterile environment (whose fluorescent ceiling lights are merciless) seems like a microcosm of crushed dreams and lives spinning out of control.

Over the course of the evening, the audience meets: 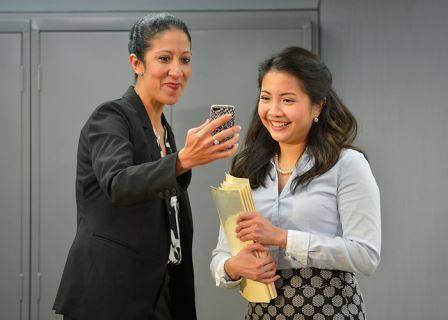 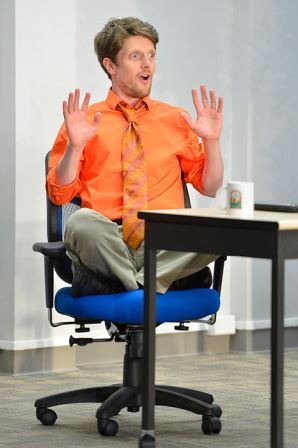 Randy (Max Rozenak) is worried about coyotes and
billboards with ominous messages in Swimmers
(Photo by: Kevin Berne) 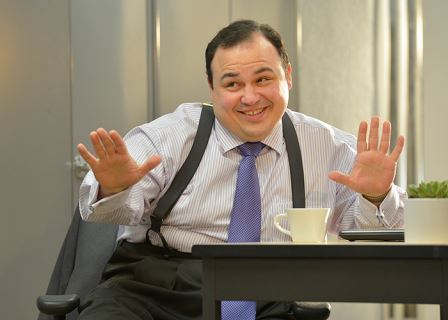 Dennis (Adam Adrianopoulos) is the office's fat man who
likes to make jokes in Swimmers (Photo by: Kevin Berne) 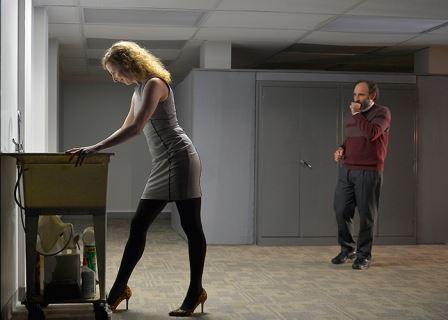 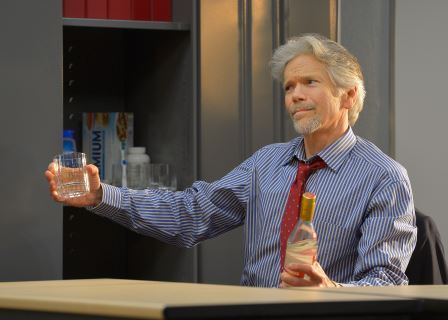 As directed by Mike Donahue (and enhanced by Theodore J. H. Hulsker's sound design), Swimmers is populated with easily recognizable (and often dysfunctional) characters who could be found in the offices of any large corporation. While their repressed hopes and quirky behavior may seem like standard material for a character's backstory, Marin Theatre Company's artistic director, Jasson Minadakis, finds something much more poignant in this script.

"Rachel has created a contemporary American fugue of loneliness, connection, and hope with her detailed, very human characters who ache and struggle to get through the day at their suburban sprawl office park. Part of the genius of Swimmers is its scope. It's an 11-character play that moves up nine stories of an office building over the course of one day. It's a huge tapestry for a play while also being extremely intimate. The play is really a composition of nine small plays existing within an overarching story. Each ripples out, connects to the others, shares characters and themes, and then quietly comes to an end. Rachel has an ear for the sweet melancholy notes of loneliness. She also has a gift for bending those notes to create gentle affection and empathy that lifts and releases in a way that can only be called grace." 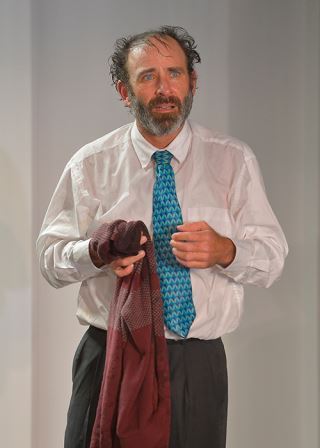 Brian Herndon is Yuri in Swimmers (Photo by: Kevin Berne)