Open up almost any form of media -- online or print -- and you've likely heard how Millennials and their younger brethren Generation Z are addicted to technology. In fact, these young adults are even referred to as digital natives for their obsessive connection to smartphones and Snapchat, Instagram, and Facebook.

For sure, parents are frustrated with their kids whose face is usually fixed to some sort of screen. Plenty of teachers have fretted about how kids can't learn anything when they're sneaking peeks at their phones during their class. Young people "are interacting all day but almost entirely through a screen," reports the TIME Magazine.

They aren't wrong. According to one study, 86 percent of those 18-29 have a smartphone. Nine out of ten younger millennials (ages 18 to 24) check their phones at least once an hour, if not "constantly." Ninety-seven (97) percent look at their phone within three hours of waking up and check their phones 74 times per day.

But when you compare technology use among young people and middle-aged people, you discover something that, in hindsight, should seem pretty obvious -- at least to working parents:

Whenever you read or hear something about teenagers' obsession with Snapchat, remember to compare it to adult email addiction. Over 50 percent of employees check their company email over the weekend and before or after work. Nearly 60 percent of adults check their work email while on vacation, and 6 percent have checked their email while a spouse is in labor. Another 6 percent have checked email at a funeral, and 10 percent at a child's school event.

The findings of a Nielsen survey about which age groups are most distracted by technology during mealtimes reveals a very different portrait than the one painted in the media: 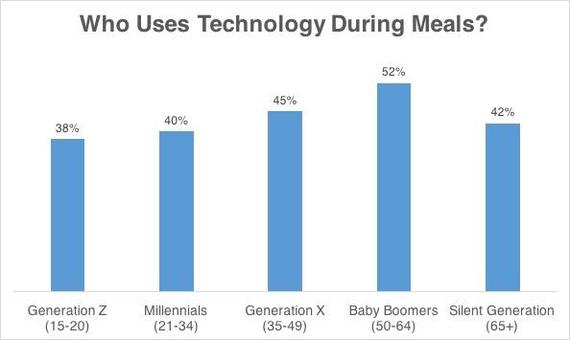 Contrary to their technology-obsessed image, teenagers led the way in terms of tech-free meals, followed by Millennials. The survey results are a pretty remarkable repudiation of young people's reputation as reliant on screens and technology.

To say that American adults are always connected would be an understatement.

Adults could defend themselves by pointing out that checking email is often a job responsibility and criticize young people's micro-interactions on Facebook, Instagram, and Snapchat as shallow connections that lack the depth of face-to-face conversations. But the fact is that adults who check their email constantly may be searching for an illusion of productivity -- a quick fix of feeling productive and important that pales in comparison to 90 minutes of focused work.

Ian Bogost, a researcher at the Georgia Institute of Technology, in The Atlantic notes that people often turn to work email so they can feel productive:


Email pruning doesn't enact work so much as it simulates work: It's a ritual -- like a secular, corporate rosary -- which we perform in the hopes that it will somehow help us leave the domain of ineffectual work and re-enter the domain of gratifying productivity.

This inclination to reach for our phones and fill empty moments with work emails is part of a world in which the average person spends -- according to a report released last year by Informate, an intelligence firm that studies consumers' mobile behavior -- 4.7 hours per day on his or her phone.

Informate found that people aged 25 to 54 spent more time on their phones than teenagers. "While social networking may have started as a viral craze for U.S. teenagers," the CEO of Informate has said. "It's steadily matured into an everyday lifestyle for many adults around the world who are now eclipsing teens and young adults as most-frequent users." According to this report, at least, adults use their phones more than teens.

The fact that adults can feel overwhelmed by being "always plugged in" is well documented. It's just that when people talk about adults' smartphone fixation, they describe it as a problem that affects everyone. In truth, adults may be calling the kettle black. Yes, technology is second nature to Millennials and Generation Z. They really are digital natives. It's not an affliction. It's a fact -- they have never known a world without personal computers and the Internet. Technology became their primary mode of communication. Baby Boomers and older Generation Xers on the other hand are foreigners in this new digital landscape and technology is a second language at best. But that doesn't mean Baby Boomers aren't obsessed with it.