Architects Michael Hansmeyer and Benjamin Dillenburger have pulled off a three-dimensional printing feat to rival them all. As part of the project "Digital Grotesque," the duo 3D printed an entire room, creating a 16-square-meter cube adorned with unbelievable ornamentation that looks like it belongs in a futuristic cathedral.

"We aim to create an architecture that defies classification and reductionism," states the group's website. "Digital Grotesque is between chaos and order, both natural and the artificial, neither foreign nor familiar. Any references to nature or existing styles are not integrated into the design process, but are evoked only as associations in the eye of the beholder."

Watch the video above to see how Hansmeyer and Dillenburger used carefully plotted algorithms to create a building, but not necessarily a dwelling, as Mr. Heidegger might say. The prospects of 3D printing are looking pretty grand, no? 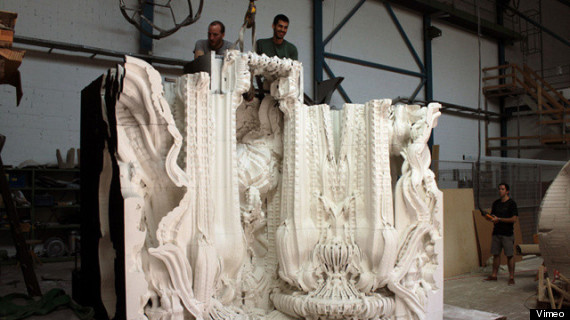