This is the sixth in a series on born digital literature: 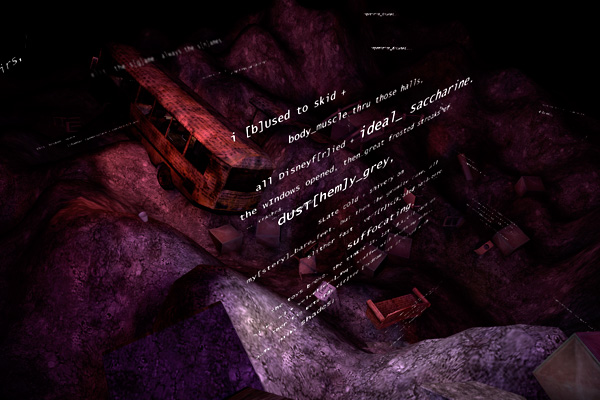 Media, like language, are processes through which information is stored, accessed and presented in certain ways to the relative exclusion (mastery) of others. They, like language, can be thought of framing apparatuses that act to organize or "territorialize" the infinite data of experience into (relatively) discrete spaces and loci. Thus, when text encounters a new media, novel possibilities for use are opened up. An early 20th century example is D..J. Enright's poem which employs typos and keyboard symbols to disrupt the visual integrity of words and expand meaning.

Four years earlier, the artist Marcel Duchamp wrote a poem that replaced the definite article "the" with a star and uncoupled adjectives and adverbs from nouns and verbs, thus revealing the relational as opposed to definitive nature of language. 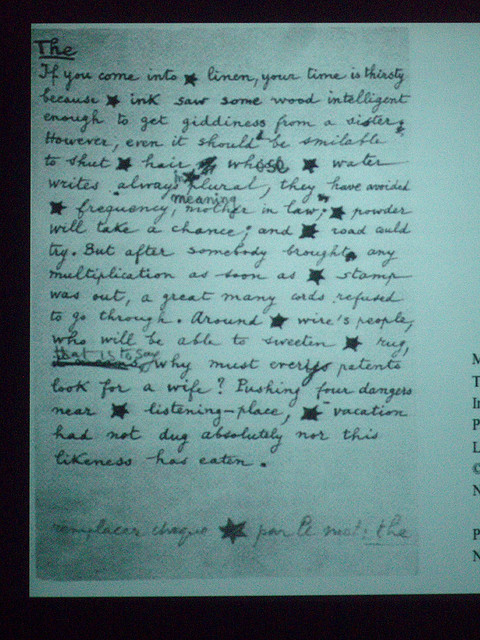 This poem, like the inscriptions on his "readymades," was one of many attempts, "not to find an extra way to make language refer to the world outside it, but to subvert the process of linguistic representation and enclose language inside a space where it made no connection with external objects."

The paradox that Duchamp returned to again and again is that, without reference to a shared world, the speaker is effectively imprisoned in a personal interior that does not communicate with the outside. But, even conventional language incarcerates. By defining the world, it forecloses how we see and experience it. Duchamp's solution to this conundrum was to use his art to playfully "re-frame" everyday objects and experience. An example of this is the door that Duchamp had constructed in his apartment -- rather than dividing an interior into discrete spaces, it opens one room as it closes another thereby creating a hybrid, communicating space out of ones which were previously separate. 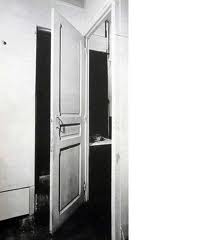 A more recent exploration of media, language and topography is "Dead Tower," a wonderful collaborative piece by poet Mez Breeze and digital artist Andy Campbell. Andy, whose "Dreaming Methods" website is a treasure-trove of his own multimedia work and collaborations with writers and poets, invited Mez to: "...create an explorable, rugged landscape littered with digital text 'sculptures' and bizarre objects left around a huge abandoned tower."

In "Dead Tower," the user wanders in the dark trying to make sense of the space. There are few clues and no narrative save for the trope of being lost and needing to find a way out. Along the way, one encounters fragments of text which, because they have computer code embedded in them, serve as labyrinths, both providing a structure and direction to the experience while, at the same time, complicating it. 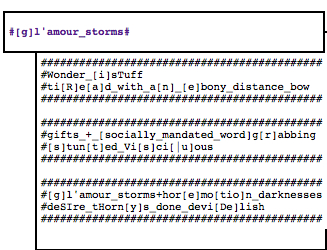 Mez's poetry is "codework" which, according to poet Alan Sondheim is "the computer stirring into the text, and the text stirring the computer... a literary avant-garde concerned with the intermingling of human and machine." Practitioners include Talan Memmott, Ted Warnell, John Cayley, and others.

Mez dubs her work "mezangelle." For her:

To mezangelle means to take poetic phrases and alter them in such a way as to extend and enhance meaning beyond the predicted or the expected. It is similar to making "plain" text hypertextual via the arrangement and expansion of words via the insertion of symbolic/actual computer code. Mezangelle attempts to rewrite traditional poetry conventions through layered meanings that are both structurally and symbolically embedded in each work.

I asked Andy, who designed the interactive interface for "Dead Tower," if he thinks that the use of new media alters how we read and write.

I think both writing and reading have to be approached very differently with this kind of work. There is often little or no long-form immersion generated by the text because it's too broken up or reliant on user interactivity to trigger that. But there is a different type of immersion going on and the text itself, the written word, plays an extremely important part. Text has made some new friends in the form of other types of digital media and has to learn to co-exist with them to tell the 'story' and/or generate the experience. This means writing in the traditional sense doesn't work so well anymore. It has to be done either with the other media in mind or literally written -- what I call 'stitched' -- into the other media itself -- which is how I work a lot of the time when I'm not collaborating. I write prose directly into code editors, into Photoshop, or into whatever I'm building the work in. I write in reaction, as it were, to the other media I can see or hear on-screen.

Unlike some codework, the code in mezangelle is nonoperative. I asked Mez about using code to disrupt the usual flow of language, creating mis-sense and nonsense:

I'm not sure my manifest aim is to 'use computer language to disrupt human language.' I do understand why mezangelle would be considered 'disruptive,' though for me that term is now unfortunately relegated to the cringe-worthy basket since its adoption by the startup community. My 'decision' to create the polysemic system termed mezangelle initially evolved from immersion in email exchanges, computer programming languages and chat-oriented software [ie y-talk, webchat, and irc]. Strangely enough, I see less nonsense and much more sense in all of my creative practice -- and construct each piece with sense in mind, rather than randomized nonsense. Just because a work is designed to be read/absorbed from multiple viewpoints [as poetry, as code, as ascii or as purely symbolic detritus] this does not mean that all it offers is nonsense. Each piece is created through a finely-honed framework that is orchestrated from the very beginning: this 'conceptual housing' acts to dictate both the form and content of a piece, down to the last incremental detail. I also empathize with a certain section of a general readership base that could find my works difficult. Extracting meaning from layered work takes time, concentration, an appreciation of whimsy and lateral interpretation skills.

Like many Dreaming Method pieces, "The Dead Tower," has a videogame feel. I asked Andy about this. I wondered if he, as an artist who employs multiple media, considers his work a form of literature.

When I was in my teens I created and sold computer games for the Commodore Amiga, so I have a background in game-making. Most of my games were praised for having atmospheric graphics and a sense of immersive play, although obviously compared to today's standards the graphics were pretty terrible. I was very much into writing back then as well, and would sometimes release games with accompanying short stories or novellas. The natural next step for me was to try to combine these interests, which is where Dreaming Methods comes from.

I think of all my work as having a literary quality because it has writing in it. The text isn't generally dominant, but it is an essential component. 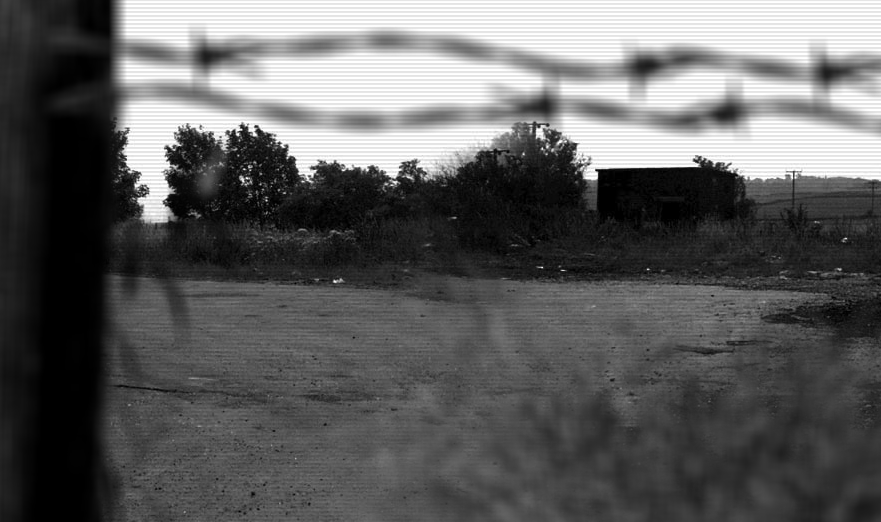 I wondered if he thought about how quickly the reader accesses the text in the same way a filmmaker or game-designer might contemplate pacing in a film or game.

Generally, I tend to think of my projects as being comprised of 'scenes' that are all interconnected, with each 'scene' being a moment frozen in time that can be panned around and examined in high detail. When the reader/player decides to move on, or finds the way out of that 'scene', I sometimes use video sequences to give a sense of shifting from one frozen time-capsule to another. Like a vehicle.

I used cinematic editing techniques in 'Capped' and 'The Flat' which are both a mix of frozen and timed 'scenes'. The previously mentioned 'Duel' project I'm working on with Kate Pullinger involves a long sequence that was literally edited together on a movie timeline. In that project, the pace of the writing is juxtaposed against the pace of the film footage, so you literally have to read to keep up, or you'll get left behind.

The pace of the work is changing as I move more into 3D game-like territory. My latest work 'Zone' for instance, a collaboration with David Jhave Johnston, is comprised of one huge, sprawling 'scene' - a 3D landscape of varied terrain, objects, buildings, weather effects and invisible narrative triggers. The pacing in that work changes depending on where the reader/player decides to wander; 3D sounds give a sense of increased urgency or dread; and there are locations situated in confined spaces, where movement feels sharper and text narratives arrive on-screen more intensely.

Gaming and code are traditionally male-centric domains. I asked Mez if she thought of her work as subversive not only on the level of altering the expected norms of language, but also as a woman working with code.

I do so love to recreate/manipulate standardized protocols and conventions, and all my works have [at their core] a definitive social commentary function. Each work is reactive to [and evolves alongside] online information streams. When creating in Mezangelle, my aim is to encourage continued exploration via technology through curiosity, play and repeated questioning/collapsing of institutionalized concepts including the very fabric of established male-centric discourse. Of course, with curiosity and play being strong markers of mine, I do think of my works as both "-ist" [feminist, humanist, gender-neutral-ist;] and subversive.
There are other talented gals producing codework: Two great peers of mine working with code at a creative level are Nancy Mauro-Flude [who's otherwise known as sister0] and JR Carpenter.

Correction: An earlier version of this post misspelled John Cayley's last name. It has since been corrected.