After two and a half years of planning, the Digital Public Library of America (DPLA), the U.S.'s first public online-only library, opened its doors today -- or at least was made publicly available on the Internet.

The DPLA is a free, open-source resource that makes a number of digital collections and archives across the country available in one place. It launched as a series of partnerships with the Smithsonian, the National Archives, New York Public Library, the University of Virginia, Harvard, Digital Library of Georgia, Minnesota Digital Library, Mountain West Digital Library and others. All of the text, photos, videos and audio contained in the DPLA can be searched, or browsed by place or time on the DPLA website.

Executive director Dan Cohen told The Huffington Post that the digital library currently contains more than two million items "with tens of millions to come in the years ahead."

Cohen outlined in a blog post introducing DPLA the goals for the digital library: to be an easy-to-use portal of digital collections, to be a sophisticated technical platform that can be built on top of, and to be an innovative institution that will advocate for reading and research in the 21st century.

The Berkman Center for Internet and Society at Harvard initiated the project, according to NPR, but it rapidly became a much larger collaboration between numerous libraries and digital archives.

The DPLA's original mission statement, according to Harvard University librarian Robert Darnton, was as follows: “An open, distributed network of comprehensive online resources that would draw on the nation’s living heritage from libraries, universities, archives, and museums in order to educate, inform, and empower everyone in the current and future generations.”

Among those involved with the project early on was University of Virginia Director of Digital Curation Services Bradley Daigle.

“It’s open source, and the organization is very conscious of not locking it down commercially in any way,” Daigle told a writer blogging on behalf of the Library. “I think the public aspect is going to keep this going and make it very useful for scholars and individuals.”

Nate Hill, assistant director of the Chattanooga Public Library, is also enthusiastic about DPLA. He has been involved with it since its early planning stages.

Hill said of the initiative: "The access to existing knowledge that the DPLA provides, the staggeringly broad path for future content contributions and development, and it’s open framework for third party application developers successfully forces one to completely rethink what a library can be in the age of the internet."

The DPLA will surface rarities to the American public, such as a 1919 home movie of an African-American backyard baseball game (screenshot below), Cohen told The Atlantic. 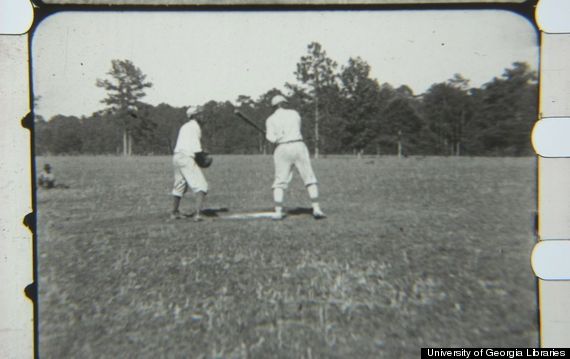 "So it's that kind of stuff that, really, generally doesn't see the light of day, that visitors to DPLA will be able to see for the first time," Cohen he said.

At launch, special online exhibits include A History of Survivance: 19th c. Upper Midwest Native American Resources, This Land Is Your Land: Parks and Public Spaces, a 1514 manuscript of The Book of Hours, daguerreotypes of Abraham Lincoln and George Washington, and works by Thomas Jefferson, The Verge reports. A selection of census, vital and Civil War era records were also found in some initial searches.

Celebrations of the launch, scheduled to be held at the Boston Public Library today and tomorrow, have been postponed, out of respect for victims of the Boston Marathon bombing on Monday.

Click over to DPLA to explore the digital archives.