How many of your friends' cell phone numbers do you have memorized?

Can you rattle off at least three? Two? Maybe one?

A few weeks ago, I was heading to my car after leaving an event and my phone died. Problematic on many levels. I was late to a dinner and was planning on using my phone to:

My immediate thought was to stop by a pay phone. I could phone for help! Great plan.

Although... turns out there were too many problems with that solution. Where was the nearest pay phone? Assuming I could find one, how would I use it? I no longer really carry any quarters on me. If they're not equipped to read plastic I was likely out of luck. And even if I were to find one and did have the requisite change, I don't have any of my friends' numbers memorized. Who would I call?

OK, not a great plan.

Digital connection fosters human connection. To the point where it sometimes becomes difficult to have the latter without the former enabling it. That's a pretty profound place for us, a society of social connectors, to be in.

We've heard about the phenomena of our unnatural reliance on digital. This is no longer the case. Referring to digital dependency as an unnatural dependency is a farce. Being glued to our digital devices and smartphones is one of the most natural learned behaviors of this past decade.

But is it to our detriment or our advantage?

Our lives are dynamic and we rely on our devices as much as we rely on some other physical aides to our person to ensure we're fully alert, cognizant and coordinated. Ready to respond and course correct depending on the latest sound bite to hit our screens.

Our phones have to be charged because events, gatherings, meetings, plans -- life -- are all constantly being made, updated, finalized, changed. The beat goes on at a pace that differs more often by the minute and hour than by the day or week.

We've curated an expectation to get updates. It's no wonder our lives hinge on battery life! When the battery dies our life operation is jilted. For some, it's on break. For others, it's closed for business.

So what is the optimal solution?

Maybe it's an easy solve -- buy more phone chargers, ensure that one of those is a car charger, create charging stations everywhere. Charge baby charge. Or maybe it's a more intuitive appreciation of our natural dependency on digital. And a realization of the implications of that on how we connect. Both physically and digitally.

Let's just confront the true nature of our digital circumstance: It's become a survival tool for many of us because many of us have made it into just that. We cannot survive without it. We know our phones are one stop shops. Which is probably why so many of us rely on them so exclusively -- they've become a basic amenity.

The smartphone is the nexus of ultimate transportation -- to websites, email, search portals and virtually any app that can function as a gateway to answers.

In The Net, a movie that came out in 1995 and carries themes well before its time, Sandra Bullock's identity is stolen. Her digital matrix was her reality, a faulty crutch that allowed her to lead a pretty insulated life. This proves detrimental as she's ultimately faced with unwinding the digital anonymity that she's cloaked herself in over the years in order to take back her life and survive.

OK, so it's Hollywood and a pretty extreme example. But it's an interesting case study to consider against our actual current digital reality.

In the digital construct of 2014, the spinner tilts the other way -- our reliance on digital doesn't make us anonymous, rather it propagates our public persona. Our identities are fairly well established (through Google, YouTube, Facebook, Twitter, Instagram, Pinterest, Linkedin, Blog Sites), many of us have 500+ online friends who can vouch for our identities, and documentation exists for everything -- pinnacle life moments, trivial life moments and all the other life moments in between.

Yet the tension still exists between the physical and digital planes.

How might we plot the relationship between digital and physical... it's not linear. It can't be. Our physical behavior and digital behavior are in constant flux and not perfectly positively or negatively correlated. At times one occurs more frequently than the other, sometimes they're in sync, oftentimes one might fuel the other to a varying and divergent degree, i.e. an introduction prompts a friend request or an incoming post leads to a congratulatory hug.

It's likely closer to a scatter plot. And at these points of collision, we aren't always really together together. Physically together yes, but mentally and emotionally together?

Not always. If we define being physically present as being completely attuned to the situation and wholly absorbed in the physical moment, we don't always have the best collective track record.

Playing with a daughter -- uploading pictures of her dancing.
Eating a decadent cake -- tweeting about its perfection.
Watching The Voice -- commenting on a friend's reaction.

We are playing, eating, watching, conversing, nodding, reading, laughing... all the while uploading, tweeting, commenting, liking, sharing, checking, responding -- whoa! -- if you think about it we are actually supremely engaged in that physical-meets-digital moment.

That is one of the reasons 'Appointment TV' has actually become a premium advertising buy (think Super Bowl), not only because of the high audience reach -- huge critical mass of people physically watching during that high impact window of time -- but because of the potential of high digital engagement - those same people digitally conversing about a brand, thereby amplifying its reach and organically embedding and stretching it into the prolific online social consumer discourse.

The unfortunate inflection is when our digital presence leads to physical absence. That's when the scatter plot might morph into more of a single horizontal line (or vertical depending on how we define the dependent variable) -- when our attention to digital, regardless of intensity, inhibits us from being truly and authentically physically present.

So what's the solve?

Well like everything in life, we can choose the degree of engagement.

I don't think digital is the villain. How can it be if we're the ones writing the script?

If the story is ours to define, the question might be how much of a lead role are we willing to give digital in our narrative? 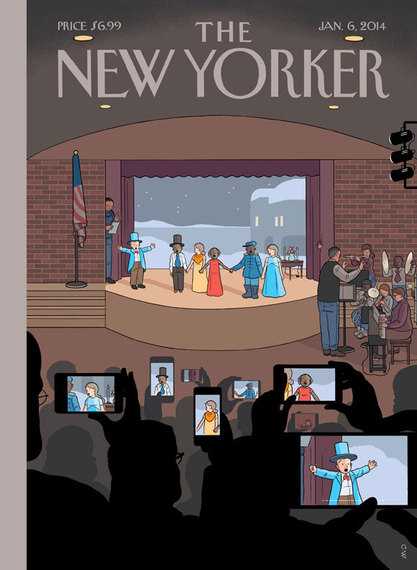 Shruti received her MBA from Harvard Business School and a BA degree in Economics from Harvard College. She currently works at General Mills in Consumer Insights, having held previous positions at PBS, CBS News, & Merrill Lynch and was a feature writer, editor and on the Board of Directors of The Harbus.

Need A Father's Day Gift Idea? These Are The Best Ones For Dad