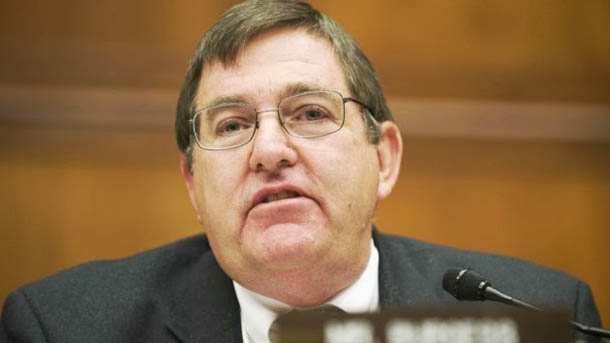 Michael Burgess is fighting for the right of all Americans to spend more on light bulbs.

For the second year in a row, Texas Republican Michael Burgess has tacked an amendment on the House energy and water spending bill that withholds funding for the Department of Energy to enforce new light bulb efficiency standards.

Why? Burgess, a tireless crusader against what he considers a blatant example of Big Brotherism, has cited a number of reasons since the standards were enacted as part of the bipartisan Energy Independence and Security Act of 2007. One of his top complaints: The standards ban the sale of traditional 100-watt, 60-watt, and 45-watt incandescent bulbs, which are cheaper than newer, more efficient compact fluorescent (CFL) and light-emitting diode (LED) bulbs. He says the standards "take away consumer choice."

"If the new energy-efficient light bulbs save money, and they're better for the environment, we should trust our constituents to make the choice on their own toward these bulbs," he said on Wednesday during a brief House floor debate on his amendment. "Let the market decide."

Given that the 130-year-old, Edison-era incandescent used less than 10 percent of the power it consumed to generate light, it was about time for an upgrade, no?

Likewise, Burgess got it wrong on cost. Yes, it is still cheaper to buy a traditional incandescent bulb than new, more efficient halogen incandescent, CFL or LED bulbs, even though their retail prices have dropped dramatically in recent years and are expected to continue to do so. Regardless, the cost to power the traditional bulb makes it the most expensive choice.

A Natural Resources Defense Council (NRDC) consumer guide compared the total cost of a 50-cent, 100-watt traditional incandescent with a comparable $1.50, 72-watt halogen incandescent bulb. The group calculated that over the one-year life of each bulb, it would cost $12.05 to power the traditional bulb for three hours a day, for a total cost of $12.55, while it would cost $8.67 to power the halogen bulb for the same amount of time, for a total cost of $10.17. Over a six-year period, if the price for the bulbs stayed the same, a consumer would save $14.28.

That isn't dramatic, but consumers still have choice to buy an incandescent bulb, satisfying Burgess's complaint. NRDC found that the savings are much more pronounced when it comes to CFLs. A $3.00, 23-watt CFL, which is comparable to a traditional 100-watt incandescent, is rated to last six years at three hours a day. The cost to power it for six years would be $16.62, making its total cost $19.62 -- $55 less than the traditional incandescent bulb.

Given that lighting is responsible for as much as 15 percent of a home's energy costs, the savings from replacing traditional bulbs with more efficient ones adds up. According to 2011 U.S. Energy Information Administration data, the average U.S. household spends approximately $190 annually on electricity for lighting. Based on the national average electricity rate in 2012, the Union of Concerned Scientists (UCS) calculated that burning 10 traditional 60-watt bulbs for eight hours every day would cost just about that much. Switching those 10 traditional bulbs to comparable 15-watt CFLs would cut the annual lighting cost to about $48 a year. Screwing in comparable 7-watt LED bulbs, meanwhile, would slash the annual lighting cost to only $22. (For more UCS tips on how to cut lighting expenses, click here.)

Multiply those savings by 114.8 million households, and now we're talking real money. Nationwide, the new light bulb standards could save consumers $6 billion a year by 2015, according to Kathleen Hogan, the Department of Energy's deputy assistant secretary for energy efficiency.

Replacing old-fashioned incandescents with more efficient, longer-lasting bulbs not only protects consumers' pocketbooks, it also reduces the carbon pollution that causes global warming. UCS estimates that if a family living in a typical home switched all their bulbs, they could cut their carbon emissions by more than half a ton annually.

"If every household across the country replaced even one traditional incandescent bulb with an energy-saving model, we would reduce global warming pollution by more than 90 billion pounds over the life of the bulbs," says Jeff Deyette, a UCS energy analyst and co-author of Cooler Smarter: Practical Steps for Low-Carbon Living. "That's the equivalent of taking 6.3 million of today's cars off the road."

Burgess's amendment is more theater than anything else, given that U.S. lighting manufacturers are complying with the standards, enforcement funding or not. According to Ohio Democrat Marcy Kaptur, however, the amendment helps foreign manufacturers that are still producing Edison-era incandescents -- and hurts U.S. firms.

"Given that American manufacturers have committed to following the law regardless of whether or not it is enforced," she said on the House floor, "the only benefit of this ill-informed rider is to allow foreign manufacturers -- who may not feel a similar obligation -- to import noncompliant light bulbs that will not only harm the investments made by U.S. companies, but place at risk the U.S. manufacturing jobs associated with making compliant bulbs."

No other House member commented on the amendment, and it passed by voice vote, making it impossible to know exactly who approved it. Given how dumb this amendment is, it's not surprising that House members preferred it that way.